Razer, Inc.‘s social media manager thought it would be funny to post a “Ugandan Knuckles” meme as a way of promoting its brand. In doing so, the gaming accessory company stumbled into a long, difficult conversation about bigotry in gaming.

On Saturday, Razer posted the meme to Twitter, taking the opportunity to admonish its fans and onlookers in advance for any perceived oversensitivities.

“1. We didn’t make this, so don’t give us any of that tired ‘fellow kids’ bs. 2. It’s still January, and this is a January meme. People are still hyped. It’s gonna be ok my dudes,” Razer tweeted.

They then thanked the creator of the meme, which includes the caption, “Razer is de wey.”

The “Ugandan Knuckles” meme started on Twitch, according to Know Your Meme. A streamer named Forsen mashed up a goofy squashed drawing of Knuckles the Echidna with a joke from a Ugandan comedy film, Who Killed Captain Alex?

Now, “Ugandan Knuckles” is a vehicle for jerks on the Internet to mock the languages and accents of various African nationalities.

It’s hard to believe that the social media manager at Razer didn’t know that the meme is racist. But when people started to criticize the company, they doubled down, making fun of their critics. 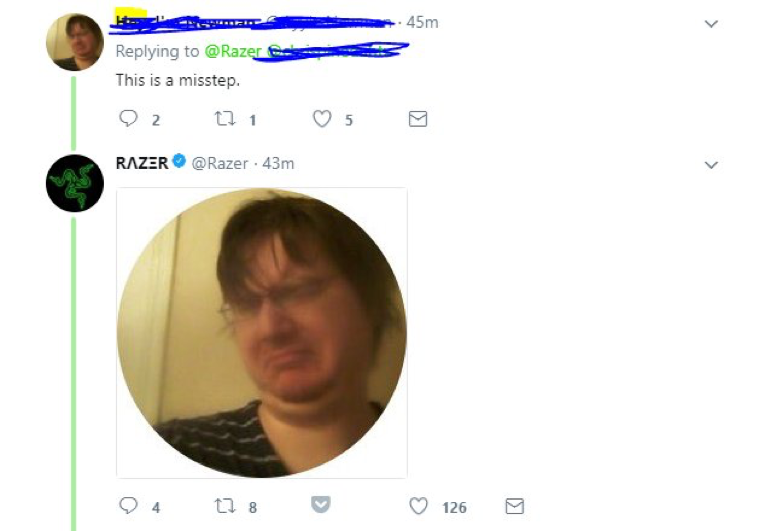 “We’ve been doing it forever,” Razer tweeted. “@Wendy’s just got famous for it because it’s ironic. It’s not ironic when gamers banter like this with each other.”

Setting aside the cringe factor of watching a multinational corporation try to defend their own actions by pointing at another brand and saying “they started it,” Razer’s accidental insight is unexpected and enlightening.

Bigotry is endemic in the gaming community

Razer’s motto is “For Gamers. By Gamers.” It traffics in precisely the kind of atmosphere it thinks “gamers” are into at any given moment. Unfortunately, gaming’s current moment is one where racism and other forms of bigotry are more or less tolerated, if not welcomed outright.

Meanwhile, outside pressure is forcing companies that cater to the community to pick a side. Last week, Blizzard, the Overwatch League and Dallas Fuel suspended a player for making a homophobic comment on-stream. The Washington Post wrote about the incident.

We shared a tweet from a member of our community. It was highlighted to us that the meme shared may have negative undertones.

We reached out to the user who clarified he was unaware of the connotations and had no ill-will. Both parties decided it best to remove the content.

We will endeavor to be more mindful of memes in the future and we thank those whom have brought it to our attention.

Be cool to each other online, and IRL. That is truly the way.

The gaming community is currently at a crossroads. It can reject bigotry, opening its doors to all and making gaming better as an experience. Or it can embrace bigotry, relegating itself to history’s dustbin.