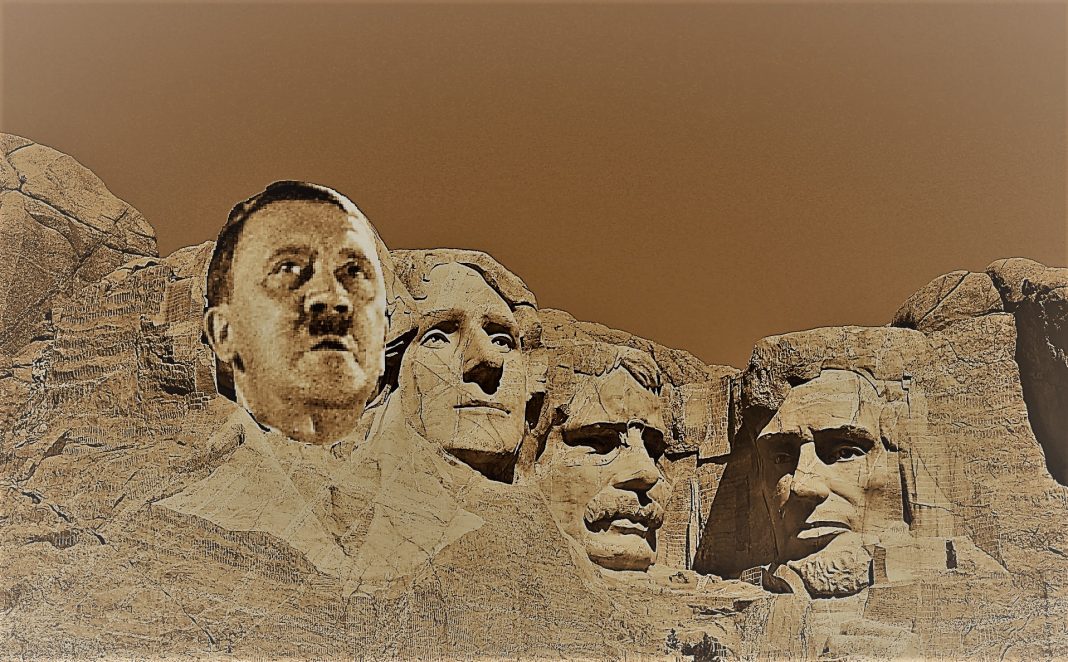 Europa Universalis IV is a complex beast of a game. It has endless possibilities, made even more impressive thanks to the modding community. The Extended Timeline mod, one of the most popular, adds in a massive amount of content by making the game playable from 58 AD all the way through to the present day. This is accompanied by an array of unique events and decisions for almost every nation.

Given this exceptional toolbox to remake history, I set out to create an alternative history by stopping World War II and making Hitler a great leader. The ramifications of this could change the world massively.

Hitler: The One and Only Führer

Taking control of Adolf Hitler on the day of his inauguration felt like the best place to start turning the tide of history. Having adopted the ways of freedom and democracy, Hitler looked towards world events to decide the best course of action. The first hint that strange things were on the horizon was when the USA decided to colonise Australia. Apparently in this timeline, President Franklin D Roosevelt is a warmongering psychopath.

Hitler made sure that he would be the first and last Führer of Germany. The plans were in place to re-establish Germany as a constitutional monarchy after his death. During his lifetime, however, he strove to firmly place Germany as a strong power in Europe without sacrificing the needs of the people. He set his sights first on Latvia, not to invade, but rather to peacefully offer vassalization. They seemed keen, seeing Germany as a strong ‘big brother’ to protect their interests. Power can be gained without resorting to violence. This, Hitler understood. 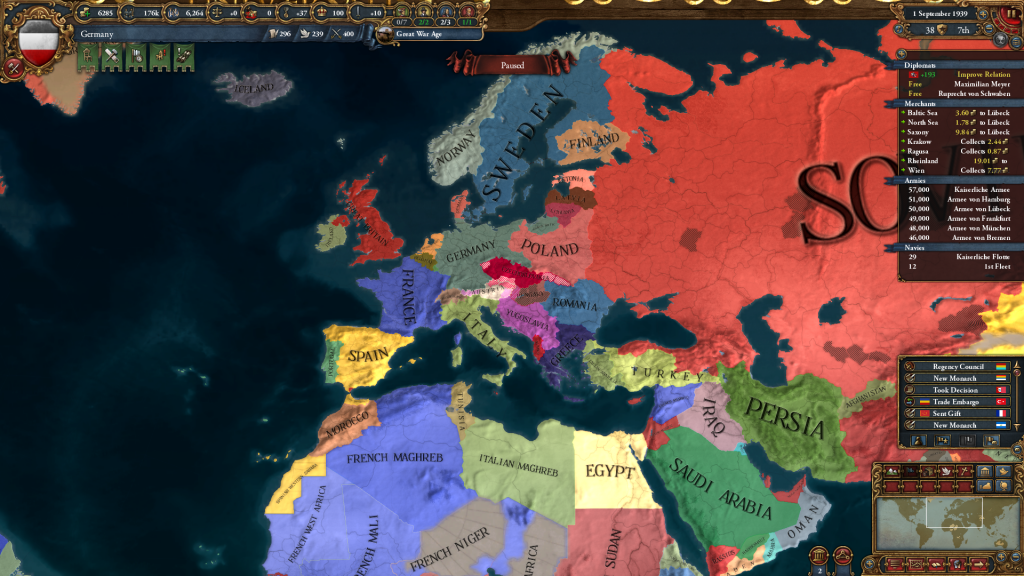 On the 8th October 1938, the Führer died. As per the late, great Hitler’s plans, the monarchy was reestablished. Emperor Karl V Albrecht von Signau took charge of a grieving nation. He vowed to continue the work of Hitler and steer Germany towards a bright future.
By September 1st 1939, the date that World War II should have begun, the world was in relative peace. From this map, it’s clear to see that Germany proved to be the least militaristic and empathetic nation in Europe by not sweeping in and conquering smaller nations such as Poland.

At this point I placed the game into observation mode so that the world could be left to change without my interference.

As soon as the AI took charge of Germany, they declared war on Poland. Clearly the AI sees the same benefits in invading Poland that our timeline’s Hitler did. In little more than 2 years, Emperor Karl the Merciless tore through Poland and claimed their land as his.

World War II ended in 1945 in our timeline. In this alternate history’s version of 1945, tensions are mounting between the major powers in Europe. Meanwhile, America owned half of Australia, with Chile being fully conquered except for Easter Island. At this rate, the apocalypse will be inbound in the next 20 years. 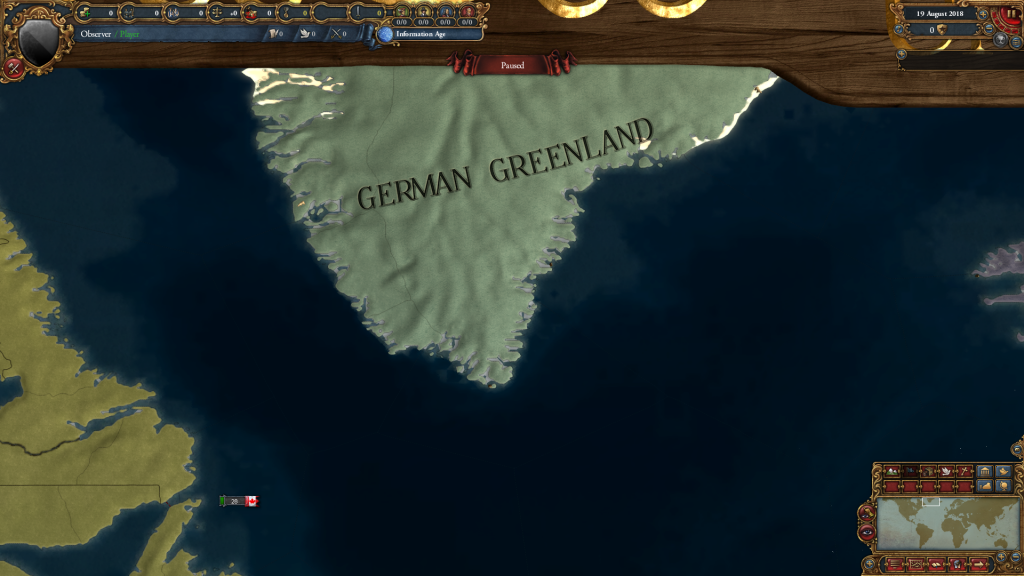 The 1950s arrived with little to no fanfare other than the new invaders of Australia being Portugal. Following the AI’s thought process is extremely difficult. Emperor Karl had his sights set on Poland again, proving that he isn’t the successor to Hitler that the people wanted. The lack of Fascism has meant a lack of empathy and respect for the common man. His reign marked a new, dark path for Germany and they gained vital land such as Greenland.

A World in Ruin

Fast forward to August 2018 and the world is in a state of chaos. Great Britain is struggling to maintain their empire whereas the French empire is thriving, especially in Africa. The USA has lost its footholds in Australia and South America. However, they have started to make gains in Indonesia. The Soviet Union is still going strong and the United Arab Emirates have formed an Arab super-country, the likes of which the world has never seen. Meanwhile, Brazil have conquered almost the entirety of South America. Due to the increasing relevance of nuclear weapons, the world would most likely be a nuclear wasteland and in a state of perpetual war. 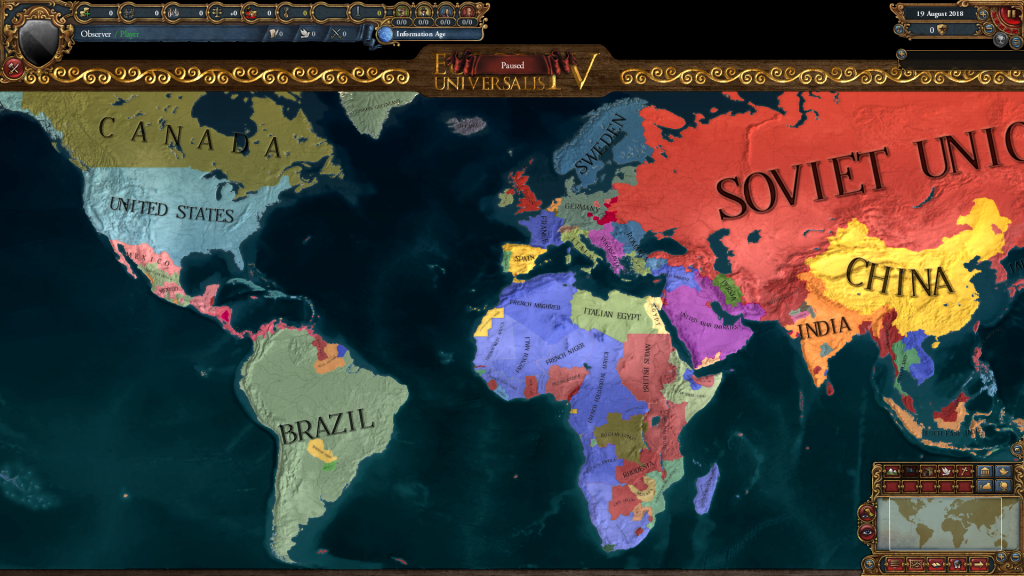 Through the use of Europa Universalis IV’s extremely realistic simulations and cutting-edge AI, it has been proven that Fascism is in fact a necessary part of society. The grown men who dress up as Nazis and parade in our street are actually saving us from ourselves. Next time you see a Nazi in your area, shake his hand and tell him, “Keep up the good work, son.” As we know now, unless Hitler had passed his many controversial laws, the USA would elect a warmongering buffoon and Nazis would roam the streets that would soon be a nuclear wasteland.

Aren’t we all glad that hasn’t happened?