CHANGE, a successfully Kickstarted survival game that aims to simulate the experience of being homeless will hit Steam Early Access on September 18, and I’m deeply skeptical that it should even exist.

To be clear, developer Delve Interactive’s heart seems to be in the right place. They’ve said that CHANGE was inspired by their experience nearly becoming homeless during the hellacious development of their debut puzzle-platformer, Poncho. Their stated goal is to help players understand the challenges that homeless people experience on a daily basis; “to build empathy for struggling homeless communities around the world”.

How they could get it wrong

Those are fine goals. There are problems, inherent in the medium of games, that give me pause when considering an interactive take on homelessness though. For example, most (if not all) games have win and lose states; CHANGE is no different. Winning looks like finding a home; and food, mood and shelter meters remind the player what will happen if they fail.

The potentially problematic aspect of this design is that it appears to frame homelessness, first and foremost, as a personal challenge to be overcome, rather than as a complex issue rooted in systemic injustice. Manage the meters, beg and busk for change (get it?), and find shelter before nightfall and you’ll succeed. 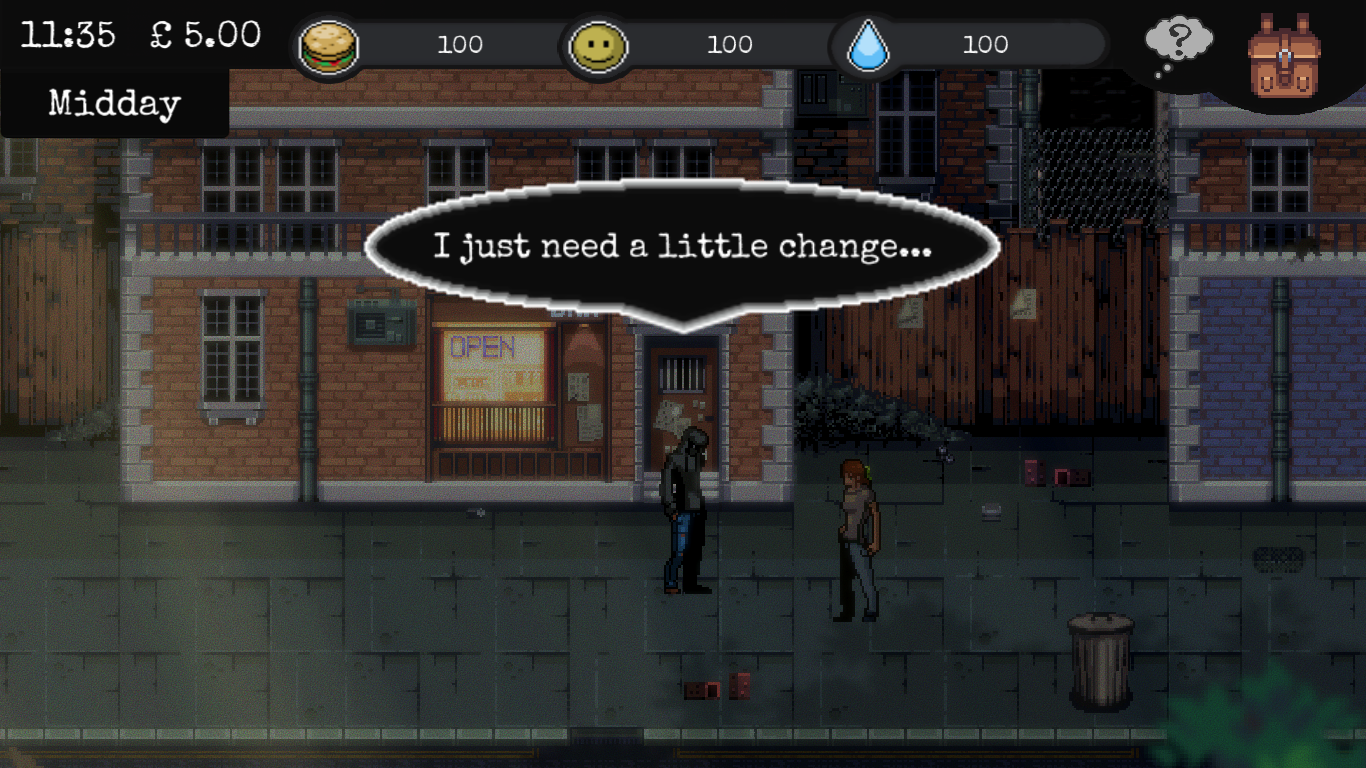 How They Could Get CHANGE Right

Some of the design choices guiding CHANGE seem to show a willingness on Delve’s part to wrestle with the ways specific genres may be better suited to tackle the challenges of homelessness, on both a systemic and personal level, than others. Obviously, as a survival game, CHANGE puts responsibility in the player’s hands to find food, water and shelter. This seems like a natural fit; an easy way to communicate the calculations that take place when a person has to prioritize basic needs.

More interestingly, Delve’s decision to include roguelike elements suggests an understanding of the systemic issues that keep people homeless when there are enough empty houses in America for each homeless person to have SIX. Roguelikes, as a genre, are uniquely situated to tackle the malignant bureaucracy that makes and keeps people homeless. Despite the fact that a complete run through a roguelike like this month’s Dead Cells will rarely last longer than an hour, while I was playing Dead Cells for review, I spent 36 hours on the game and still hadn’t finished it.

The destination is never far away, yet roguelikes make the path there tortuous. That seems like a good metaphor for the illogical, labyrinthine nature of American oppression. If Delve approaches the subject with care, they may be working with something potent.

However, what they’ve shown off in the alpha demo isn’t there yet. In this early version, the “roguelike elements” are limited to the same five or six buildings and character models endlessly repeating. When the game enters Early Access in a month, we’ll get a better look at what Delve is attempting.

I may be skeptical, but CHANGE exists. I hope the developers at Delve know what they’re doing.