Home Read Dropsy: The Game About Kindness That We Need Right Now 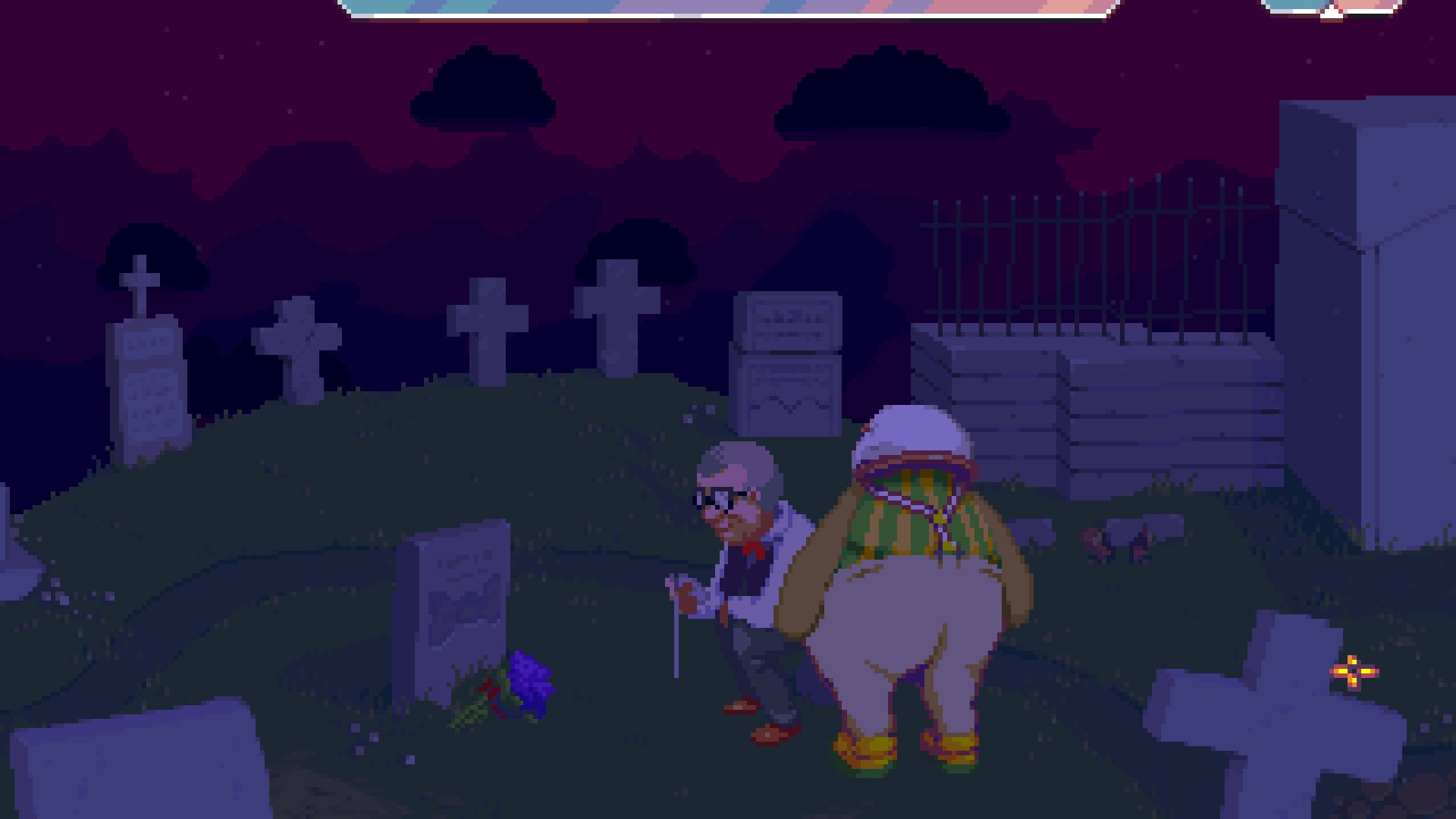 Dropsy opens to the scene of a lit cigarette falling on a trail of oil; it catches fire, and a circus burns. The sole survivor, Dropsy the Clown, with his three yellowed teeth and unsettling countenance, is naturally blamed.

Bumbling around the town after the incident, Dropsy faces a variety of civilians. Each of them has a distinct problem, and a distinct attitude towards Dropsy himself. The majority dislike him. Some outright hate him. The only characters that have an initial friendliness towards Dropsy are his dad and his dog. Dropsy’s world is endlessly conflicting―his colorful, buoyant view clashing with the dreariness of his neighbors. Further, with no dialogue, you’re left with a lot of questions. My first question came within minutes, and stayed with me throughout.

While clowns themselves are unsettling to many, the illusion quickly fades when they take off the costume and makeup. With Dropsy, the façade seems permanent. It is impossible for the people in the town to detach him from his appearance; instead, it is a lasting (perhaps lifelong) part of him. Even so, the townspeople can’t hide their visceral reactions to his looks. As you enter a playground, a child runs away, screaming. Dropsy frowns, but it is brief. He may as well be used to this.

This is a recurring theme throughout his many encounters. Dropsy’s main motivation is to hug everyone he can, but few let him, save a squirrel, his dog, and a handful of inanimate objects. No one in the game wants his help; in fact, many would prefer if he stayed far away from them. Nevertheless, Dropsy wants nothing more than to change their opinions. His days are spent foraging dumpsters, digging up flowers and buying cassettes all to appease the undeserving populace. Faced with unrelenting discouragement, Dropsy meets their anger with unabating optimism.

Dropsy’s story, taken as a whole, is one about being misunderstood. It’s a story about loss. It’s a story about living in a town―maybe even a greater society―that sees you as dangerous, something to be used or disposed of. He lives as a social pariah, his looks predisposing those around him to see him as less than.

Yet, more importantly, Dropsy’s journey is one of overcoming this boundary. He refuses to let people be complicit in their preconceived notions. It doesn’t matter what he is or where he comes from, he will give you a hug until you don’t care anymore.

Dropsy succeeds because, despite its psychedelic, dream-like setting, it exists within the same reality that we all do. We all discover at some point that while human-ness is biological, humanity is ill-defined. We view the world from within the chains of our own perspective, capable of dehumanizing others for whatever trait we may see as un-human, unsophisticated, unsafe. Dropsy may not be human (in fact, it’s imperative you play this game to answer that question for yourself) but we are. If Dropsy has any message, it’s that sometimes you need to take off your self-imposed clown goggles, look around, and give someone a hug.