Home Read Queer Glitches and the Outlaws of Meaning 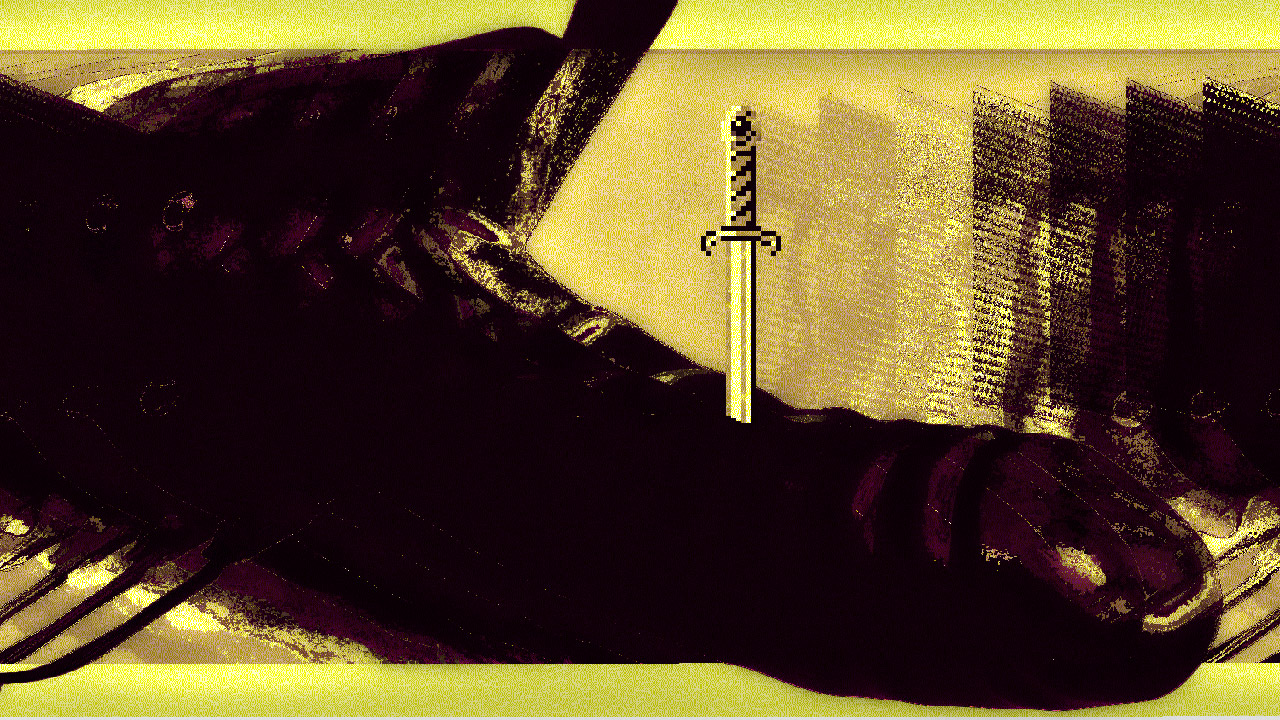 So there’s this point amid one of speedrunning genius Narcissa Wright’s cataclysmic all-medallion, any-percent tear through The Legend of Zelda: Ocarina of Time that has the hallmarks of a legitimate act of sorcery.

‘Okay, now this part is a little confusing,’ Narcissa says near minute 47. Utterly failing to contradict herself, she starts by dropping a fish from a bottle and catching it again. ‘I’m gonna try to play my Deku stick, which it’ll dupe over because I don’t have any,’ she continues, if that means anything to you. ‘That’s gonna write a bottle over my B button, which also sees that I have the fish, which wrote 20 Deku nuts [into my inventory].’ Next she throws seven Deku nuts – no more, no less. ‘And now I’m gonna drop another fish. I’m gonna catch this fish.

The result is the Bottle Adventure, in which – by a Goldbergian pathway from bottle to fish to number of Deku nuts – the game’s memory is overwritten directly, thanks to a peculiarity of cutscenes, to place a game-breaking spell where Link’s sword ought to be. Uh, yeah. You should really just watch the whole thing.

If you’ve ever had a go at Ocarina of Time, this is perhaps one of the most disorienting playthroughs you’re ever likely to see. That’s because it is in a sense an occult feat – in the literal sense of engineering results through manipulating ‘covered’ mechanisms. Wright’s wrong-warping run folds the game in on itself and punches tunnels through its carefully constructed causality in masterful ways. This is glitching, and I think it’s time we recognised the practice as one of the more important human endeavours. 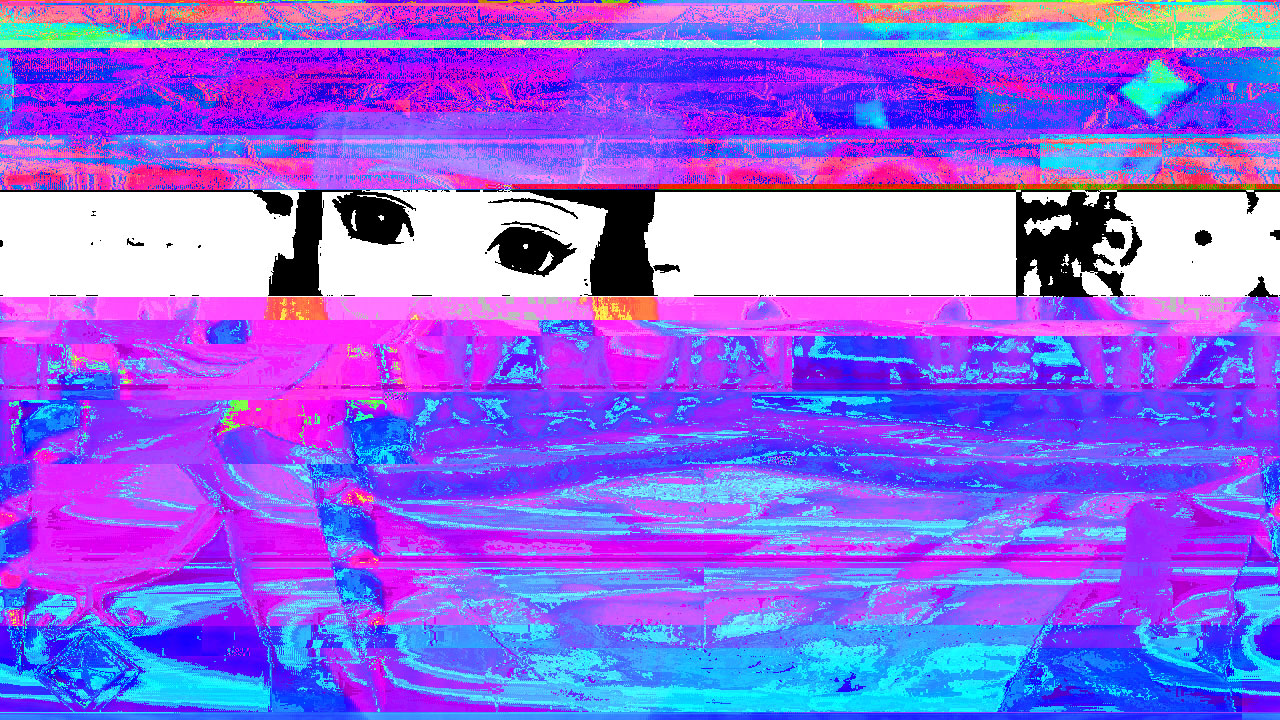 I’ll be the glitch.

I’ve always felt a sense of slippage in the world. As genderqueer (among other things) I often feel, in fact, like an array of glitches more than a single awry byte. And indeed I’m treated by many as essentially broken, an undefined variable that is not a cipher but an object out of bounds. This draws, inevitably, the reticles of any number of humanity’s self-appointed quality testers and attendant bug fixers.

See, I like to do and wear things that are apparently reserved for ‘women’, not ‘men’ (one of which is apparently what I am without, apparently, being enough of one). As a result a lot of people want to injure me. Some people threaten to rape and murder me because I’m wearing a lace dress on a train and also I have stubble and just what the fuck do you think you’re doing, dude. The threat level is directly proportional to degrees femme: people will merely stare if I’m wearing, um, only eyeliner? But they will train the focal point of communal violence upon me if I am egregious enough to fly fully the colours of transfemininity.

On the other hand, I’m confronted continually by the opinion that presenting the way I want to is a frivolous, laughable act.

I’m not fucking joking. Trans women, as I’m sure you know, are a demographic under disproportionate threat of murder and suicide. They’re also, and this is important, one of the most laughed-at demographics. 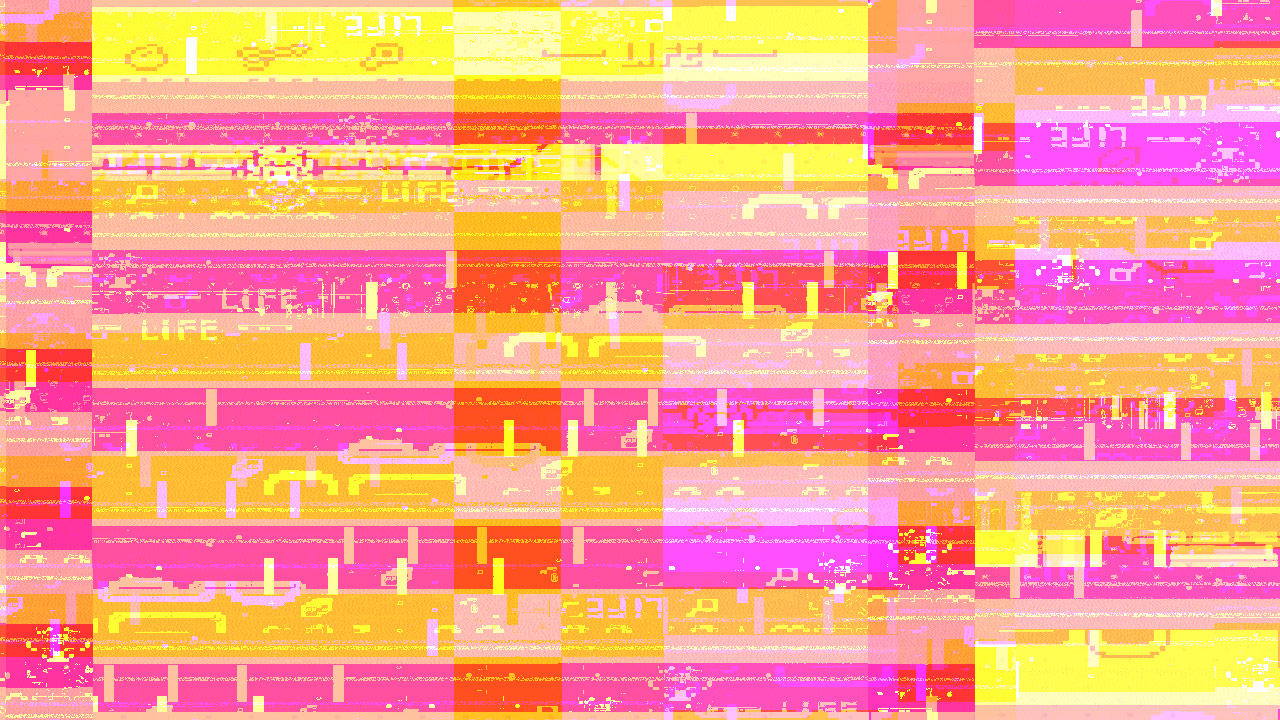 A good many internet commentators appear to feel that glitching is a frivolous act synonymous with cheating. Yeah, so, about that.

Cheats, by and large, are used to make games easier. Often an intentional leftover from playtesting, they are usually simple to execute and intended to bypass some metric limit (number of lives, say) while remaining tilted toward playing the game its creators laid out.

Glitching is breathtakingly difficult, demanding such things as pixel-perfect positioning, frame-perfect timing, and knowledge of how to manipulate a game’s underlying code in unintended ways. These things require serious dedication and nigh-obsessive practice, in other words. Evidently the goal here is not to make the game easier, but to play a different game.

The speedrun is just one use for glitchery. Others use glitches in a more exploratory or aleatoric fashion. Take the Glitch World in The Legend of Zelda: Link’s Awakening – or the abandoned zones of World of Warcraft, which call to my mind the UrbEx movement of people who break into abandoned buildings for the pure joy of exploration. This is glitch for glitch’s sake, following in the juddering, pixel-smeared tracks of that long-hallowed tradition: the celebration of error; laying claim to the legitimacy of wrongness, of weirdness, of brokenness – the very things we  ̰̖̱̰̖̈́̐͢.

Glitching runs counter to creational intention in that it utilises slippages that were (almost always) not expected or desired by a game’s author.

And right on time, here’s where the next round of criticism tends to start ricocheting off the sidewalk: what’s the point? Why put all this time and effort into ruining something? This is not how things are meant to be done. This is not as the creator intended. And anyway, it’s all just, I don’t know, weird.

Do you see the problem with this rhetoric? Repeat the questions, but swap games for, oh hell let’s go with gender.

Yes, that’s the unmistakable tang of cordite in the wake of a drive-by moralising.

But here’s the point: by seeking out and slipping through the seams of a game’s algorithmic fabric, glitch runners queer space, time and narrative in a way that is surprisingly salient to the ways in which we relate to this thing we insist on calling the ‘real’ world. Glitch runners function in a sense like digital outlaws, and their dissidence sheds light on dialogues of control, on social policing, and ultimately on how we construct (and deconstruct) our realities. When glitches fail, they fizzle; when they succeed, they provide singular shortcuts to new worlds of meaning. 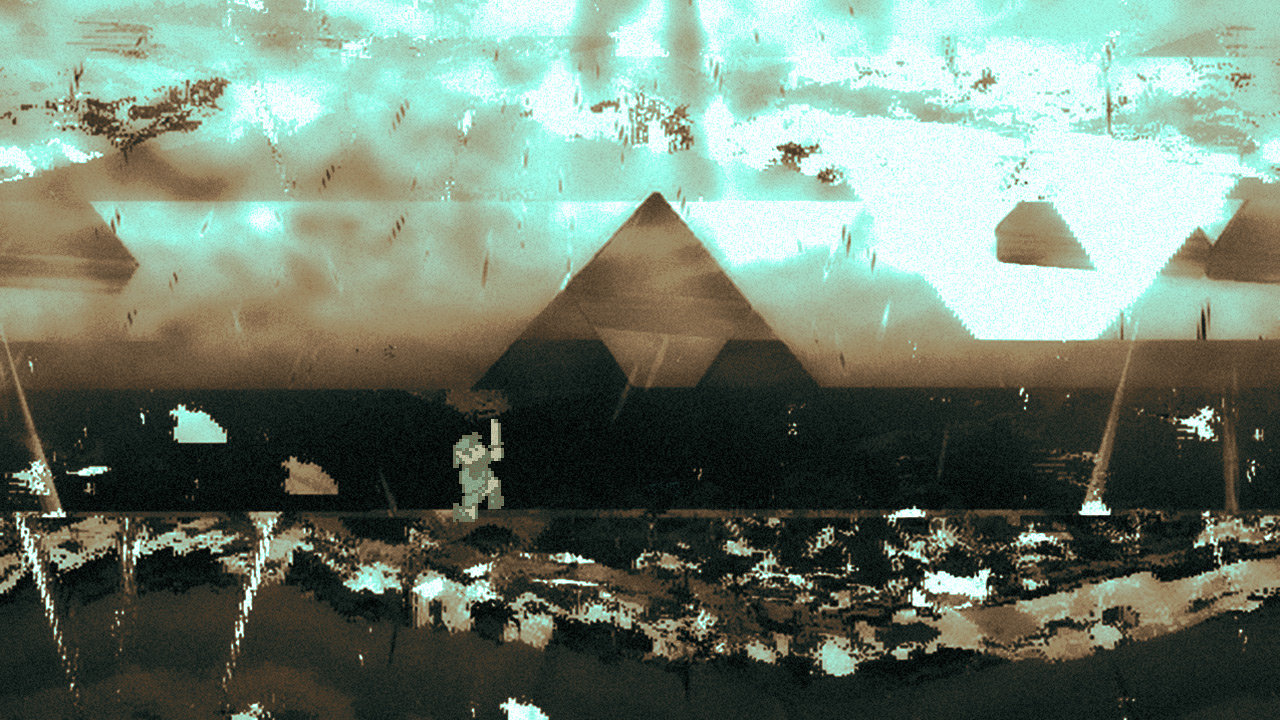 The Triforce of Experience

Collectively, videogames comprise a cartoon cartography of competing desires, teeming with the ghosts of actions taken and imagined, a distilled and denatured mythic landscape encoding the implicit vow that progress is both comprehensible and attainable. Lording over this all is a mesh of algorithms – algorithms that define everything from the planes and curves of virtual architecture to the behaviour of NPCs and the invisible gateways that define success. And as it turns out, the world outside the machine – y’know, this thing of flesh and bone and being, complete with breathtaking procedural generation and permadeath – really isn’t all that different.

Oxford grants us the following as a definition of narrative: ‘A representation of a particular situation or process in such a way as to reflect or conform to an overarching set of aims or values[.̨̨̨̨̨̨̨̨̱̱̣̱̱̱̱̣̱̱̰̱̱̣̱̱̱̱̣̱̱̓̓]’

Here’s another take: narrative is the skin we ease upon the bones and musculature that are space and time – the face we give to physics, that it may breathe and dream and laugh and weep. As relativity has taught us, time and space are inseparable parts of the same machine; story, at least as far as the representation of time and space are concerned, holds a similarly vital position.

Time, space and narrative are super interdependent things. Narrative relies on spacetime to provide the rules with which to construct itself – and without it we cannot make sense of spacetime, nor overlay it with the conceptual heads-up display we require to formulate the texture of experience and a sense of presence in the world. So as creatures of perception and model, we can only really consider the totality – the spacetimestory, to cough up a truly reprehensible word for which I can only but oh god I’m so sorry.

And okay true story: in the being and doing of experience, narrative is the most important of the three. As perceptual agents we can and do suffer glitches, distortions and outright cataclysms in our experience of time and space (ever arrived somewhere without remembering the journey?). We deal with these by retrofitting all that weird raw data with narrative; and it is with narrative that we directly affect the way in which we parse – and consequently effect change in – the world.

So here’s yet another take: narrative is the set of algorithms we use to create our worlds of meaning, a set of signs that connect and disconnect, that smooth and splice, that configure and reconfigure, setting up that liminal, mediated space that is a virtuality – a world entirely constructed but entirely real. 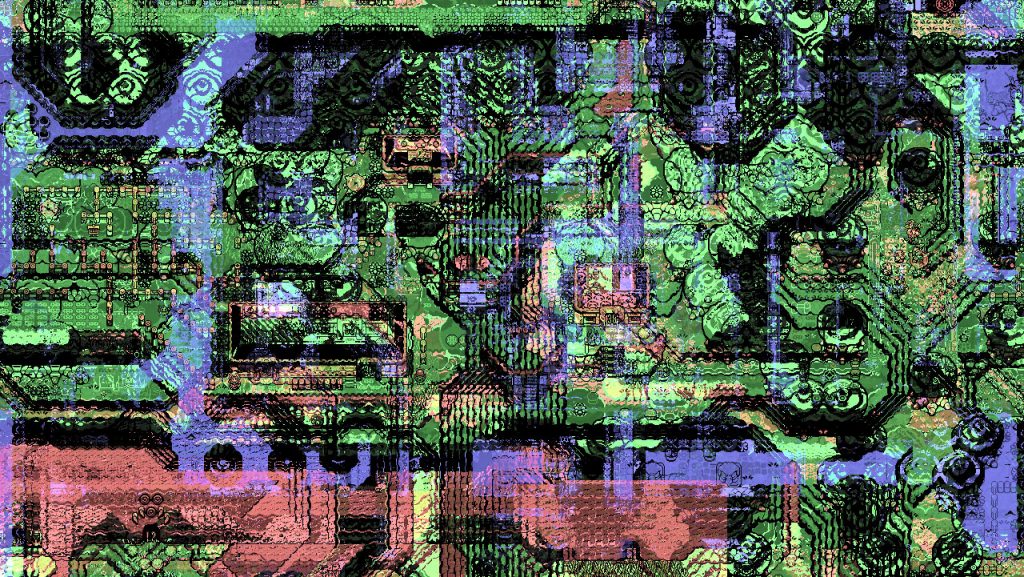 We’re surrounded by a net of tightly interlocking algorithmic narratives, and by virtue of their colonial lineage they privilege certain intersecting orbitals of people (to wit: healthy wealthy neurotypical Christian white cisgender men). It is imperative these arbitrary power structures be torn apart, and part of this decolonisation process requires the disruptive power of glitching – because these privilege systems work in such a way that following their rulesets precludes transforming them. ‘The master’s tools will never dismantle the master’s house,’ as Audre Lorde so beautifully once said.

The point is, the systematic and artful manipulation of narrative glitches is perhaps the greatest tool we wield in the face of terrible, necrotic power.

Those who attempt to crystallise perfection forget that it got that way because it fucking broke, and that to preserve it would only pull its broken, beautiful heart out.

I have only one thing more to say: I’ll begin this article the way I ended bɘ͊bnɘ͡q̉υ ʇı p̗̦̎ə̗͑́ṕ̗ͭu̗̠͐ə̟̗̻

Rogan is a transfeminine writer from South Africa with a penchant for staggering headlong into arguments over gender and decolonisation. She sinks a frankly worrying number of hours into old roguelikes and farming simulators, and spends the rest of her time wishing life were a roguelike farming simulator.