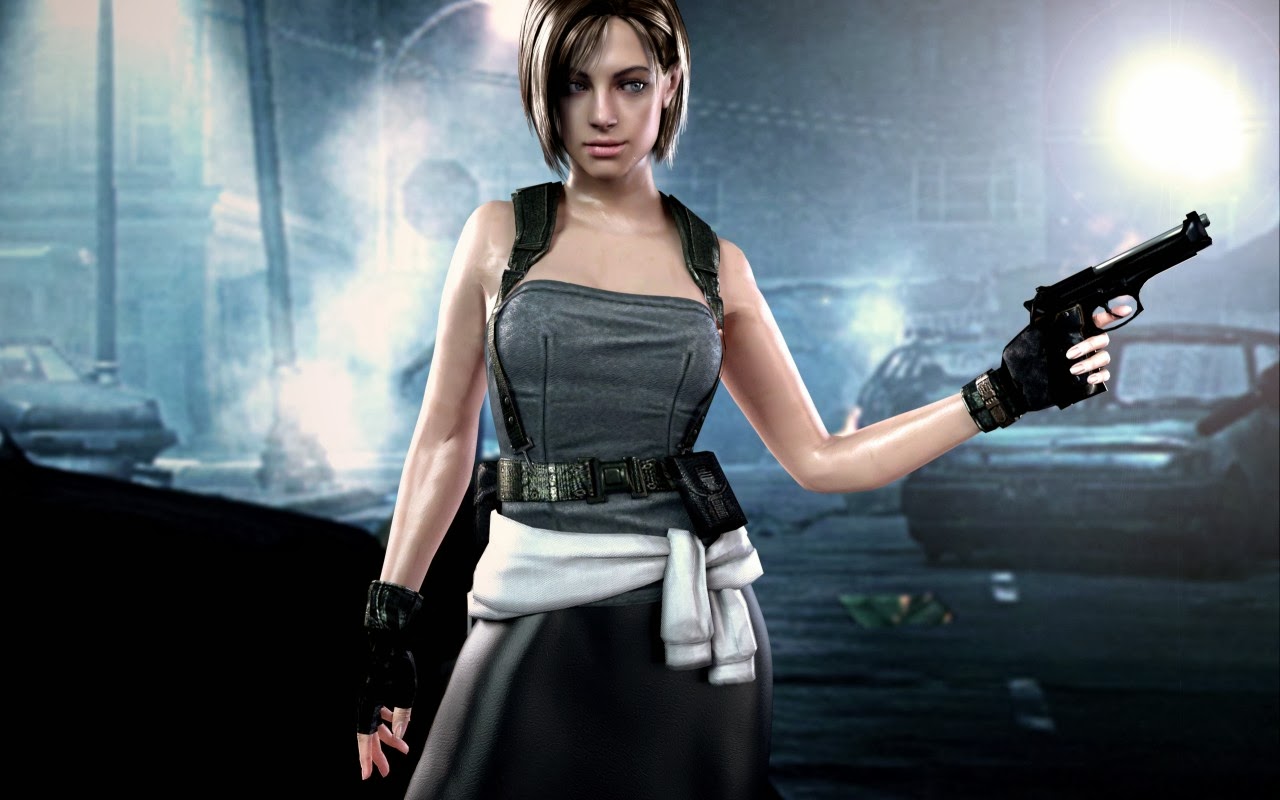 If you’ve played the Resident Evil games, you’ll notice the hallmark of the franchise has always been zombies trying to eat you thanks to the virus du jour. Now, when fighting bio-weapons in these games, you need to be prepared. This is obvious in the first couple of games. It’s important to follow the Raccoon City Zombie Survival Checklist:

It Ain’t Pretty, But It’s Still A Catwalk

Yes, for games that are all about survival, the female characters aren’t exactly prepared for the occasion. Guys have all the padding in the world to protect themselves. For the girls though, the city may be a zombie-filled mess but those streets are still the catwalk.

Let’s look at Jill Valentine. In Resident Evil 1, while not fully equipped with bite protection, we can forgive her because she had no real idea what she was getting into. So when she reappears in Resident Evil 3, you would think she would be finding the nearest suit of armour to climb into because she knows it’s the T-Virus.  She knows how it spreads and what a single bite can do. How does she walk around? Tube top, miniskirt, and long boots. Best choice ever, no zombie’s going to bite through that! 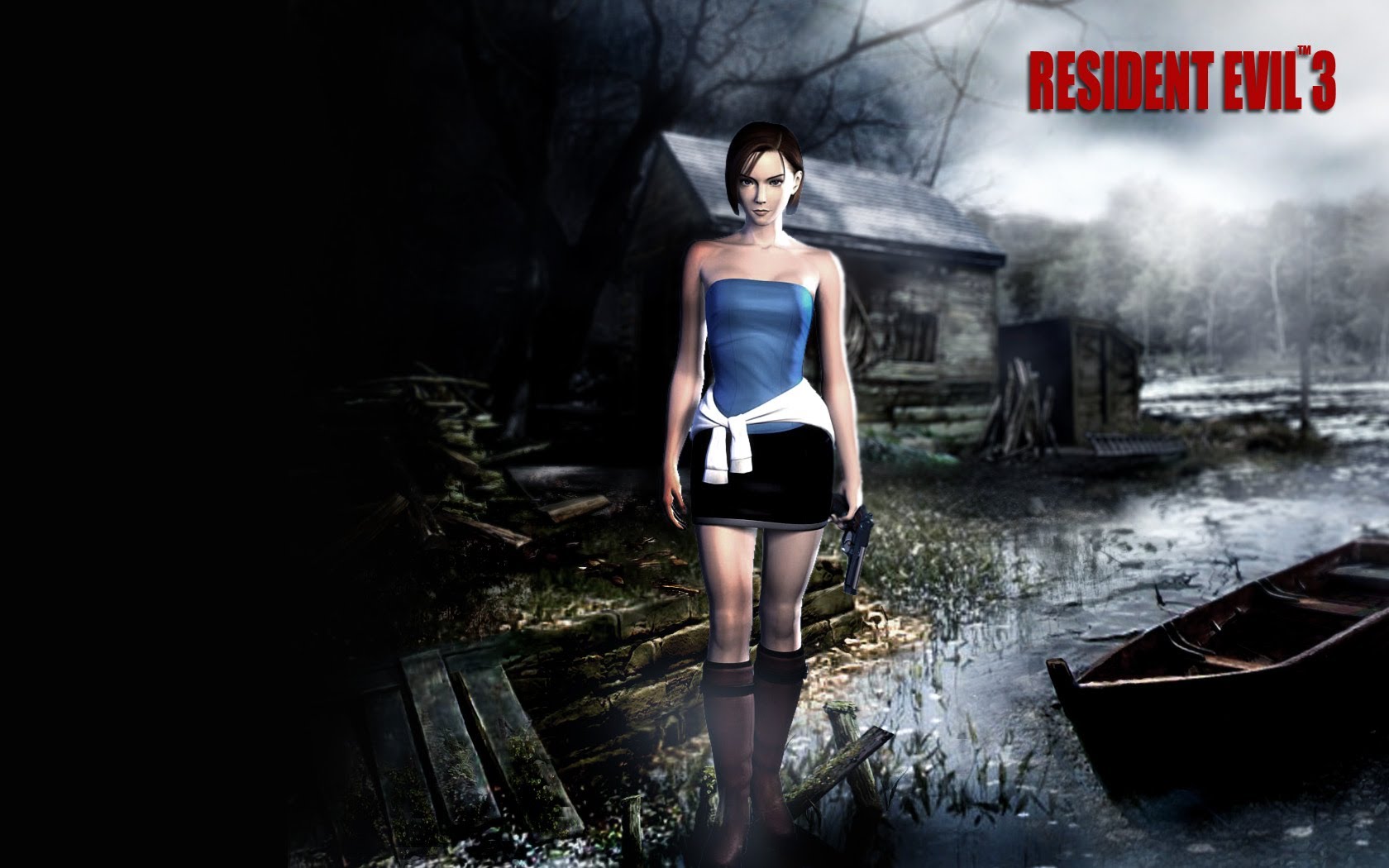 So why did they give Jill the pseudo-hooker look?

Two reasons come to mind. First, from a gameplay standpoint, she’s the main character. Most of the game is played as her and it appeared the developers gave her that wardrobe to make her stand out. She also has the invisible plot armour when it comes to getting infected. She can finish the story bitten, stabbed, scratched, slashed and vomited on but still won’t get infected outside of plot and turn into a zombie. Technically, the only thing that can kill her is player incompetence. Granted being unlucky can also be a factor because you need to be quick on the buttons to avoid the enemies.

Secondly, she’s one of the icons of the Resident Evil franchise and a role model for the strong, assertive woman in video games. With great titles, comes great responsibility.

However, this was in the age before DLC, so alternative costumes were either given out after the game was completed or through an item that allowed you to open up a previously-locked room or cupboard that contained the costumes.

The early Resident Evil games had this function as well and you would think, even as a joke, they would put in some practical clothing for female characters.

Let’s look at Resident Evil 3 again, as it is the best example. If you complete the game, you get the Boutique Key. Use it in a clothing boutique store and you gain access to Jill’s alternate costumes. What do you wind up with? A suit of armour or military-grade body armour at least? Nope, you get the following: 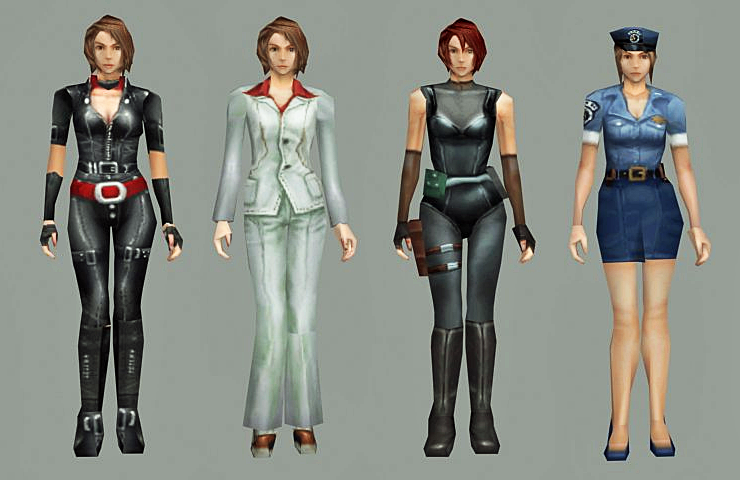 Jill’s Resident Evil 1 costume was my favourite but while it is pleasing for the practical observer, it doesn’t reward the player for choosing it over the more sultry options. Even a little bit of extra defense against damage would’ve been a selling point to players, especially on no-”You Died” runs.

I’ll admit, as a teenager rocketing through the doorway of puberty on a testosterone-fueled jetpack, the naughty officer was a nice addition and I did spend more than one game playing Jill in that outfit.

The Biker And The Spy

In Resident Evil 2, you have Claire Redfield and Ada Wong. Both have been given a wardrobe that best represents who they are as characters, but neither are very practical. Claire gets a free pass as she had no idea the city would be full of zombies. Ada on the other hand, knew full well of the zombies but chose the sexy spy wardrobe over a more practical outfit. Ada possibly regretted her wardrobe choice as she gets badly injured later on in the game.

In contrast, the male protagonist of that game, Leon, is wearing body armour. Outside of a well-placed neck bite or sharp claws, there’s not much that’s going to get through that wardrobe choice.

With the modern games, the ladies of the franchise have each been allocated a certain style, enriching the traits their characters possess. Claire with urban, Ada with the femme-fatale while Jill has practical outfits to fit her role as a field agent.

Capcom can’t necessarily be accused of mistreating their Resident Evil heroines, but at least they’ve made steps to make sure that the women now actually look the part when they fight the next wave of zombies.

G'day, my name is Peter Gassner, a New Zealand-born Australian who has played through the video game scene since the NES days back in 1993. Name your console, I've either played it and/or owned it. I'm also an avid sports fan because that's just the done thing in Australia. In my spare time besides gaming, I build on my manga collection and spending the boring hours on Crunchyroll. I've also been involved in LGBTIQA causes, particularly after I found out I was intersex last year. I've also been highly interested in exploring video games portrayals of men and women.