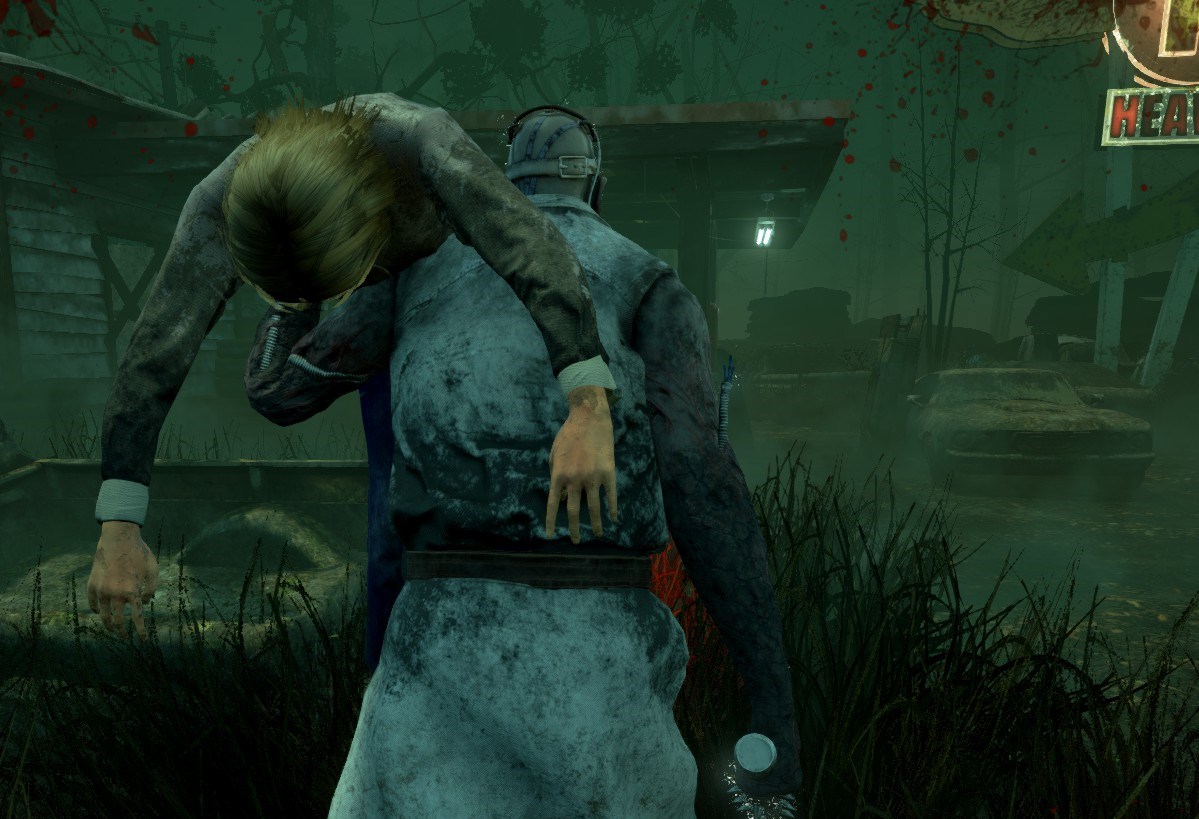 The wooden-pallet crashes down, stunning my Killer character and giving the Survivors a chance to scatter like scuttling spiders. I mutter and swear as I destroy the barrier, before setting off in hot pursuit of a straggler. He dodges and weaves incredibly well, managing to lose me in a tangle of hay bales and dilapidated wooden walls. Moments later, a siren goes off as the exit gates power up. I swear more forcefully and race off towards one, my heart hammering, my mind berating me for being so stupid. I’m not going to be able to get a single sacrifice, and I know it. This is the nature of Dead by Daylight, the four versus one multiplayer survival horror game from Behaviour Digital.

I enjoy playing both sides of the divide, the fragile yet versatile Survivor who must power up generators and escape the level, and the indestructible Killer who must introduce them to his bloody hooks in gruesome sacrifice. My heart does lie on playing the Killer role the most however, and strangely, it’s more stressful than being a Survivor, for me at least. Survivors have a number of tools at their disposal, not to mention increased numbers, while the Killer is operating alone with lots of possible places to patrol and search. The win state that enables ranking up is to get enough hooks and sacrifices as the Killer, and this isn’t as easy as it sounds.

The opening paragraph of this article could have been from any match I’d played in my first twenty or more hours of the game. I’d almost strain at the keyboard as I tried to catch my prey, my heart racing with adrenaline, my hand a claw on the back of my mouse. I’m not an angry, driven person, I just found it hard to play the game in a more relaxed way. Then, by way of the game’s Daily Rituals, I found my path to a play-style that suited me, and also, that had implications for the way I pursue other things in my life. 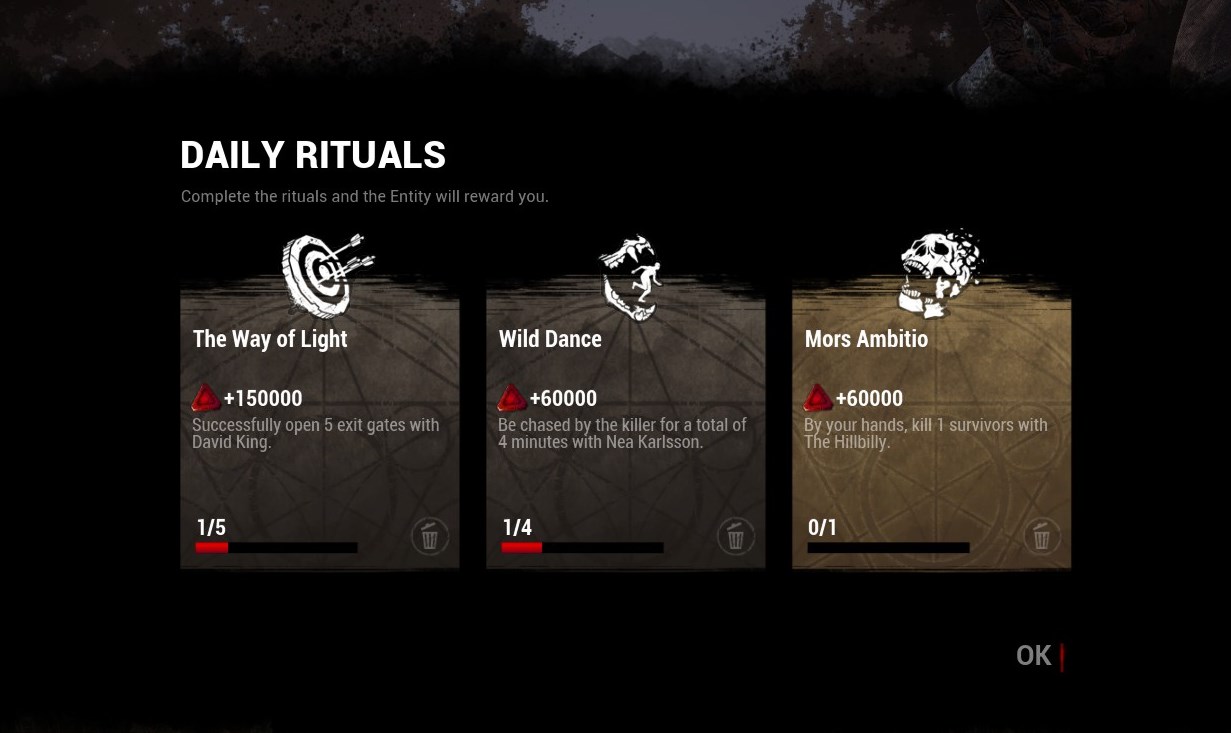 A Nudge in the Right Direction

Dead by Daylight offers players a Daily Ritual, a task that they can achieve for a big haul of Bloodpoints, the game’s levelling up currency. This might be, in the case of a Killer, to use their special ability 11 times, or to get 4 sacrifices. I enjoy these rituals as they give me the chance to earn extra Bloodpoints while playing characters I’m not used to, or doing things in-game that I might not usually bother with. It was while trying to complete one of these rituals that I realised I was no longer getting stressed and annoyed while playing. I had more than one goal to work towards, and this gave me options.

The importance of skilful goal-setting is often talked about in much self-help and business literature. You need to find an over-arching goal to aim for, but also to break it down into small, actionable steps, possibly adding other ways and paths that will also aid you in reaching it. A bit like trying to drive somewhere and taking a detour that still gets you to where you were aiming to go.

As far as Dead by Daylight, no longer did I only have the win state to aim for, I had tasks to do that would boost my levelling progress, and also give me more than one thing to think about while playing. Yes, I still tried to catch the Survivors, but now every pallet drop was extra points and every Survivor lost a chance to work towards another option. I seemed to have found a way to get to the intrinsic reward available for playing, and, as a consequence, the fun. 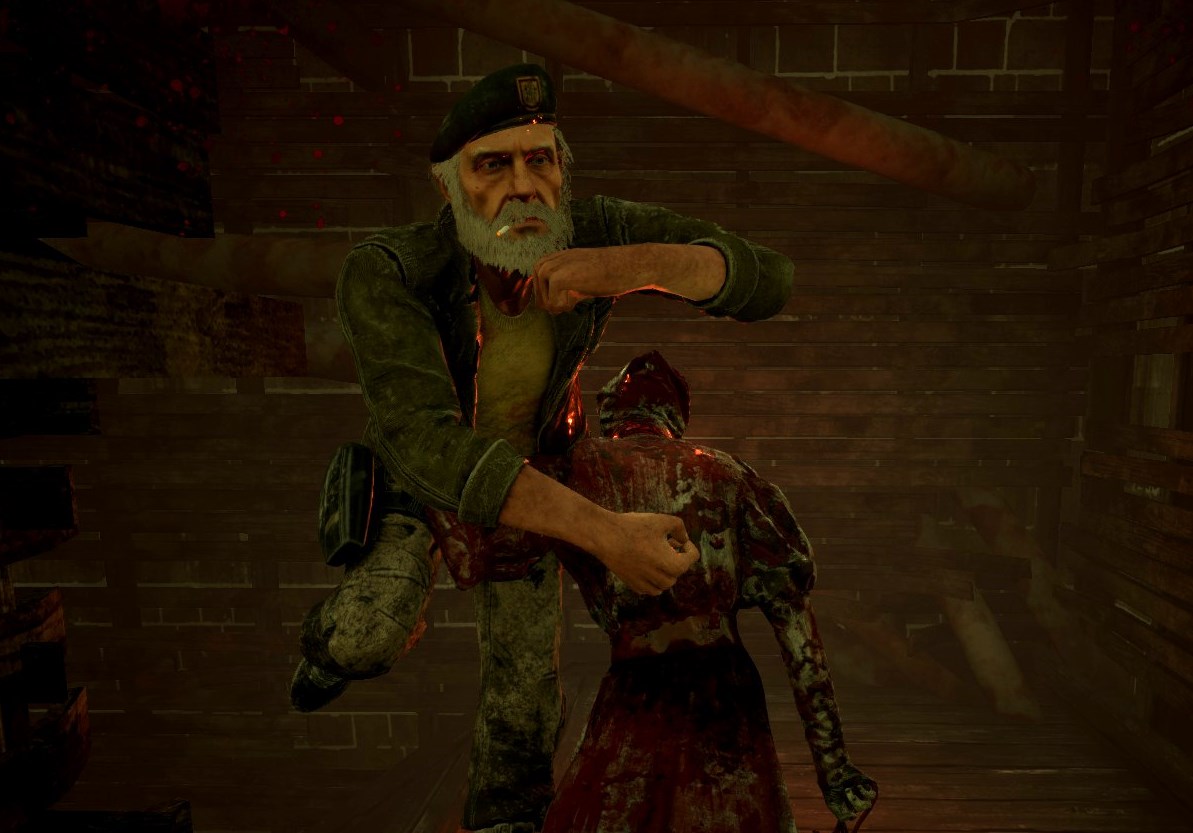 Finding intrinsic reward in the things that we do means not looking for any more from our actions than the actions themselves. Or to put it another way, you don’t need a certain result to arise to be content or happy. A great analogy is writing. Sometimes, you can fall into the trap of only writing for the rush of being published or getting paid. Those periods of time are harder and more stressful than if you can at least find some joy in the writing process itself. If you can find that joy, the results you hope for may never happen, but at least you feel some sense of reward, and hopefully mastery, from the process itself.

Dead by Daylight, by way of it’s Dailies, reminded me to play for more than just the win, and in the process, I found myself enjoying more elements of the game. The extrinsic reward the game provides for completing bonus tasks gave me the hint to be more diverse in the way I played. With the blinkers off and more things to aim for, one individual thing, in this case, winning at all costs, didn’t seem to matter so much. I’d imagine if there were too many things to aim for however, overwhelm and apathy would probably ensue. The drip feeding of Dailies in the game insures that this doesn’t happen.

The more frustrating moments often found in Dead By Daylight began to seem funny, especially when I was enjoying the act of playing, whatever the outcome might ultimately be. There was always something to get out of whatever was happening, whether it was more Bloodpoints, more progress towards a Daily, or just the thrill of the hunt and seeing people scatter as I approached. It also seemed to immunise me towards things like Survivors “tea-bagging” when they were at the exit gate, knowing that I couldn’t get them. Rather than getting annoyed, I found it cute that they thought that I got nothing out of the game, or that they’d thwarted me in some major way. I even started to feel this way when I had no Dailies to work towards, and just set my own little aims instead. Let’s also not forget that winning means nothing without losing sometimes too, so the wins, when they come, are the sweeter for it.

The wins actually came along even more frequently. That was another enjoyable thing about playing in this way. It relaxed me, I enjoyed the game more, and even though I wasn’t striving to the same degree, I found myself winning far more often. I never really felt overly concerned about ranking up in the game, but I obviously cared more than I thought to feel so irked when victory was snatched away from me. I’ve been playing this way for a while now, and it’s still rewarding in a way that purely chasing wins can never be. 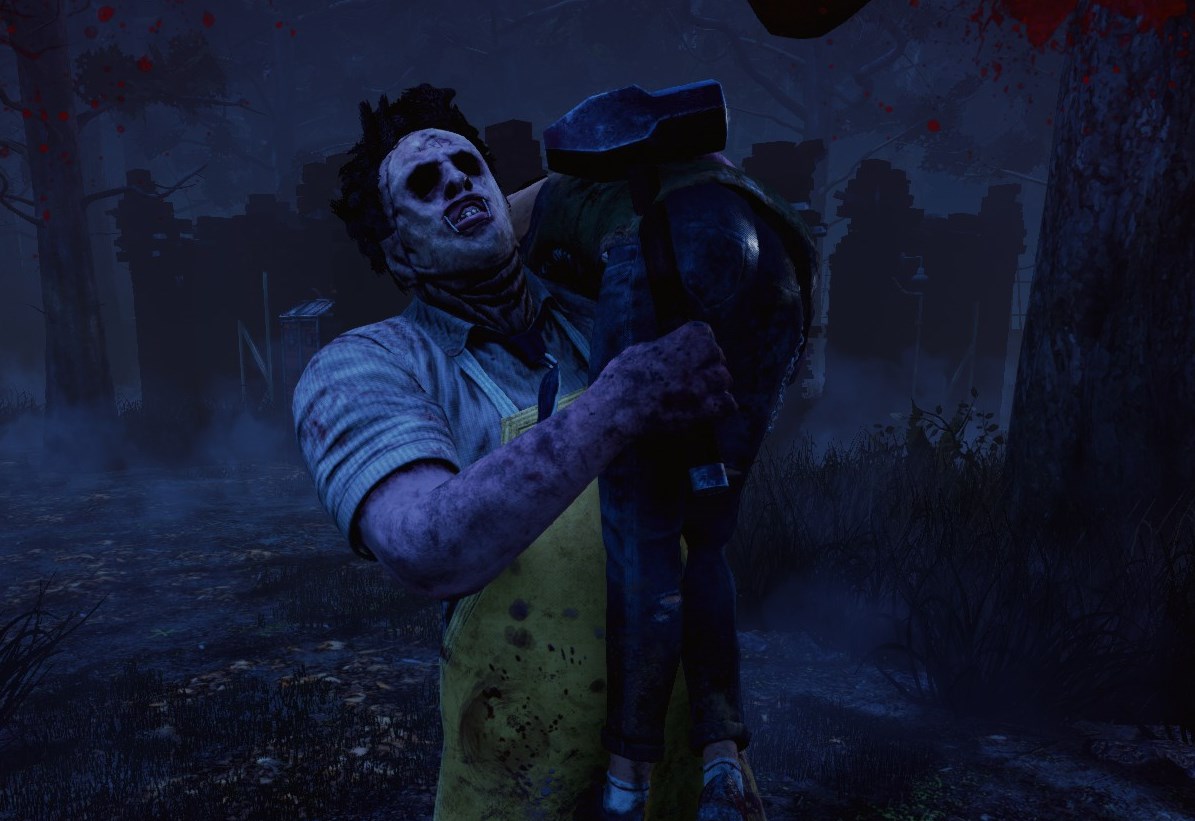 Applying it Away from the Screen

This whole change in outlook towards Dead by Daylight led to me pondering why it seemed so much harder to do this in my non-gaming life. I’ve known what goals I’ve been working towards for a long while now, I’ve even broken a few down into smaller actionable steps and started to work through them.

Part of the reason could be the way that games present your progression to you. Most of the actions you do can be given a number or metric, a snazzy sound effect, and blooms of light when you get that next level or unlock that new skill. Real life isn’t like that. Maybe if it was, we’d all achieve more. I know there are apps that gamify things like To-Do lists with achievements, and weight loss goals with little badges, but that can all seem quite diluted when compared to an artfully designed game world with graphics and sound that grab your mind and won’t let go for a few hours at a time.

It’s ironic that an addictive pastime like gaming, which for many is just a hobby, might hold the key to real life progress. Yet applying this insight into our non-gaming lives can prove harder than we’d imagine. Whatever happens though, even if we only really use this knowledge to get more out of the games we play, it could still help us in other areas of our lives. 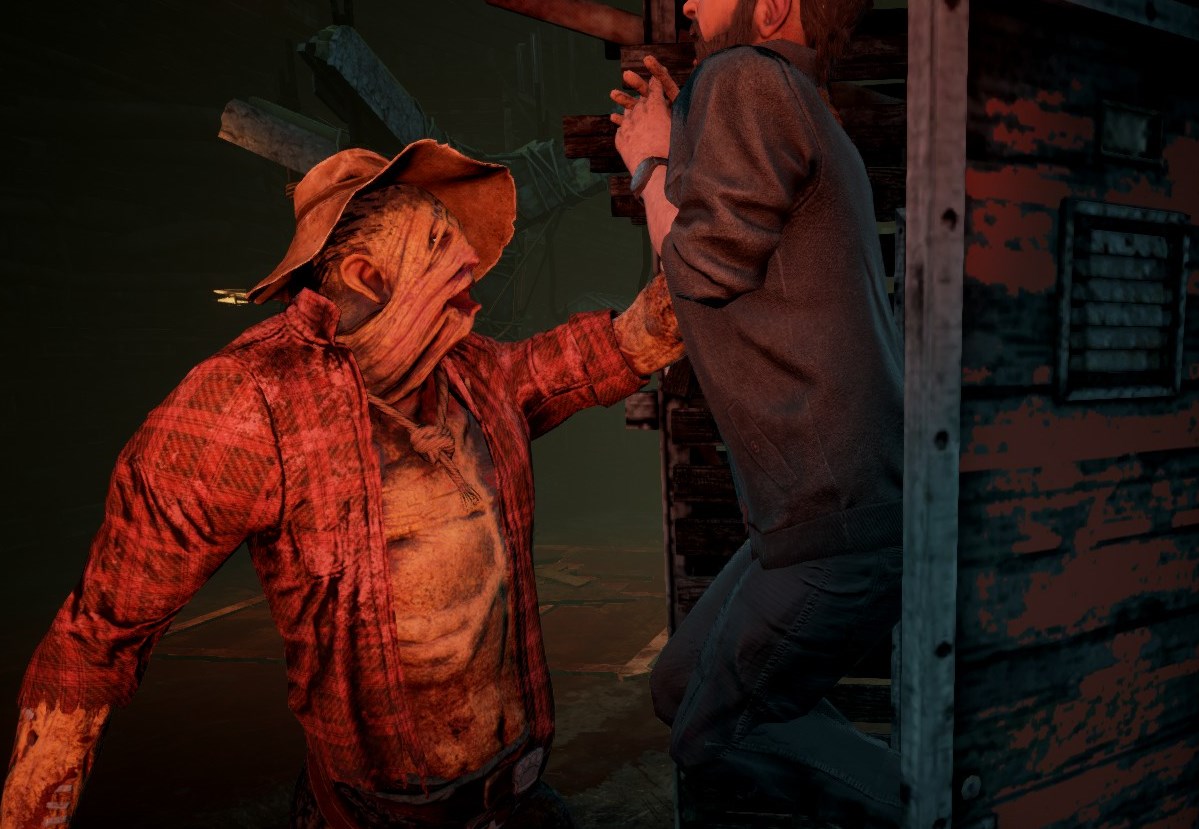 If you can enjoy a play-session on your game of choice, whatever the outcome, rather than get a bit tense and worked up, that’s bound to help your mood and disposition far more than the alternative. Who knows, maybe approaching our games in this way, we’ll one day find that this new outlook has bled into other parts of our lives quite naturally, finding ourselves gaining that same flexibility and fun in tasks and actions that before, really ground us down. Either way, I know how I’d rather play my games from here on in, and for now, that’s good enough for me.