The premise of Stardew Valley is simple: quit your desk job at the soulless Joja Corp., move to the beautiful coast, take up a simple life as a farmer.

Joja Corp. is the closest that Stardew gets to having an antagonist. Not only do they serve as a comparison for the idyllic life that the farmer takes up, they have a presence in the valley itself, threatening Pierre’s small store with underhanded tactics like handing out coupons for their products to customers on his shop floor.

You’re supposed to dislike Joja and their wealth accumulation. Yet the game’s actual mechanics run contrary. 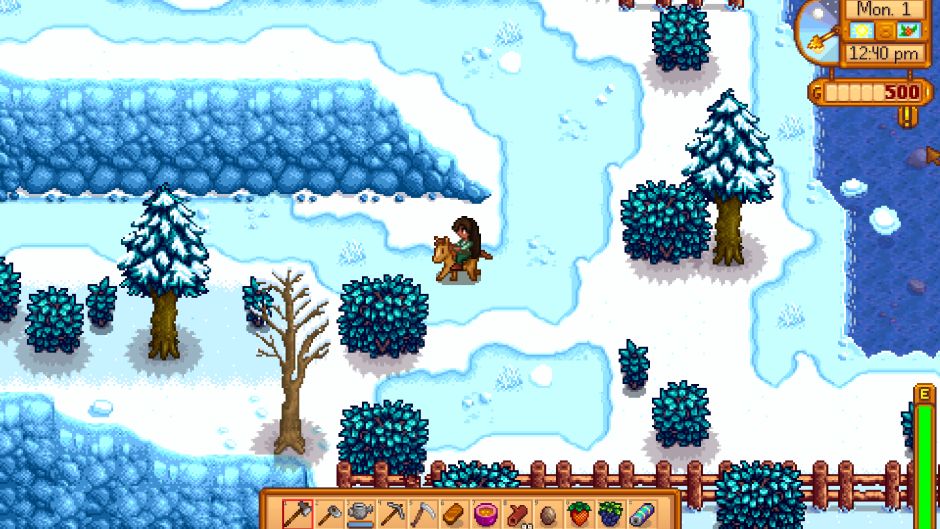 You start out with little but a run down plot of land, full of weeds and rocks, and a few parsnip seeds. You’re expected to grow those parsnips and then reinvest the money they generate into more seeds. It’s a straightforward mechanic that enables a satisfying progression towards a healthy farm.

But your farm can also grow into a mega-profitable empire, and there’s hardly anything to invest your money in that doesn’t generate more profit in turn. Buildings, animals, seeds, fertiliser; your farm becomes a machine with glittering cogs that creates more and more gold coins that you can go ahead and feed straight back in.

There are a few things you can buy that aren’t directly for your farm. Hats. Decorations. A larger and larger house for you to live in, perhaps with one of the other villagers and a couple of kids.

Pam and Penny live in a one bedroom (and one bed) trailer. It’s just north of Mayor Lewis’s place, which is described as a “manor.” Linus doesn’t even have a house, just a tent pitched high on the ridge above the village itself. One of the earliest interactions in the game shows him rummaging through the bins, trying to find edible food.

In my PC save (nearing 100 hours played), I’ve lived in the valley for three and a half years and I’ve made a total of one million “G”. 500,000G of that is just sitting in my pockets. A pizza costs 600G. I could feed Linus three meals a day for a year, except that the game only lets me give him two gifts per week. 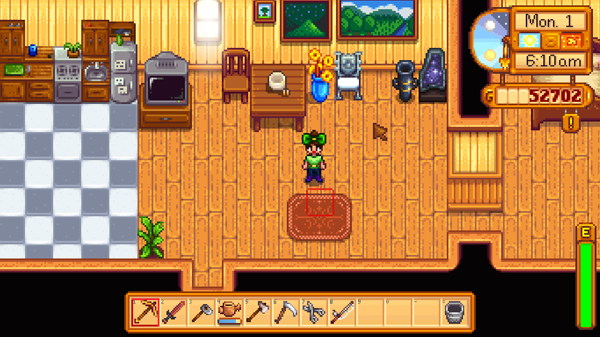 What if I could section up my too large farm and build Linus, and Pam and Penny, their own houses? Their own land and seeds, too. If you marry Shane, his mental health is radically helped by owning and caring for chickens – I want to be able to do that for him as a friend. In fact, money would solve or at least east most of the villagers’ problems. But the option to help any of these folks just isn’t there.

It feels deeply troubling to become filthy rich in such a positive game about escaping capitalism and forming relationships with people. Inequality is alive and well in the valley, and I’m the villain.