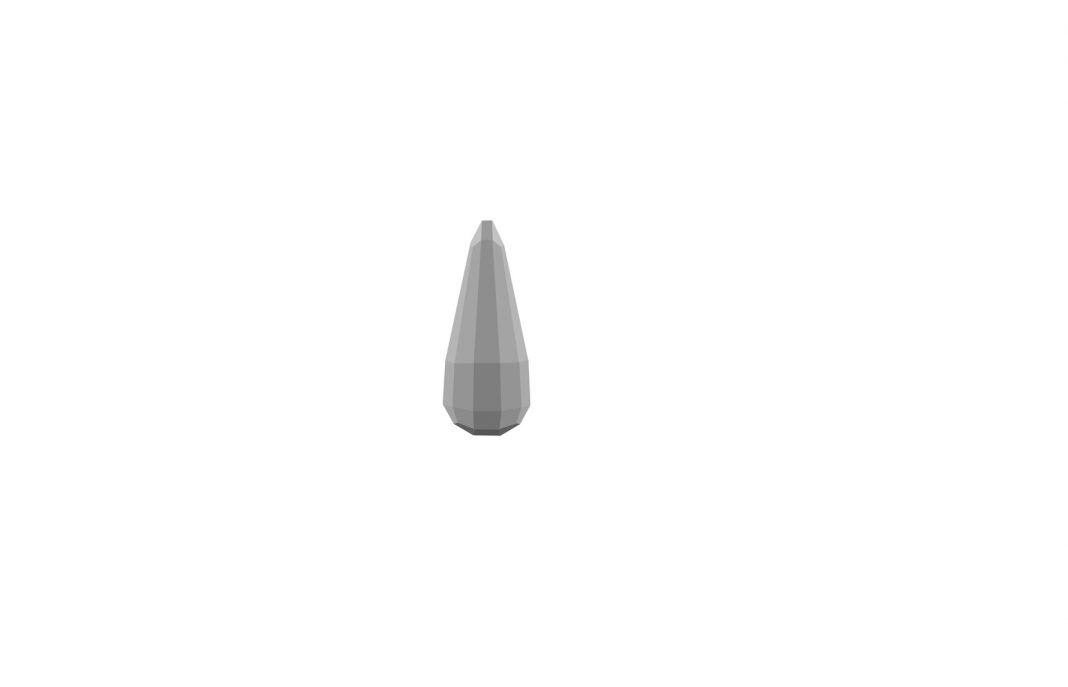 Since their arrival on the indie scene in the summer of 2015, Australian developer, Colestia, has released a dozen short, free games to their Itch.io page.

Sediment, a floating-and-digging sim with a pounding, leftist heart, debuted last week. We liked it quite a bit. So much so, in fact, that we decided to take a look back through the entirety of Colestia’s catalog.

While a few of their other games have the same low-poly, first person aesthetic as Sediment, there are quite a few that don’t. Expect puzzle games, management sims and interactive fiction. Just don’t expect them to keep their politics out of your games. 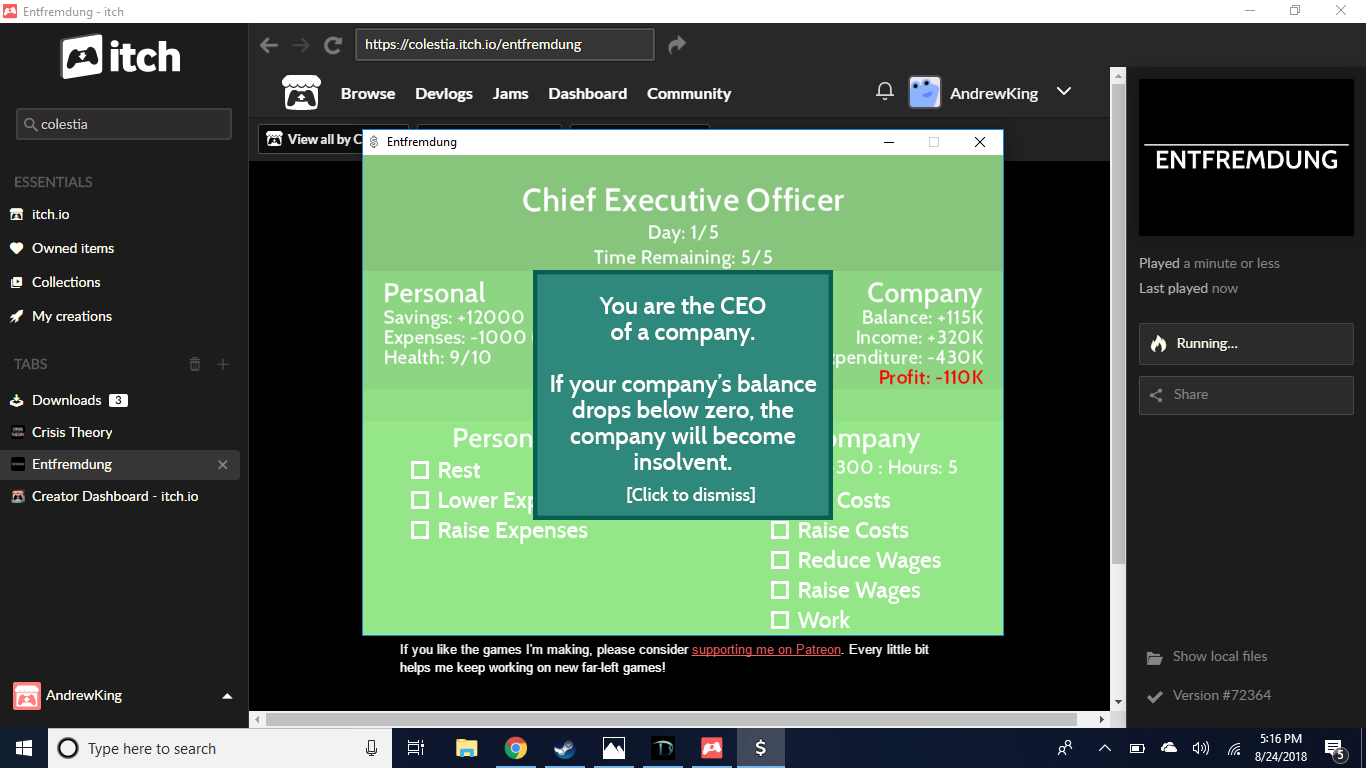 Colestia’s first game, which they describe as a “Marxist management sim,” is Entfremdung, which casts the player as the CEO of a company. As cheery (but sometimes discordant) swing music plays, you are tasked with keeping your company in the black.

But, no matter what you do, you’ll be insolvent within the five allotted days. As this happens, player control trickles down from CEO to worker. No one can keep the company afloat.

The game’s name comes from the German word for estrangement and refers to Marx’s theory of alienation; that living in a classed society leads to people being alienated from their humanity. Is it encouraging, then, that no one, of any class, can keep this business up-and-running? 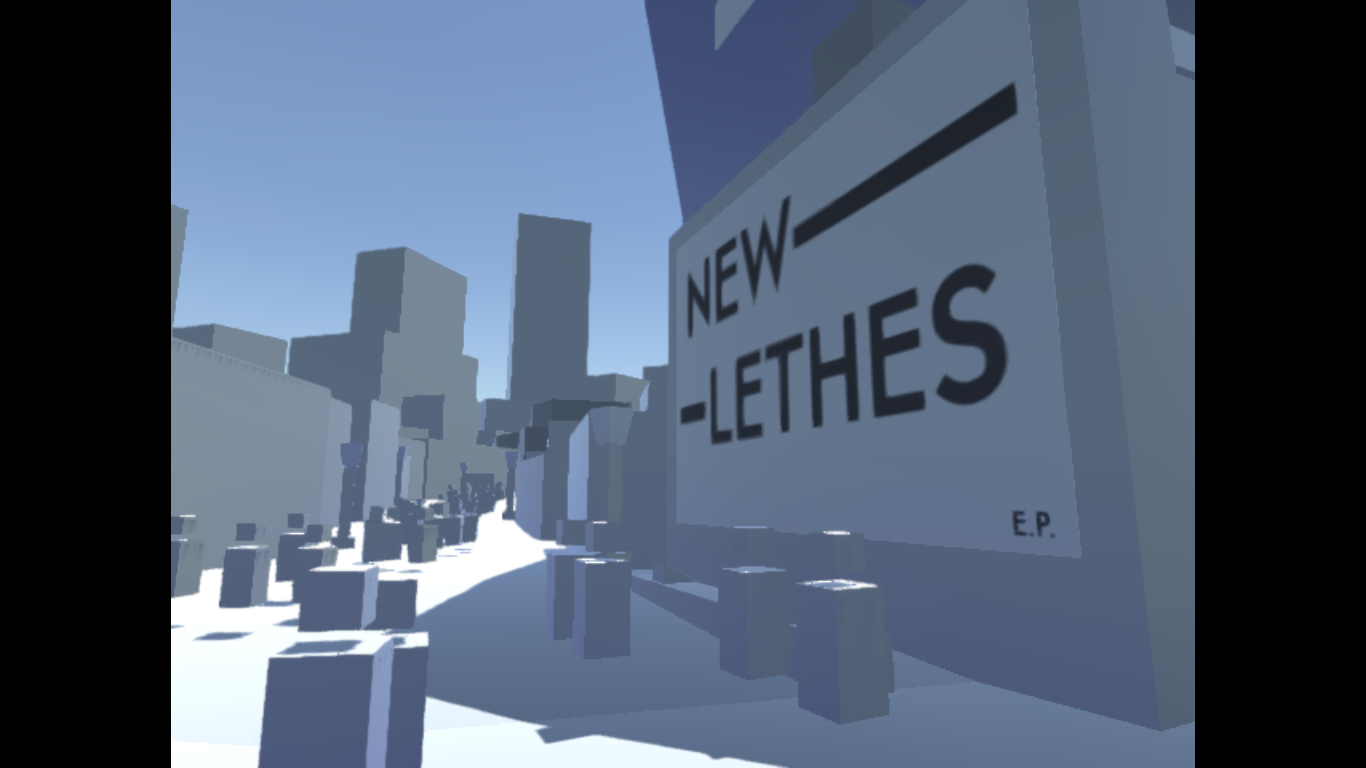 Not much happens in New Lethes, the gray-on-gray city that serves as setting for Colestia’s second game. You’ll explore a gray city populated by gray citizens. A synthy, calming soundtrack will begin to play when you approach a gray, seed-shaped statue off the main thoroughfare but that’s as climactic as this game’s action gets. (That statue is Colestia’s avatar and Twitter and Itch.io).

New Lethes is based on the theory of the Situationists, a group of European intellectuals theorizing from the 1950s to the 1970s. I know very little about the Situationists and maybe the game would mean more to me if I did. But as it stands, this plays very much like what it is: Colestia’s first published venture into 3D modeling and design. 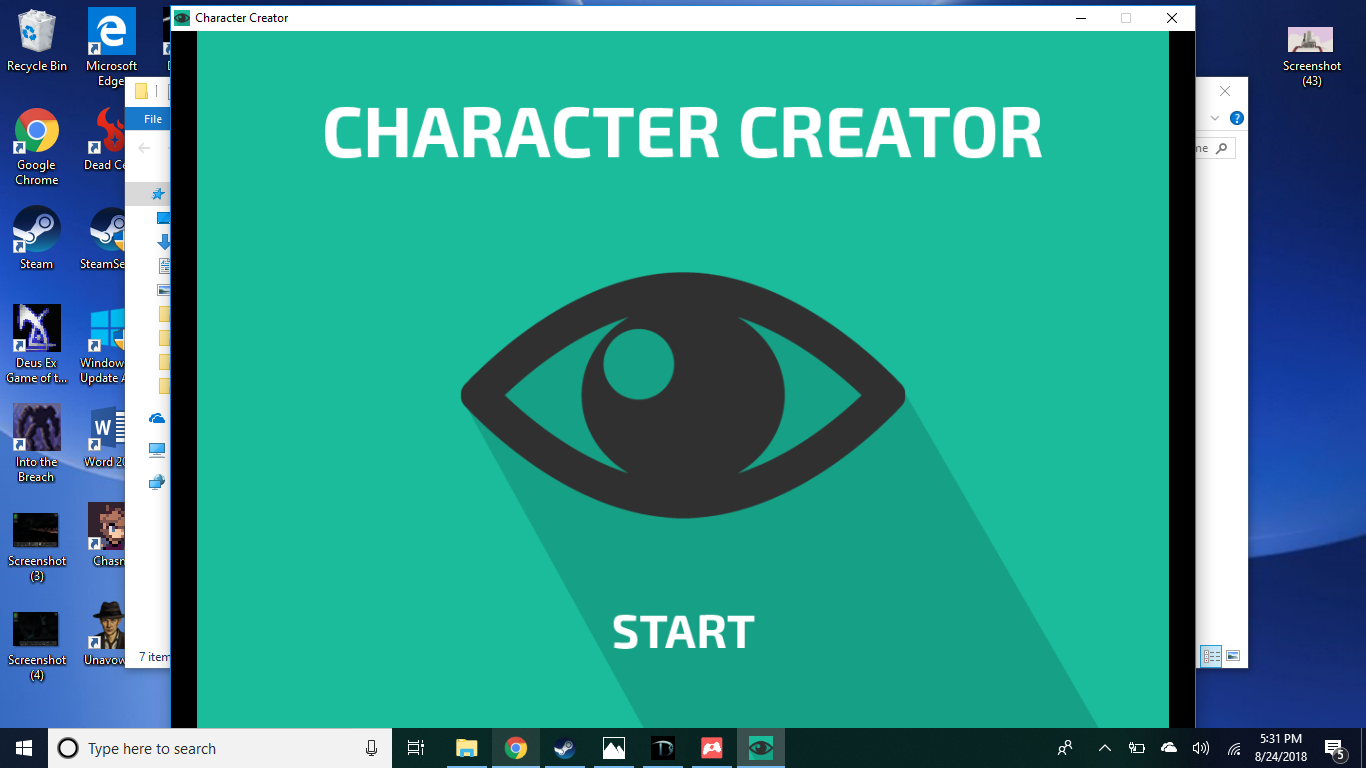 Character Creator will make you feel tremendously creepy if you follow its rules.

Each play session randomly generates a person’s first and last name and their city of residence and tasks you with using the Internet (the real Internet, not an in-game stand-in) to find information on that person. The more information you uncover, the better your rank. 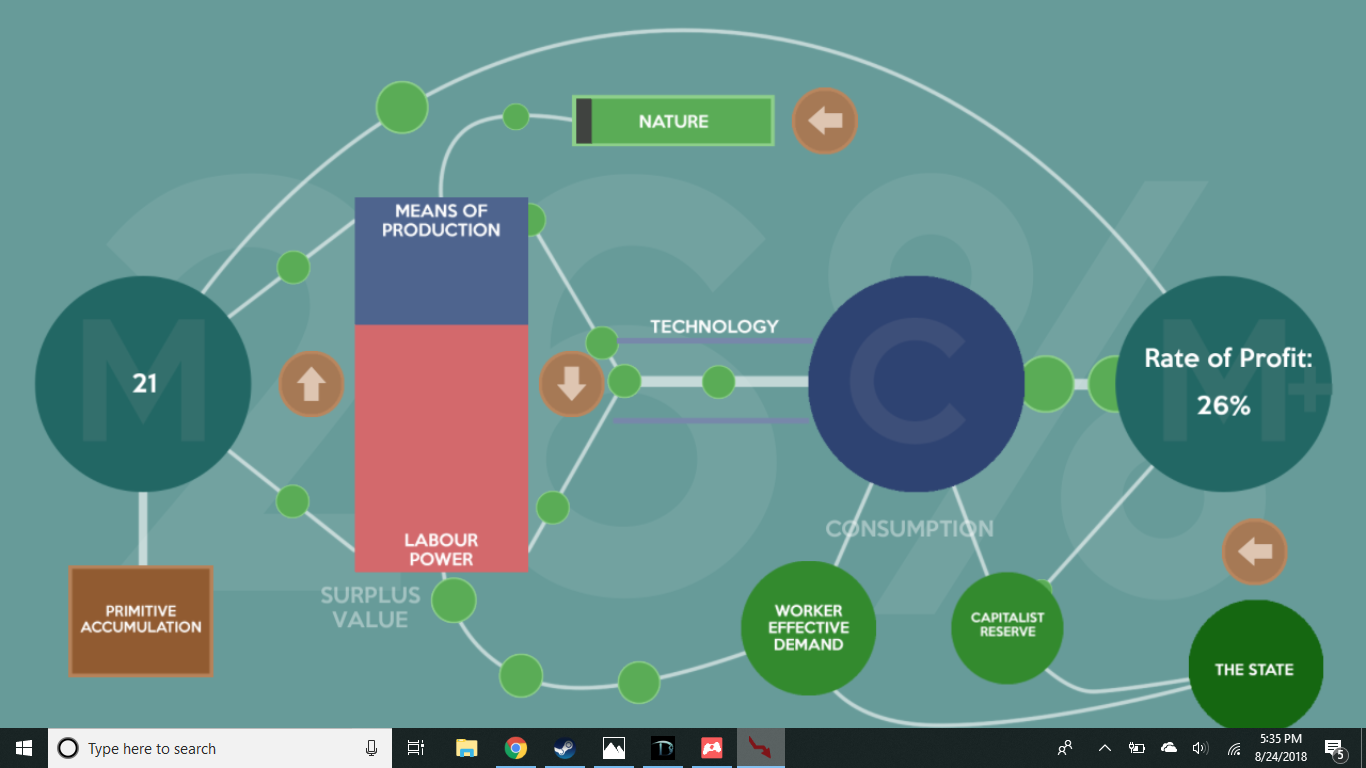 In Crisis Theory, you are the medium, channeling the Spirit of Capitalism to manage meters in a portrait of the economic system, based on the Marxist model of accumulation.

As the pressure mounts, and meters like natural resources, means of production and labour power demand your frantic attention, Edward Grieg’s “In the Hall of the Mountain King” reaches its frenetic, cymbal-studded crescendo. Upon inevitable (?) failure, you will be informed that capitalism has reached a crisis point. The time may be ripe for revolutionary change. 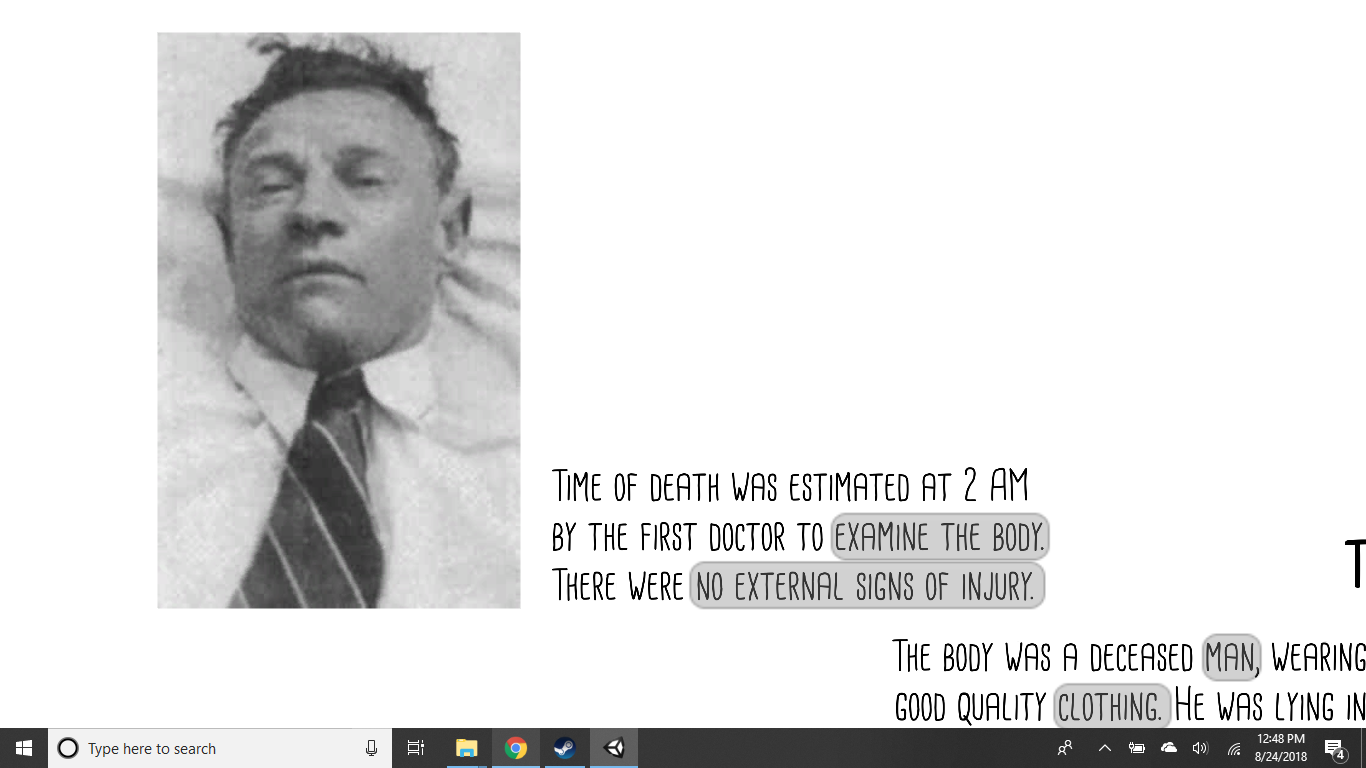 The Somerton Man is the Pepe Silvia scene from It’s Always Sunny in Philidelphia — but in game form, a fascinating and sprawling retelling of the story of a well-dressed man who washed up on the titular beach in Adelaide, Australia. With a stylish, black-and-white, ink-on-paper aesthetic, The Somerton Man is one of the strongest games in Colestia’s catalog (and one of the few that doesn’t wear its politics on its sleeve). 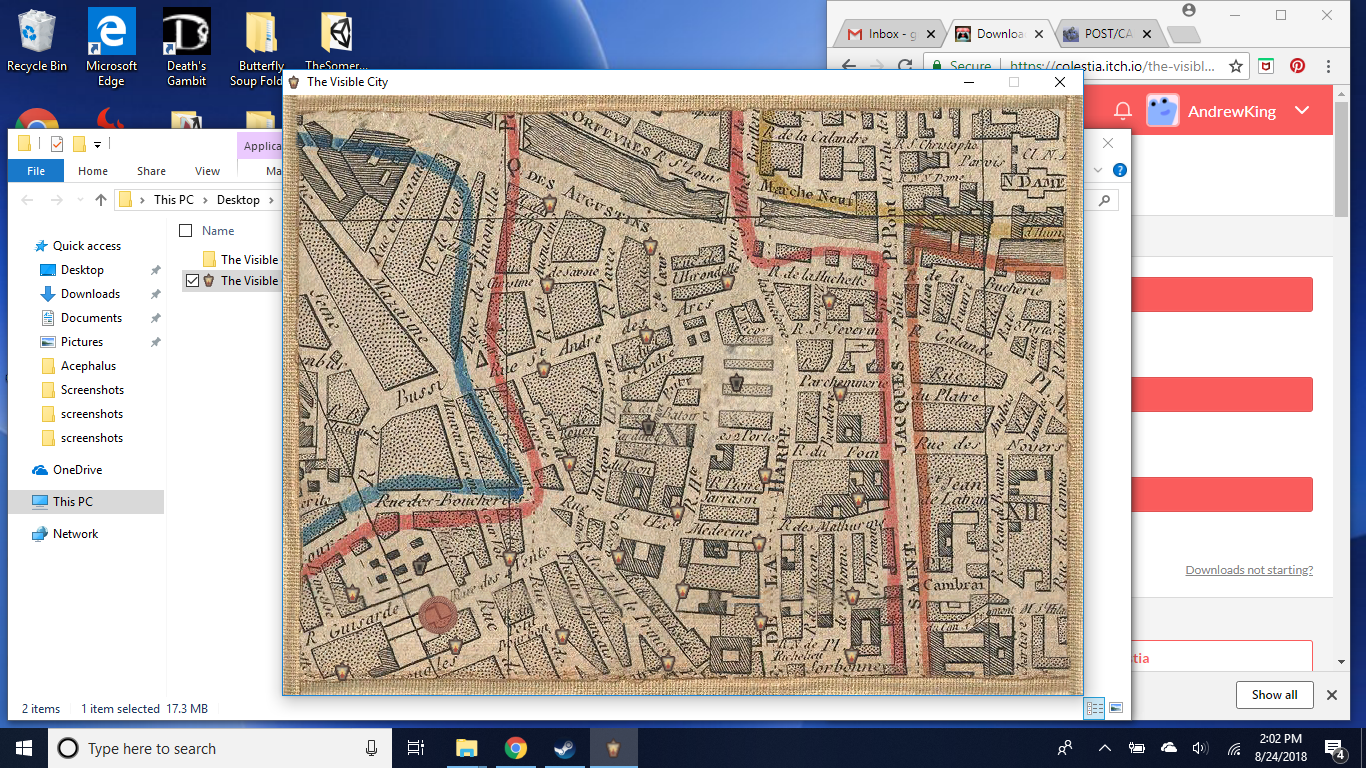 Made for the Ludum Dare 39 game jam, The Visible City pits technicians and police officers against revolutionaries breaking streetlights in Paris. As the lamps break, the city is plunged into darkness. It’s your goal to stave off a blackout. 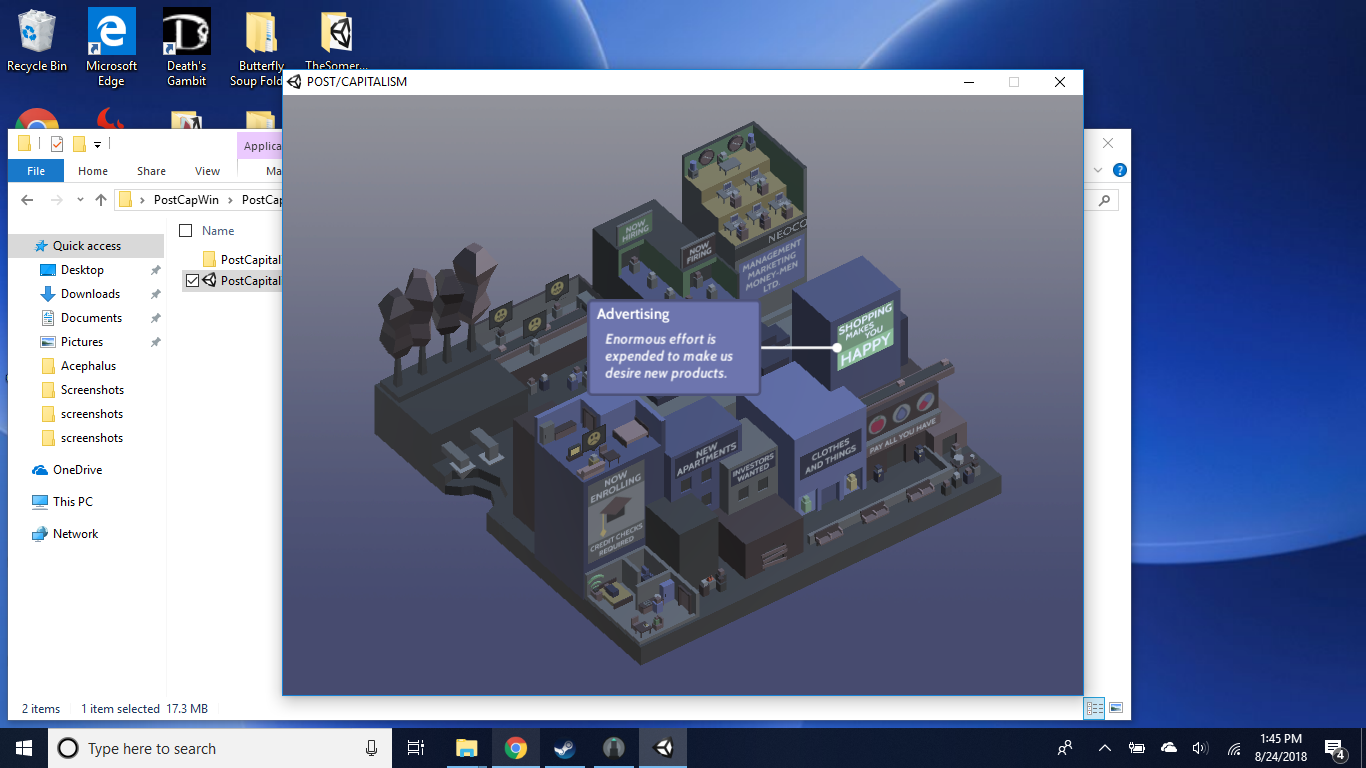 An improvement on Colestia’s earlier sims, POST/CAPITALIST tasks you with transforming a city into a post-capitalist utopia. At first glance, it seems like an impossible task; improved elements revert to capitalism when you tamper with other things. But, the game’s presentation of utopia being difficult, but possible, to achieve, seems like be a cautiously optimistic assessment on Colestia’s part.

A Night in Nowhere 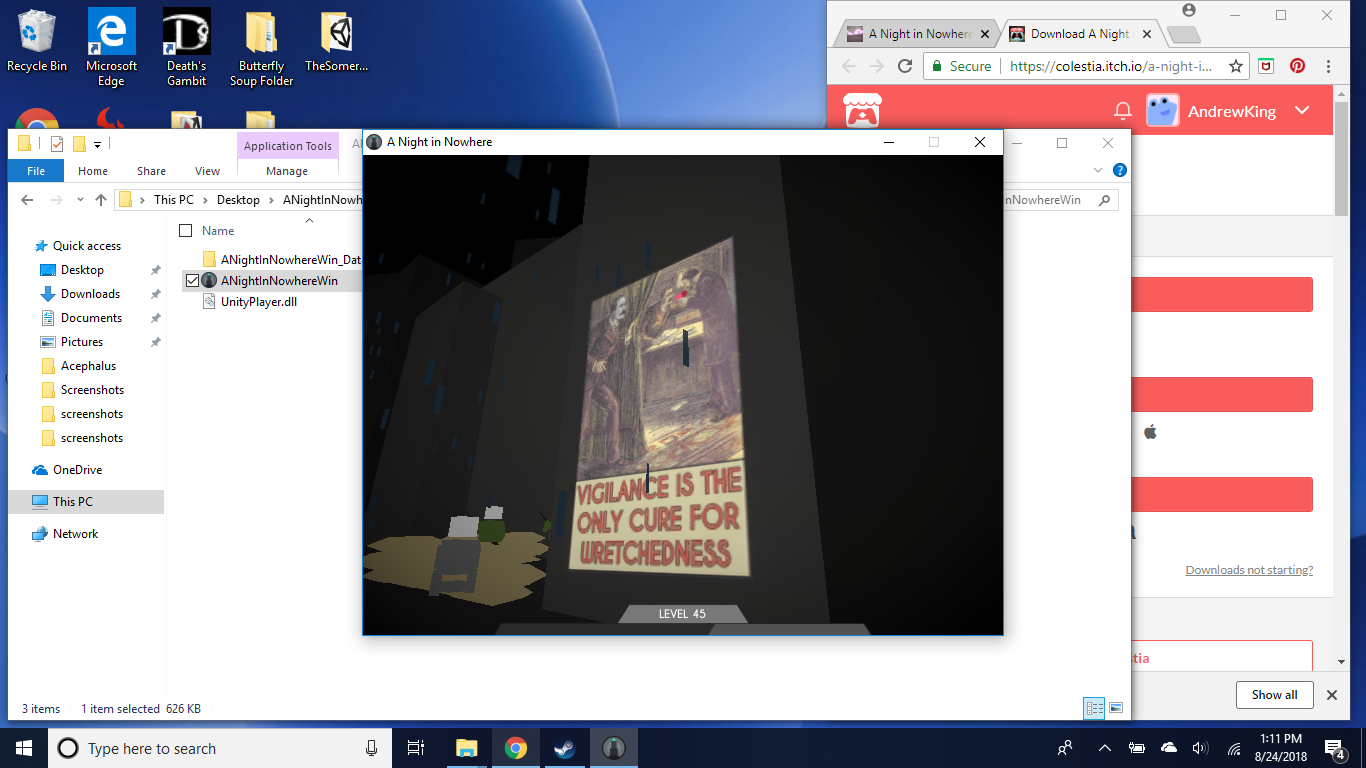 A walking simulator built on the foundations of Colestia’s earlier work in New Lethes, A Night in Nowhere is set in a moody city, where voxel-ly blue rain falls from the sky.

In the Itch.io description, Colestia acknowledges that this one is a little rougher than they would like. And it’s true that it isn’t as polished as some of their other games. But, what it lacks in polish, mechanics, or a discernible goal, it makes up for in mood. Nowhere’s cityscape is neo-noir with flares of an earlier era: 1890s style posters decorate many of the city’s low-res, blocky buildings. 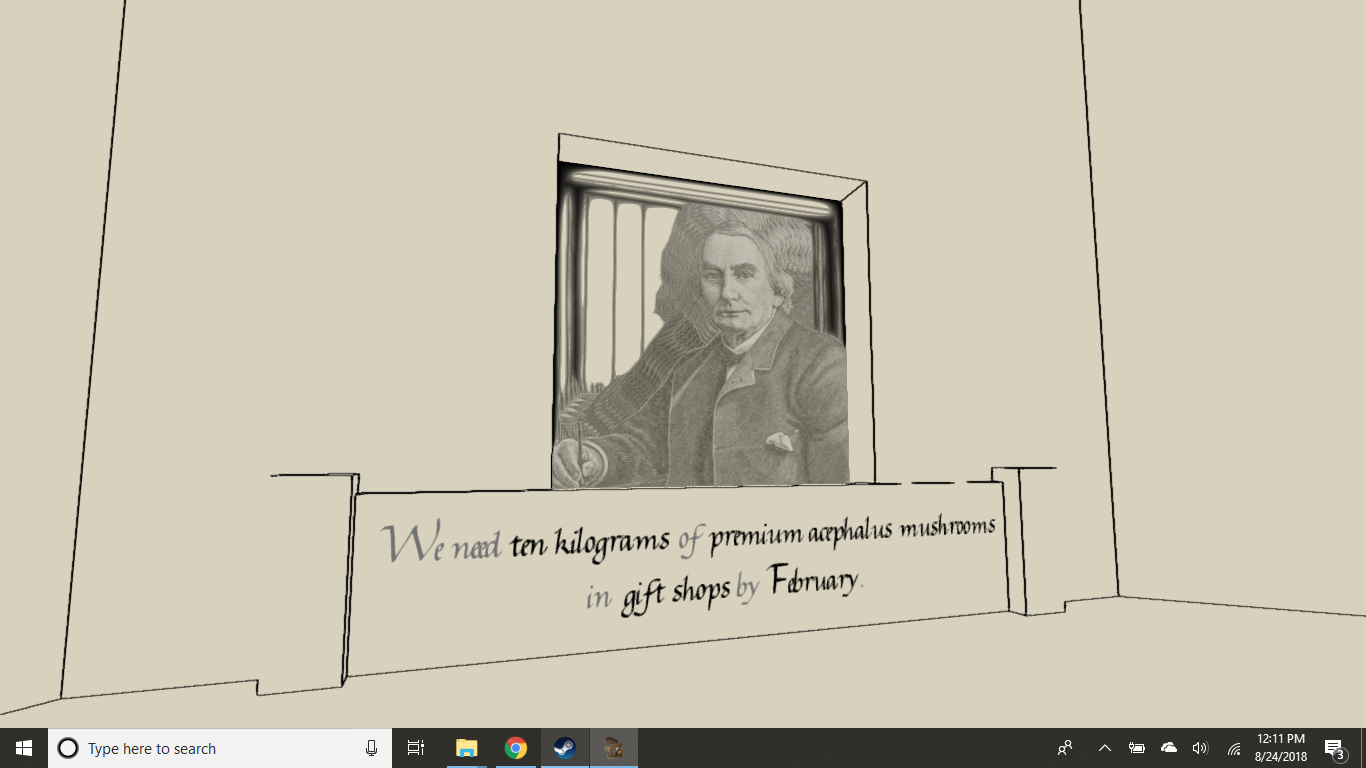 The only puzzle game in Colestia’s oeuvre invites you into a meditative state with its reverberating soundtrack, and tasks you with lining up octagonal objects which travel along circular paths.

The gameplay is simple, but the art is intriguing. Acephalus is caught in an interesting middle ground; somewhere between vector graphics and MC Escher. 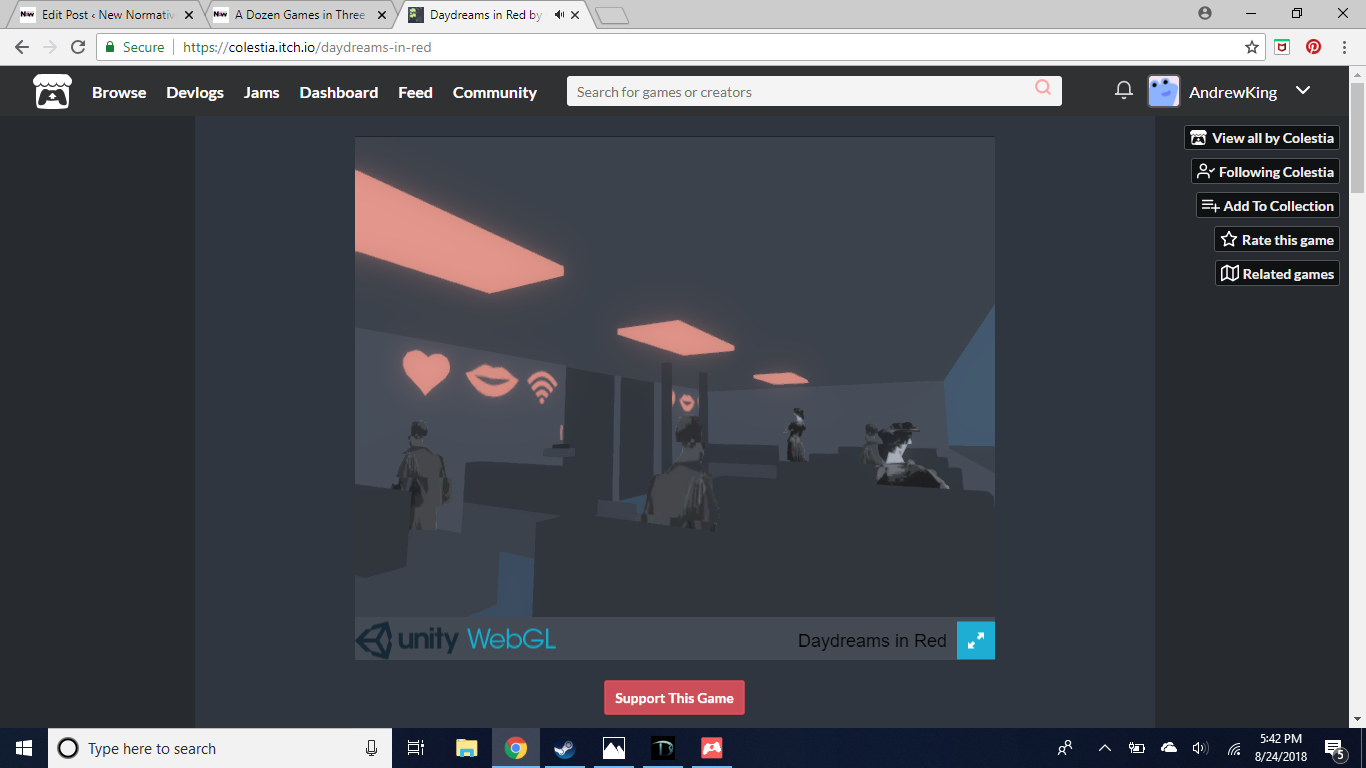 Daydreams in Red feels more like a music video shot in 360 degrees—and scored with The National’s “Carin at the Liquor Store”— than a walking simulator.

The setting of the song-length game alternates between a bedroom and an office building with hover cars flying past outside. It may feel like a proof of concept, but that concept is engaging: Colestia has created a playable music video. 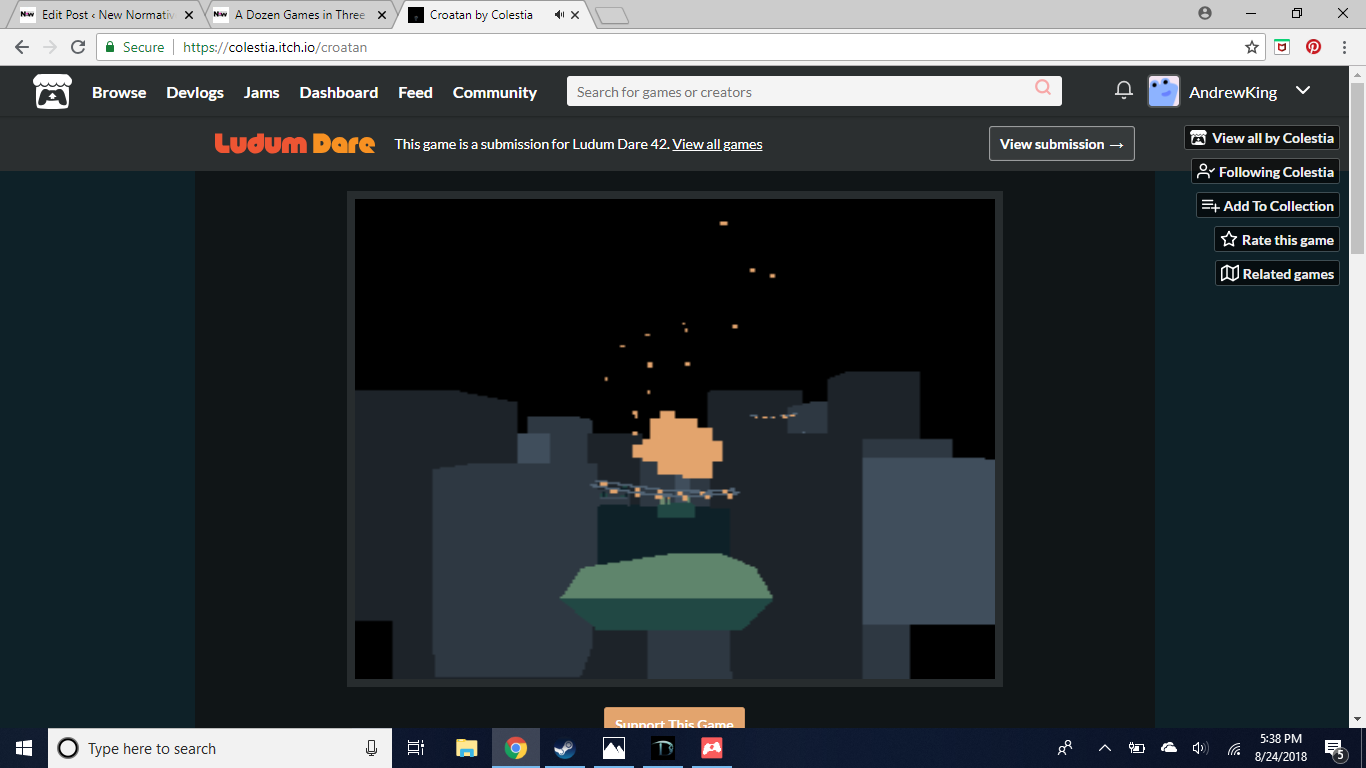 A brief but arresting work which Colestia made as part of the most recent Ludum Dare game jam. Croatan takes the player to the last place in the universe where capitalism doesn’t reign, the titular space station. There you’ll meet a group of expats who have fled from capitalism (some for that express purpose; some have their own reasons) as an armada ship approaches to conquer them.

Croatan suffers from being preachy in a way that Colestia’s other games rarely are. However, what’s here is engaging. Croatan would be well-served by a longer, bigger version with more than 72 hours of production time.

That’s all of them! For now. However, Colestia puts out numerous games each year, so check their Itch.io page if you’re interested in seeing what they do next. If you like what you see be sure to take a look at their Patreon.