Once upon a time, there was a convention by the name of GaymerX which came to life via Kickstarter. After some disagreements over naming a LGBTQ convention “Gaymer” specifically, it became known as GX instead – though is still regularly called GaymerX by many. GX2 was the first one I attended. I fell in love with the event immediately and knew that visiting next year’s event was a necessity. I’ve been to dozens of different video game-focused conventions over the years, but none have ever felt as welcoming. I made good on my personal promise to attend GX3, despite the fact that it conflicted directly with a final exam in a tough course. Again, it exceeded my expectations with a much expanded size and dozens more great panels. It’s safe to say that I was excited for GX4.

GX4 proved an interesting convention for many reasons. The biggest of which might just be the fact that it felt smaller when compared to GX3. Despite a full booking of panels, very few stood out to me personally this time around. Even though there was an expo hall, it only featured a slim selection of folks selling their wares. Instead, booths for Intel, GitHub, LinkedIn and others took up space and seemed best for people looking to network. Despite the oddness, it was actually an ingenious move on GX’s part. With these companies present on the show floor, it may have given some tech-minded attendees an opportunity to get their foot in the door at a huge company. For those non-tech savvy gamers, though, it may have felt much too focused on one career field. 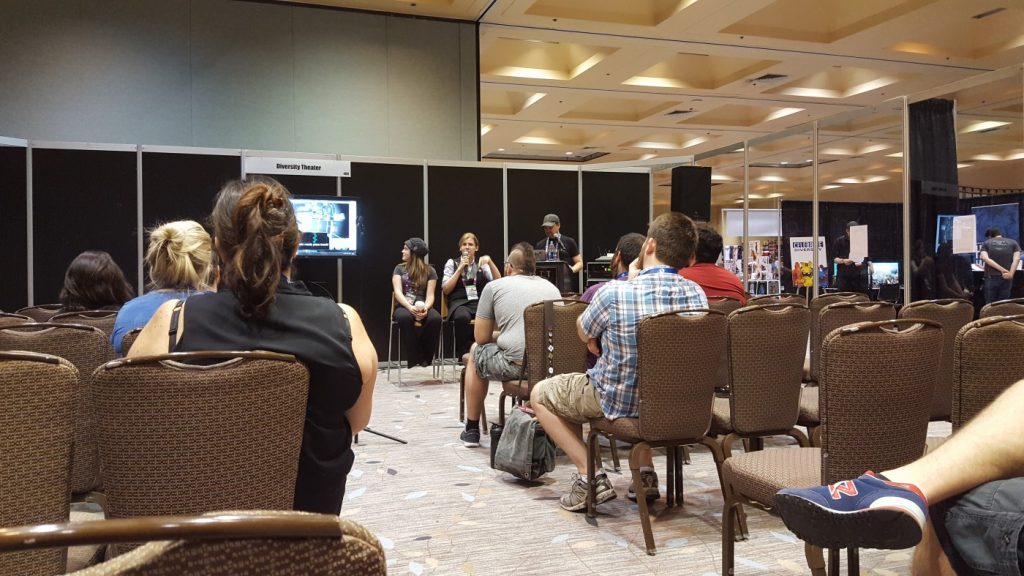 Most of the panel rooms also felt a little squashed. One room in particular might as well have been a tiny classroom with just twenty or so seats. Fortunately, the panel I did attend in this room had a small audience to begin with. In the end, it felt cozy more than cramped. Other odd moves included putting the Diversity Theater in the middle of the expo hall. Bordered by clear plastic walls, this meant anyone walking through the hall could stare into this makeshift room and the panel attendees could also gaze back out. Just looking at it made me feel a little anxious about sitting in on a panel there. Panel times also occasionally appeared off, meaning a panel was listed as later than it actually occurred. The official convention booklet failed to even mention events beyond the primary theater, meaning I had to keep looking at Sched to know what else was going on. By the time I figured this out I had already missed a few intriguing panels on Friday.

In some sense it feels that GX4 was rushed, or that there was simply less people able to put in the time required to make it an A+ event. Even so, it has never been all the “typical” convention stuff that made GaymerX great. The greatest asset of this event is the people themselves. As with every year, attendees have proven to be some of the kindest folks in gaming, and the most diverse group you’re ever likely to see at a gaming event. Wherever I walked, there were folks smiling and having a great time with one another or on their own. Conversations bloomed readily and I’m absolutely certain some people made new friends thanks to the event. There is something really powerful at being at a convention and not feeling like an outlier. It is the feeling I noticed first at GX2 and which persists through each year. There is no need to hide – I can let go and be myself without fear of judgement. 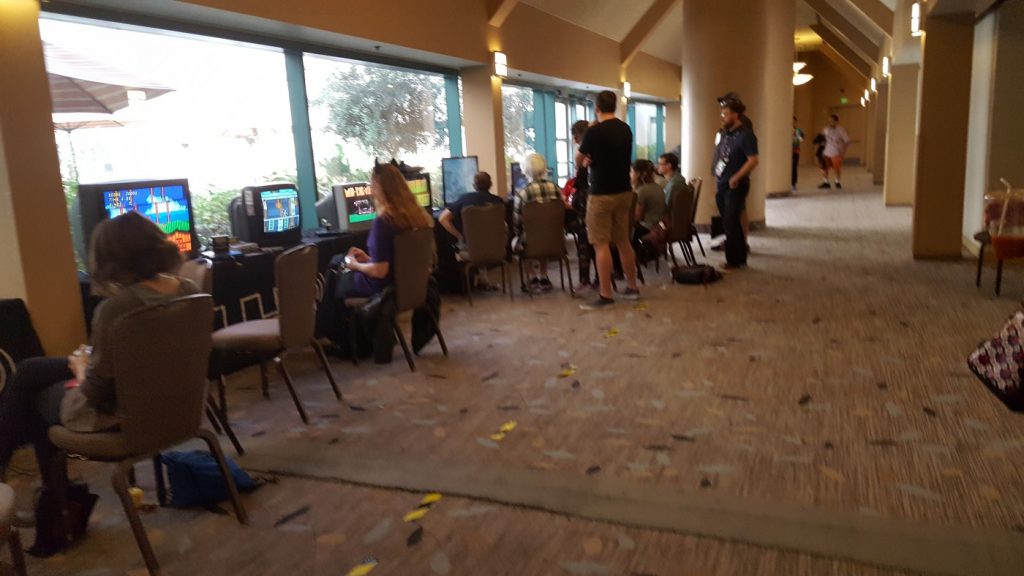 This brings up one extremely strange part of GX4. The last day of the convention was Sunday, October 2. For those non-sports fans out there, this happened to be the same day as a massive football event which was literally across the street from the Hyatt Regency Santa Clara. As such, tons of fans were checking into the hotel as many GX4 attendees were leaving. Ignoring the ridiculous traffic this caused, it brought about another, less than ideal dynamic to the event. That feeling of being free while walking around the hotel from Friday and Saturday was suddenly extinguished for me. It’s not as if this sports crowd wronged me in any way, though unfortunately there was a slight verbal altercation between a drunken sports fan and convention attendee. Although fortunately not a larger incident, this definitely soured an otherwise amazingly inclusive time for some attendees.

There is not really anything the staff of GX4 could have done. After all, they planned this convention location and signed their deals months ago. It would have been impossible to know that a huge game would end up happening right at that stadium. Both convention staff and hotel staff made sure to also provide spaces exclusively for GX4 attendees. For example, the entire board gaming section was off limits, as was the arcade provided by Magfest. Still, seeing a handful of sports folks looking at certain GX4 attendees in ways that did not seem supportive was enough to stress me out. Well, what can you do? The convention goers made the best of it. Whenever the sports fans cheered for a goal, some GX4 folks let out a “yaaaaaas” cheer. All in all, it appears both groups took things in stride. 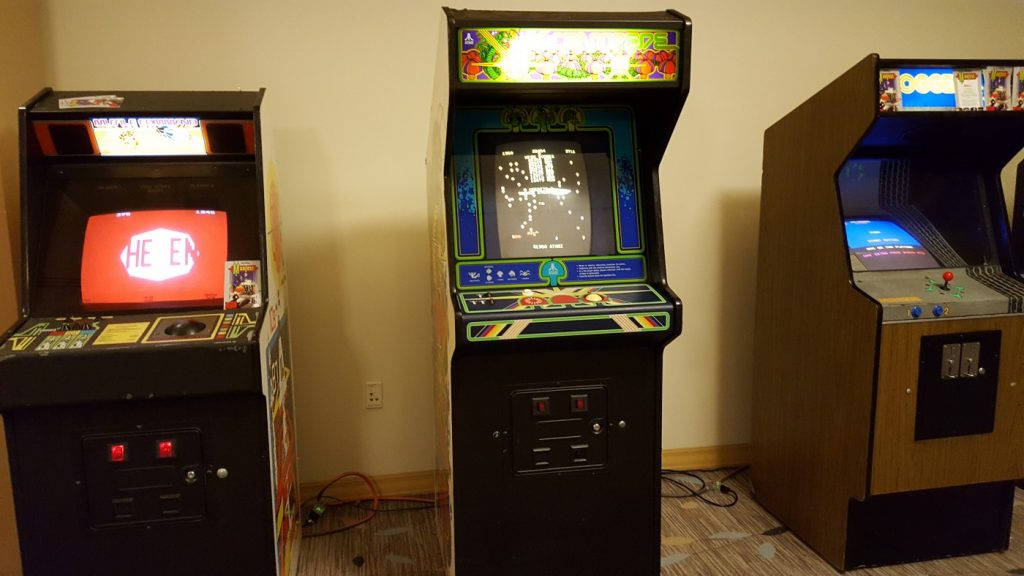 GX proves to be a worthy visit each year, but there is still more that can be done. Instead of growing, it appears to have stagnated with concepts that work rather than attempting to branch out further. GX East may be the first sign of attempted growth, or it may end up replicating what has already worked on the west coast. I would love to see more platforms for minority voices at panels. Many of the speakers this year felt “famous” to me in some sense, such as those who hailed from big-name sites or have large Twitter followings. Yes, they absolutely deserve a platform as well, but there is room for even more people to get their stories out there. This is the only gaming convention out there with a LGBTQ focus and I expect it to outperform other events. Not necessarily via scope, but in regards to heart.