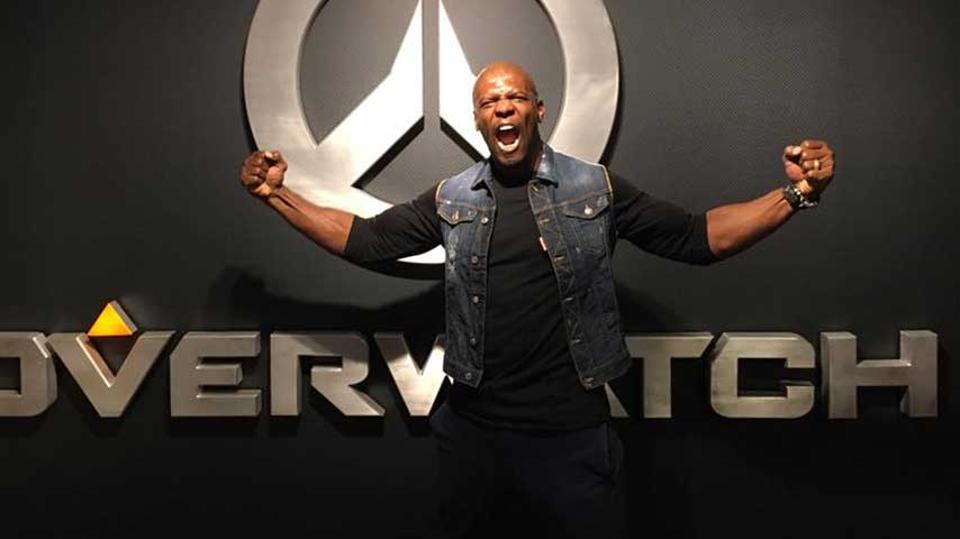 I know something is shaking up the gaming world when my mom calls me out of the blue.

“Hi honey, I was checking my e-mail and there is this man all over Bing who wants to be in the Overwatch.” Waitwut?

Now, I’d heard about this a week before my mom called me with her news. (Side bar: I didn’t reprehend my mom for using Bing and not Google, because she’s my mom.) I didn’t know who Terry Crews was aside from his time playing a badass in some Old Spice commercials. When I asked my husband what the hubbub was around Crews and Overwatch, he said that a smorgasbord of fans were campaigning for Crews to voice Doomfist.

You might remember Doomfist’s gauntlet in the Overwatch announcement trailer, where Tracer and Winston battle Reaper and Widowmaker for the gauntlet.

We don’t know a ton about who this Doomfist fellow is, but here’s what we do know: Doomfist is a nickname that’s been taken on by a couple people in the past – The Savior, The Scourge, and The Successor – all of whom have banners at the Numbani Heritage Museum in Overwatch. I think of Doomfist like The Doctor (with different incarnations, or in this case different people taking on the name) who has the One Ring (which in this case, is a super powerful gauntlet).

The other clue that we have is about the gauntlet. If you examine the banners in the Numbani Heritage Museum, you’ll see that each gauntlet gets progressively more badass; The Savior has a small fist-weapon sized gauntlet; The Scourge has a more advance version that reaches his elbow; Finally, The Successor’s gauntlet is so evolved that it seems like an entire bionic arm of awesome destructibility and chaos.

Now that we’ve got “Who’s this Doomfist dude?” out of the way, we can delve into Terry Crews and why everyone and their mom (namely mine) is wanting this guy to voice the thusly unforeseen Big Bad in Overwatch.

Like a lot of internet to-dos, this story’s humble beginnings go back to SleepyRick on Reddit. A fan of Crews had watched a YouTube video by Jaytwocent where Crews got some help building a custom gaming rig. It was here when Crews first expressed his desire to be in a video game. SleepyRick posted his enthusiasm of how awesome it would be if Terry Crews voiced Doomfist in Overwatch.

Thus, the idea was born. And the internet was all over it. So was Terry Crews. A few days later, Crews himself responded to the reddit thread, saying that he’d totes voice Doomfist if given the chance.

To get an idea of what Terry Crews in Overwatch would be like, check out this fan made video by Harute.

This dude is testosteronic adrenalin incarnate. He oozes power. He needs to voice Doomfist.

What’s unique about this situation is how it is bringing the entire Overwatch gaming community together. Everyone and their mom is on board with Terry Crews voicing Doomfist. This rallying together is a far cry from what we normally hear when it comes to player vs. player games – “noobs need to GTFO,” “this character needs to be nerfed,” etc.

Who wants to hear me do the voice of Doomfist for real?? https://t.co/l4aszRrDYE

He’s been teasing fans for weeks, asking them if they want to see him voice Doomfist. He was even seen at the Blizzard Entertainment campus, making fans freak out even more. It seems that the likelihood of Crews voicing Doomfist is closer than ever. I for one, am totally and unequivocally on board with this. Who’d have thunk the potential voice of an evil mastermind could bring a gaming community together?