Home Read Fighting The Stigma of Depression and Anxiety With Games 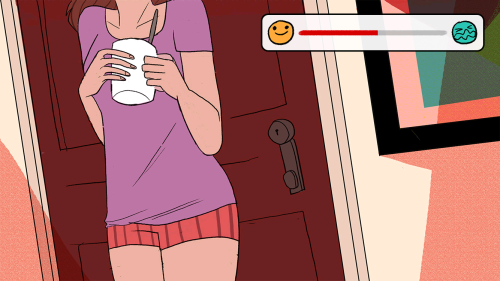 Though approximately one in four people will experience a mental health issue in their lifetime, there is still far too much stigma and misunderstanding surrounding them. By creating games about depression and anxiety, two of the most common mental illnesses, developers have been demonstrating openly their own experiences in a way that helps both sufferers and neurotypical folks alike.

Though depression and anxiety are two of the most well known mental health problems, less stigmatised than some other conditions, they remain difficult to talk about. Games can therefore be a powerful tool for helping those with depression and anxiety to feel seen and validated. Moreover, they can also be useful demonstrations for those who don’t know what living with these illnesses is like.

Case in point is The Average Everyday Adventures of Samantha Browne, available on itch.io and Steam. The game deals with the messy, ugly reality of social anxiety, demonstrating the stark differences between anxiety disorders and the general worry that everyone experiences to some degree. Though some describe Samantha as unlikable, she is deeply relatable to me, reflecting my own experiences with uncanny resemblance.

Not everyone will experience anxiety in the same way, of course, but for those who are willing to learn, Samantha Browne is a demonstration of one way that it can manifest that goes beyond what any straightforward explanation would achieve. By putting the player in Samantha’s shoes, the game demonstrates just how difficult everyday tasks – in this case making oatmeal – can be.

And Samantha is not a model sufferer. Her paranoia makes her think unkind things about people who don’t actually deserve it; she doesn’t want to get dressed or leave her room; she has panic attacks and breakdowns. Wonderfully, she trashes the idea of a shy but ultimately likable woman who merely needs to come out of her shell. It’s so refreshing to see a game pull no punches about the parts of anxiety disorders that usually go unspoken. It can serve as both an unflinching education and a comforting reassurance that others feel the same, depending upon who is playing.

Rainy Day, available on itch.io, demonstrates much the same for sufferers of depression. Those who have struggled to get out of bed in the morning can find solace in the fact that they are not the only ones. Those who have not can learn just how difficult it can be for some people.

Both Samantha Browne and Rainy Day feature a number of different endings. These serve as excellent mechanical representations of various coping methods and their effects. A straightforward example of this can be found in another game, Stuck @ Home, available on itch.io, where a depressed teenager’s friends coax them out for a walk and a chat. The endings, based on whether you accept or refuse the invitation, are a simple but effective demonstration of how socialising can be one important way of combating these mental illnesses. This can be an important reminder both for those with depression and anxiety and for those who want to support them.

Yet socialising can also be a key anxiety trigger, as demonstrated by in.version, available on itch.io. It can be extremely difficult for any mentally ill person to manage energy levels, especially at a large party, and quiet time to recharge is important. However, it can be hard to find in places with so many people chatting at once. In.version demonstrates this elegantly with little more than blurred stick figures constantly spitting out small talk and a rapidly depleted health bar. Taken in conjunction with Stuck @ Home, it’s abundantly clear that every person’s health is different and there is no one size fits all solution – something we all need to keep in mind for the sake of not putting pressure on ourselves and others.

Games about depression and anxiety are a growing genre

These examples – The Average Everyday Adventures of Samantha Browne, Rainy Day, Stuck @ Home, and In.version – are only four of many such games about depression and anxiety. They address just some of the ways in which they can manifest and be dealt with. With so many different experiences and voices, creators are finding a wealth of ways to share, teach, and comfort; eroding stigma and encouraging a more open discussion of these common problems.