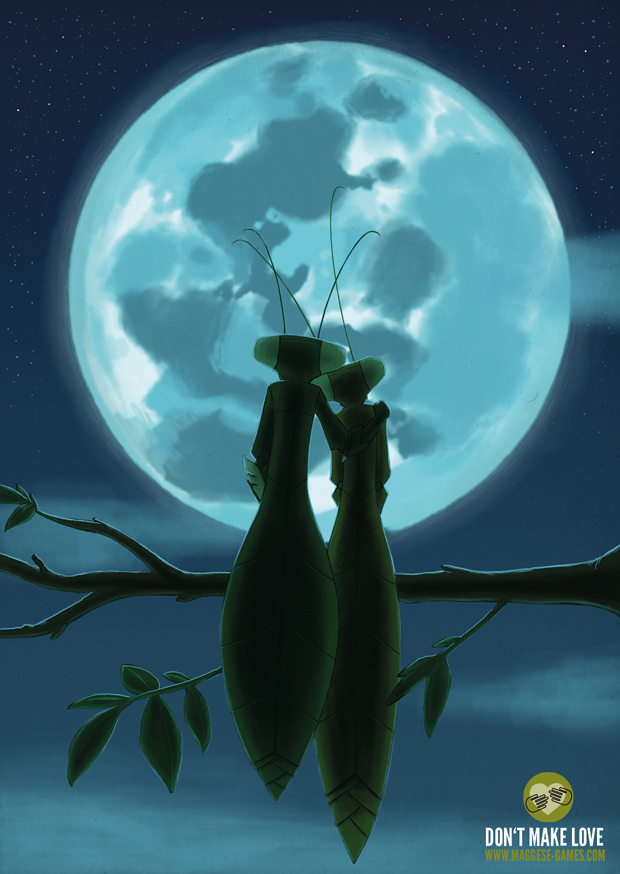 ‘At once victors and vanquished’ is a fairly unusual juxtaposition for a game. Often, you fulfil the conditions of a win state, get dragged along through the firework display of congratulatory cutscenes, cup your willing hands before you to receive the gold-hewn power star of definitive success. Tragedy is a peripheral concern like air and space in the face of concerns like circle and triangle – an abstract narrative motivation for haptic repetition, like getting a point every time you refresh a news article on natural disaster.  Even in the most dire of settings, the end credits mark a finality which rarely represents anything but success. The darkest night imaginable still fades behind a glowing constellation of five pointed torches that illuminate the path to 100% completion, each a testament to a challenge overcome. The victor is never the vanquished. The victor wins. The victor pwns. To the victor goes the spoilers. 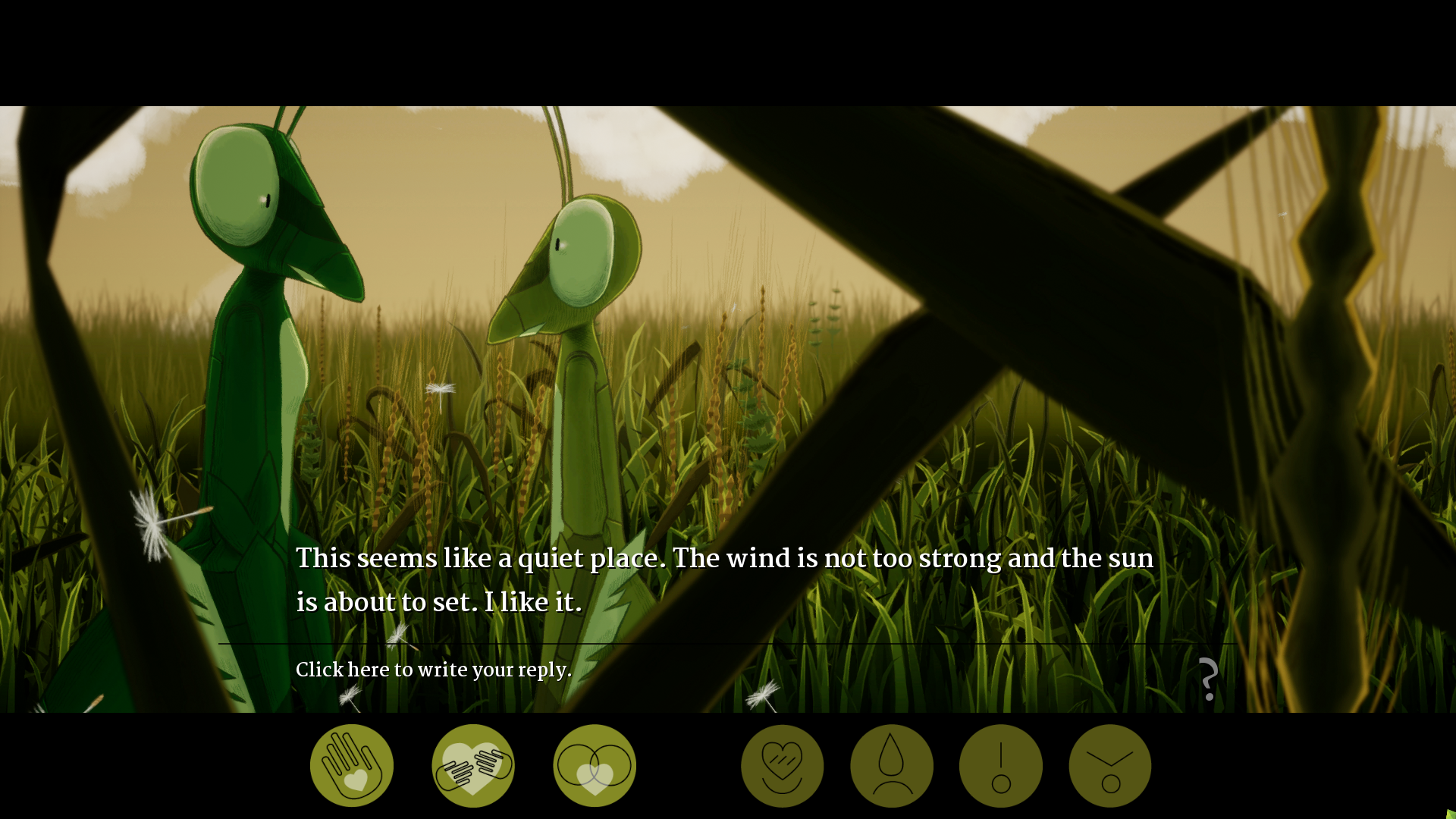 Maggese Games‘s Don’t Make Love puts you in the most beautiful situation imaginable, then lets you know that you’ve already lost. The ‘conflict between…freedom and an objective necessity’ here is the struggle between physical desire and self preservation. You take the role of either a female or male mantis attempting to settle an impossible dilemma through an emotionally wrought conversation concerning romance, social pressure, instinct, sex, and death. You can make a life together, or you can make love together, but not both.

At least, not without difficulty. Don’t Make Love isn’t interested in Mass Effect style dialogue wheels where easy compliments lead to guaranteed guilt-free lays.  By offering input possibilities limited only by your vocabulary, Maggese’s maudlin ro-mantis-em-up reframes player freedom –  that much sought accolade – as just all the more rope with which to hang yourself. Invisible walls and minimaps may be a stifling condescension, but trying to navigate another’s tempestuous soul as a one-mantis skeleton crew makes for a stormy voyage indeed.

This is, of course, providing you approach Don’t Make Love with the right mindset. It’s a charming proposal, to be sure. It’s characters are beautifully drawn, with just the right amount of earnest silliness to make you eager to inhabit the spiky bits of your chosen proustian predator. The wistful guitar music drifts through the pale light of the windy field in which these two lovers find themselves in heart rending ultimatum. Naturally, I couldn’t help myself fucking with it. One on playthrough, I decided to make all my answers about wizards. 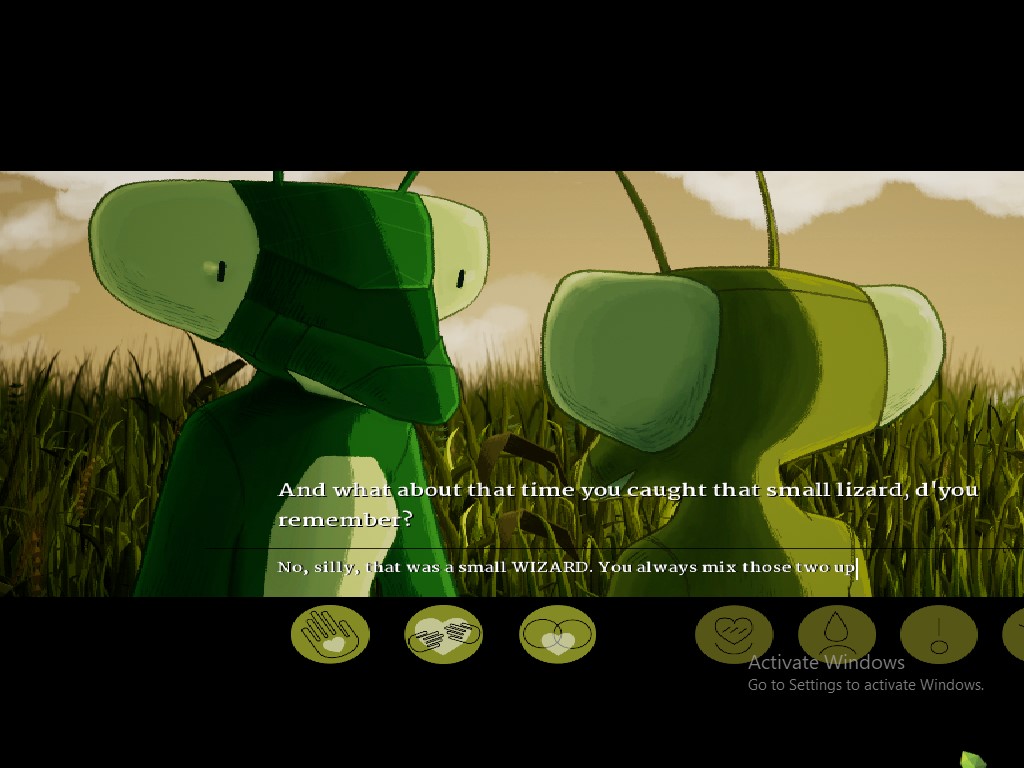 The strength of Don’t Make Love isn’t diminished by allowing for this sort of dickery. While the game never offers up anything resembling an easy victory, even during my most irreverent playthroughs, making my partner upset or isolated always felt like a loss. My natural instinct as a player is always to go right when the signposts point left. That the situation felt real enough for me to notice signposts to rebel against in something as freeform as conversation speaks to some exceptionally powerful writing at the core of the experience.

There’s a genuine humbleness to Don’t Make Love, like a spurned lover’s open willingness to listen to any suggestion that might save a hopeless relationship. It bears all the hallmarks of a more self-satisfied art game – the quirky yet earnest aesthetic, the experimental interface, the harrowing subject matter introduced by a literary quote – but seems intent on reaching an understanding through collaboration, rather than shouting down the player with an unwavering vision. It’s not always the perfect conversation partner – there are times where it seemed more interested in delivering a pre-determined outcome than reacting dynamically to what I had to say – but overall, like a new crush, it’s endearing enough to forgive these little idiosyncrasies.