VA-11 HALL-A: Cyberpunk Bartender Action is a drunk, psychedelic dream. It presents a vision of a different era: dark and dazed, equal parts criminal and cozy. VA-11 HALL-A puts you in the shoes of a lowly bartender at the grimiest bar in downtown Glitch City. Despite the circumstances, your bar attracts quite the crowds: big name journalists, high-ranking police, and even singing idols.

The game, advertised under the tagline “waifu bartending”, far surpasses its shallow tagline.

‘Waifu’ is a gaming term that usually connotes certain images: two-dimensional female characters,  huge, unrealistic breasts, explicit (and often bad) dialogue. VA-11 HALL-A does away with these stereotypes, while embracing certain parts of the aesthetic. Certainly, some of the dialogue can be lewd. True to the genre, the female characters are occasionally discussed objectively, their ‘assets’ debated. Nevertheless, topics like sex and dating are treated in an exceptionally nuanced way. Poignantly, one of the main characters, Dorothy, is a proud sex worker. She holds no shame for her profession; on the contrary, she discusses it openly. For the most part, the dialogue comes across as realistic and organic, not simply a venue for internet references and sex jokes.

Regardless of intent, the balance VA-11 HALL-A strikes between developed ideas and unabashed obscenity is not an infallible one. Much of the game’s dialogue on sex and relationships can be interpreted in two ways―as dark, eccentric humor, or as the foundation for larger themes, themes that intersect with everyday reality. Dorothy’s character exemplifies this in particular. Dorothy is what the game refers to as a “lilim”, a robot AI that has evolved to the point of near humanity. Nevertheless, the technology hasn’t quite crossed the threshold into true personhood. As such, some aspects of her personality and appearance don’t conform to her human peers. Her superficial appearance is constructed to look around 13, while she informs you that she is “mentally” near 24.

Self-identifying as a sex worker, Dorothy’s outward age bleakly contextualizes her profession. Child trafficking is a unbearable, unspeakable crime, and a reality which VA-11 HALL-A does not truly set out to tackle. Instead, it shallowly wades through it, making reference to Dorothy’s unique experiences, such as when a man hired her to pretend to be his daughter. Dorothy talks nonchalantly about all of this, a quality which can come across sometimes as humorous, and sometimes as all too casual.

Overall, the handling of Dorothy’s character is complex. Unlike most media, VA-11 HALL-A does not demonize sex work, nor outwardly endorse it. Instead, the inclusion of Dorothy feels like an active discussion, a debate between the game and itself. Jill―the bartender whose perspective you inhabit―frequently questions Dorothy’s motives, the motives of her customers, and the ethics of her situation. Dorothy remains unfazed, placating Jill that it’s her job, and it’s consensual. Jill never seems truly satisfied with this conclusion, but supports Dorothy regardless of her personal opinions. Paralleling Jill’s feelings, the player is left with genuine sense of worry and endearment towards Dorothy. Like in the real world, Jill is not always able to intervene in the lives of her friends, even if she disagrees with them. 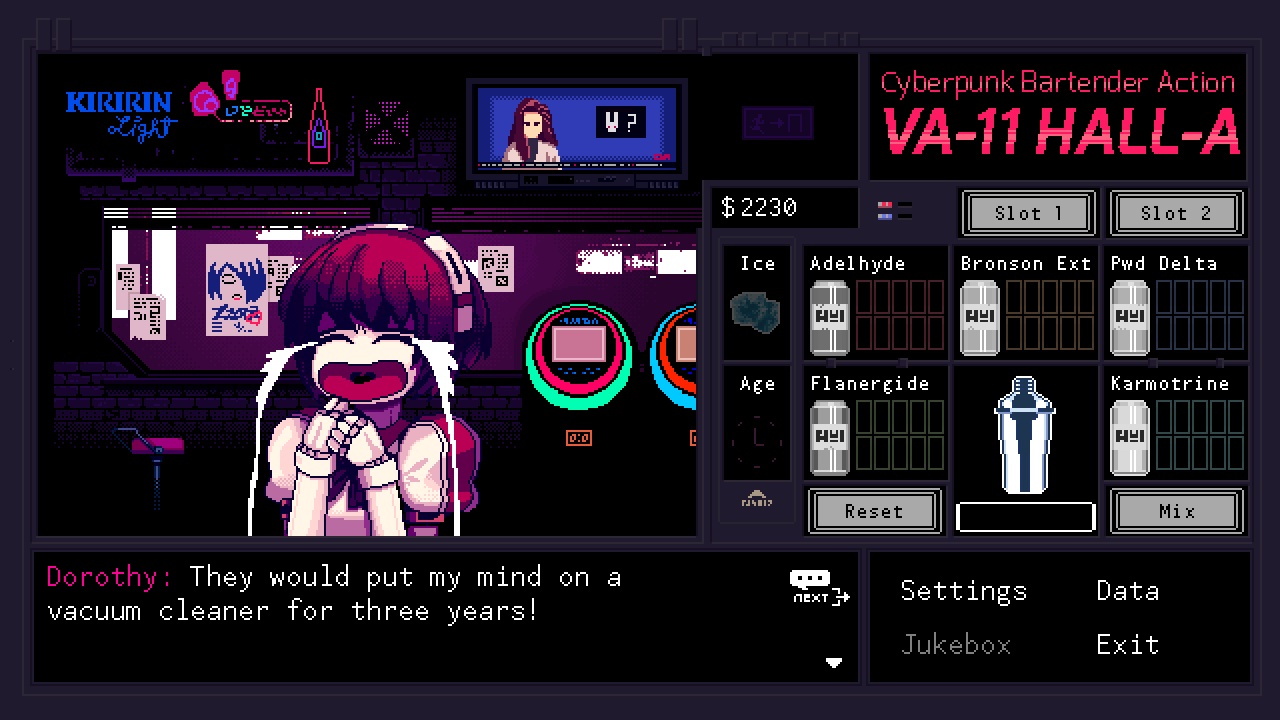 Aside from Dorothy, VA-11 HALL-A enjoys a large cast of fully developed pixel-art patrons. Indeed, much of the fun of VA-11 HALL-A is listening to your patron’s egregious stories. From dogs masquerading as businessmen to vending machines with oddly specific tastes in music, the game reminds you often that it does not inhabit the same reality as you do. Nevertheless, many of today’s social issues are discussed thoroughly and without pause. Namely, homophobia.

In many sci-fi settings, words like ‘gay’ and ‘lesbian’ are frequently substituted for “future-speak”, if not dropped altogether. In these settings, labels are seen as obsolete and unnecessary. LGBT characters simply exist, without thought to categorizing themselves based on their sexual identities. This model for society is often lauded for being progressive, but it is not flawless. In ignoring the language of our current century, these settings erase the actual struggles of LGBT people. While a world without homophobia is certainly the goal, it is something different to imagine a society free of labels. By discarding these labels, one also discards the sense of community that they bring. The LGBT community could not exist without common identities, experiences, and struggles. The future will not simply forget the past.

In this vein, VA-11 HALL-A certifiably succeeds. Taking an approach similar to that of Dragon Age: Inquisition, the game overlays a fantasy setting over actual societal issues. Just as Dorian struggles to gain acceptance from his father in DA:I, Jill’s former girlfriend, Lenore, is rejected by her mother for her sexuality. They may live years in the future, but the reality of homophobia is not forgotten. In addition, instead of rejecting them as a “thing of the past”―the characters embrace labels. For example, Jill, the main character, self-identifies as bisexual. In our age of media, it is still rare to see characters who identify as anything other than straight. While it is nice to imagine a world where these labels don’t matter, representation is still very relevant in the now.

A Lovable Hole In The Wall

Despite it’s shortcomings, VA-11 HALL-A is a visual novel like none other. With intuitive gameplay, clever dialogue, and a host of fantastic characters, there’s a lot to love. While it may take place years from now, it takes care to highlight the struggles common to all of our lives―from our most tender moments to the heartbreaking realities of broken relationships, dysfunctional families and having just a bit too much to drink.