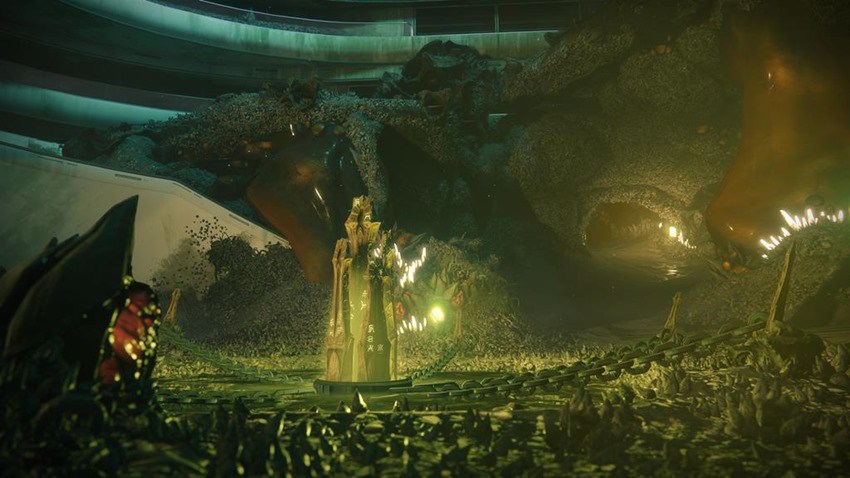 Previously we looked at plain toast, microwave burritos, and how Destiny 2‘s Guardians are basically Mussolini with blue mohawks. It was a grand old adventure, aside from all the brain aneurysms. This time, we go into detail about FashQuest‘s unfortunate portrayal of its alien races. If the idea that art created by humans might reasonably serve as a window into certain ideological assumptions made by those humans offends you, consider yourself fairly warned. There’s nothing to suggest these fascist elements were intentional. Lazy writing ignores it’s own implications. But to have a power fantasy, someone or something needs to be powerless. When power is treated as justification for conquest – you have militarization. When power is said to originate from a divine source, proving the superiority of a certain group or race, you have fascism. 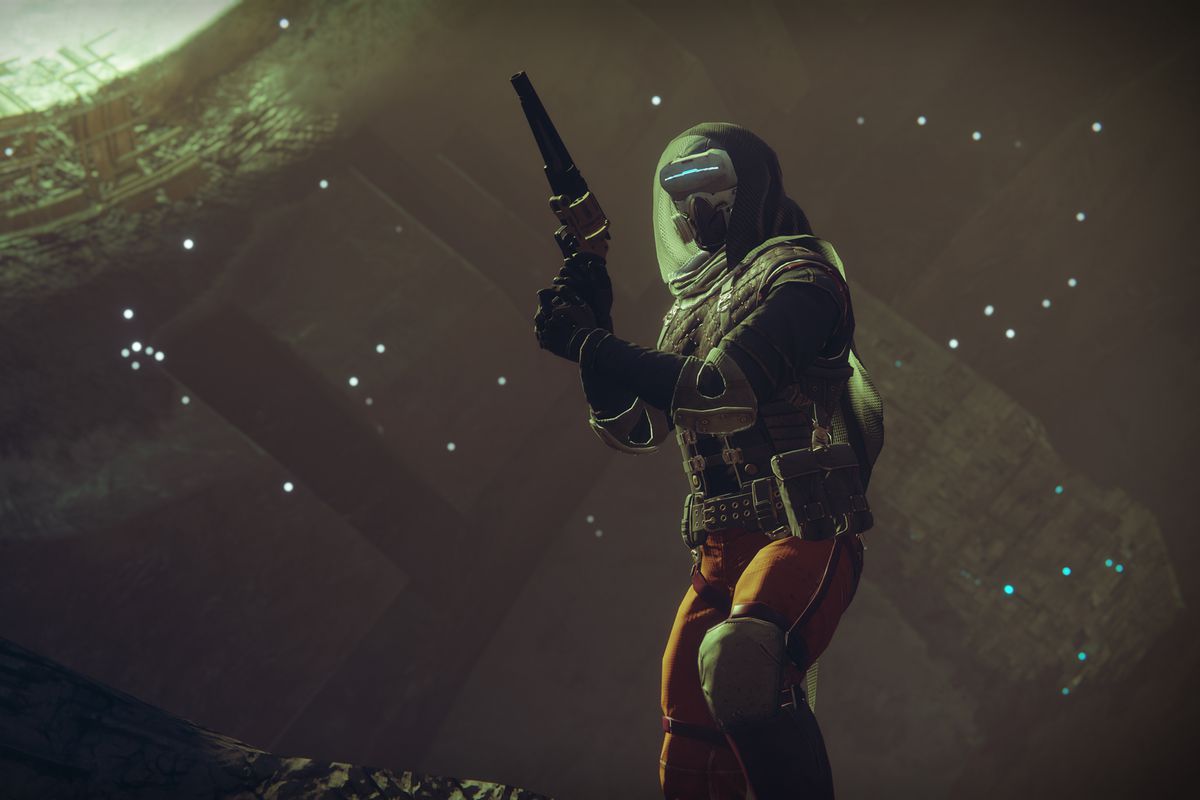 We are, at our core, still an empathetic species, so when crafting narrative justification for the conflicts at the heart of play-as-challenge interactions, writers tend to fall back on portrayals of enemy creatures as somehow lesser, evil, or unworthy. When examined, the idea that we could feel morally justified in eradicating any an opposing force for the purposes of military conquest is a ridiculous one. Any sane adult knows that an ‘enemy’ is just word for the guys on the other side of the conflict. So it takes a lot of trickery – a lot of shifting narratives to fit certain ideological perceptions – to achieve the feeling that genocide is somehow heroic. It’s storytelling, yes, but when stories are told to cultures, they cease to become stories, and start to become propaganda.

I’m not saying Destiny is propaganda, just reliant on some of the same narrative tricks that make propaganda so powerful. At the same time, I don’t think that it’s too much of a stretch to say that games like Call of Duty make certain assumptions about what is justifiable, righteous slaughter and what is terrorism. Replace modern military hardware with future tech, replace terrorists with alien races that have traits synonymous with cartoon portrayals of traditionally marginalized social groups, and you’re effectively playing through the worst aspects of Call of Duty with a new coat of a paint. Marketing like the Independence Day: Resurgence  army recruitment campaign shows that space marine jingoism is an outlook that the military industrial complex finds valuable when offering empty promises of heroism to potential new cannon fodder. 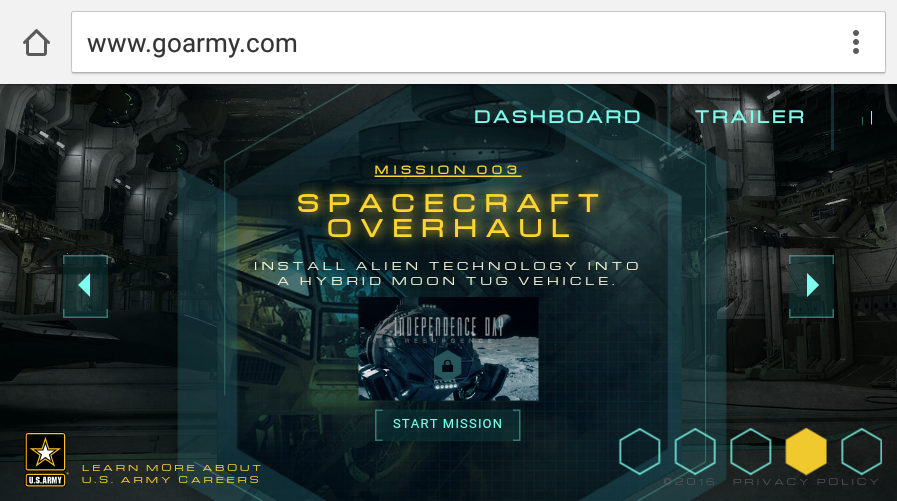 There are, in total, four alien races in Destiny 2. Five if you count the one where Bungie’s character artist came into the office drunk one crisp autumnal morning and re-skinned all the character models. I don’t. You might be thinking “wow, four whole races? That must have given the writers serious scope to create some interesting and varied enemy motivation! I mean, there’s no way Bungie could have insinuated that the rampant extermination of four wholly different races is completely justified!”

I’d take a seat now, friendo. This doesn’t get any easier

Here are some words repeatedly used to describe The Fallen: Scavengers, Pirates, “They’ll take anything that isn’t nailed down” etc etc. The Fallen are a nomadic race who have suffered a species-wide forced displacement due to some vaguely defined space catastrophe. With no stable home, they travel the cosmos on massive barges, fighting desperately to scrape out a meager existence on the scraps of dying civilizations. Maybe, as ‘guardians’, we could find them a permanent home with a nice climate and decent agriculture prospects. Or we could just shoot them right in their economically disadvantaged faces. Yep, that’ll do. 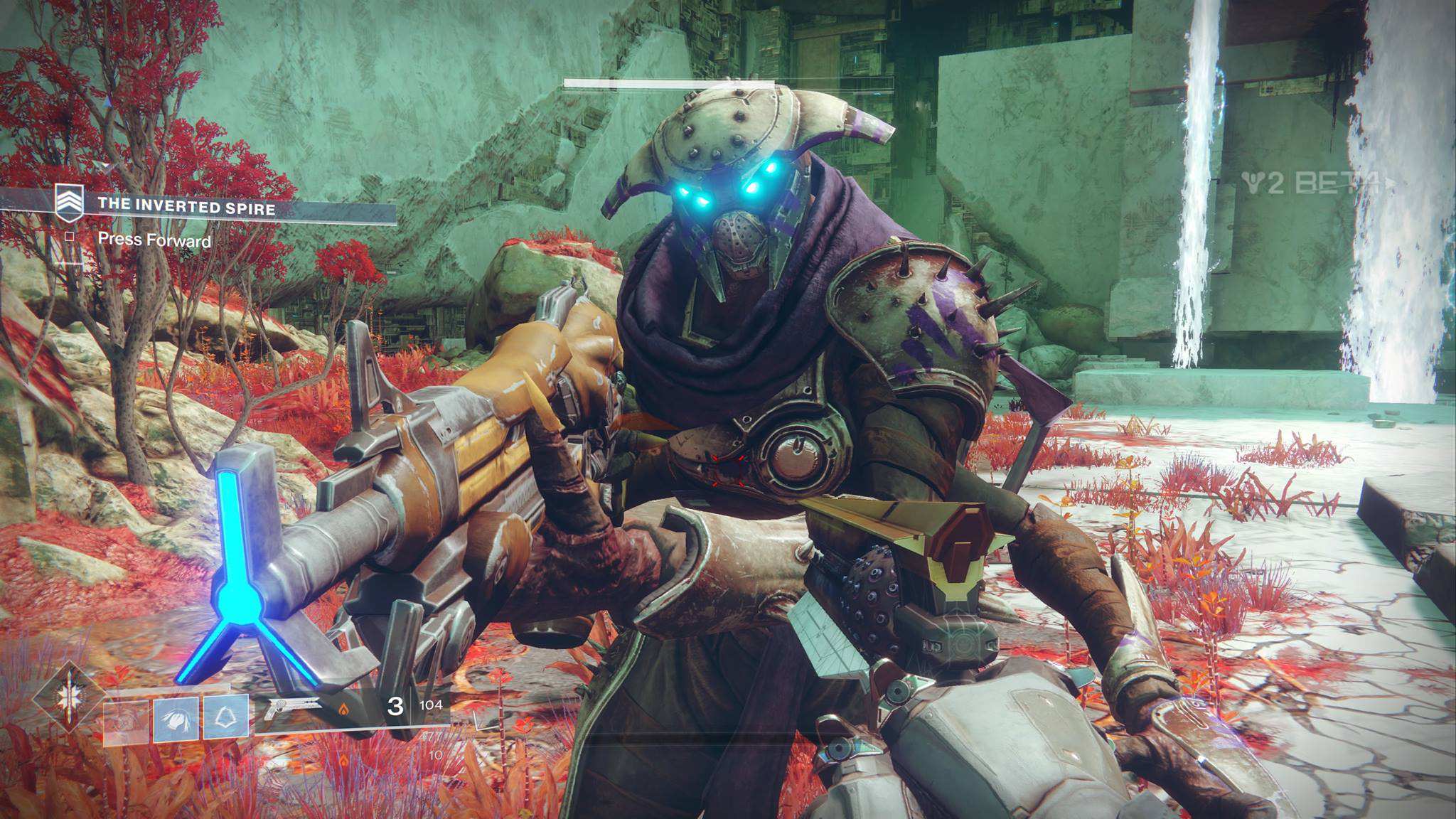 Here are some words repeatedly used to described The Hive: Swarm, Infestation etc etc.  I’m starting to see a pattern here. The Hive live quite deep underground. Getting to them usually takes some effort, so the self defense argument is moot. You’re unfailingly tasked with completely wiping out any trace of The Hive, whilst being constantly reassured by stalwart defenders of the light that they are worth less than dirt. Remember: It’s not fascism if the race you’re exterminating is genuinely inferior! 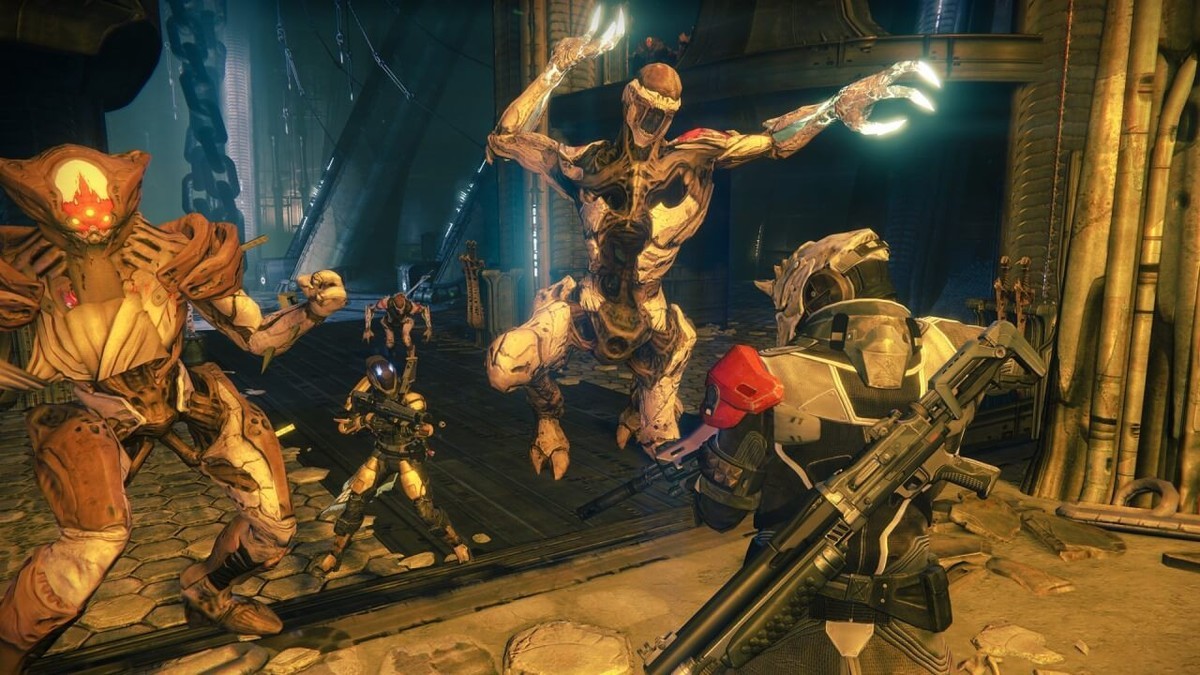 The Vex are a race of constructs that operate under a robotic hive mind. You hear that? They have a definitive set of beliefs they share among every member of their species! They can’t think for themselves! They must hate freedom! How the hell are we supposed to sell these guys stuff when they’re so self sufficient?! Heretics! 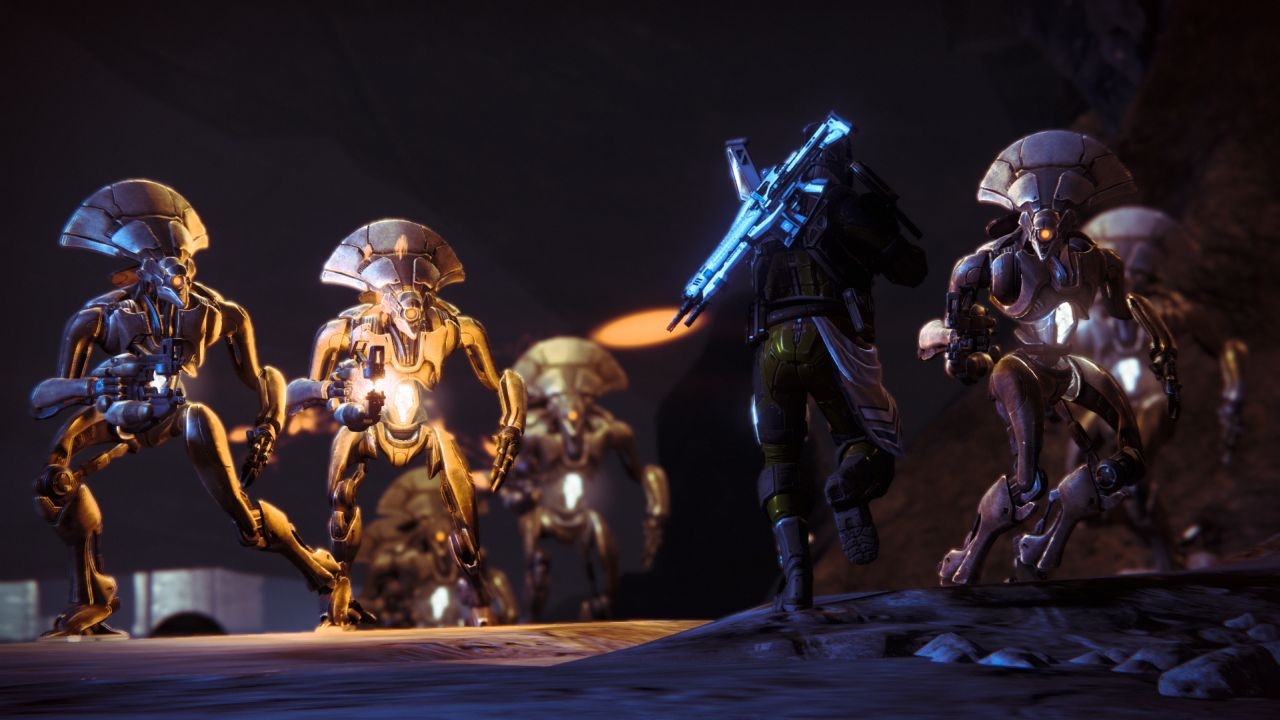 The dudes are big ugly mole people. Emphasis on the ugly. Not like us. We’re pretty and graceful and have shiny white armour and some damn catchy theme music that sounds like angels are about to descend from heaven and deliver us to the promised land where we will rule supreme over the lesser folk for all eternity. You know a great cure for ugliness? Self esteem and a can-do attitude. Also bullets. Lots of bullets 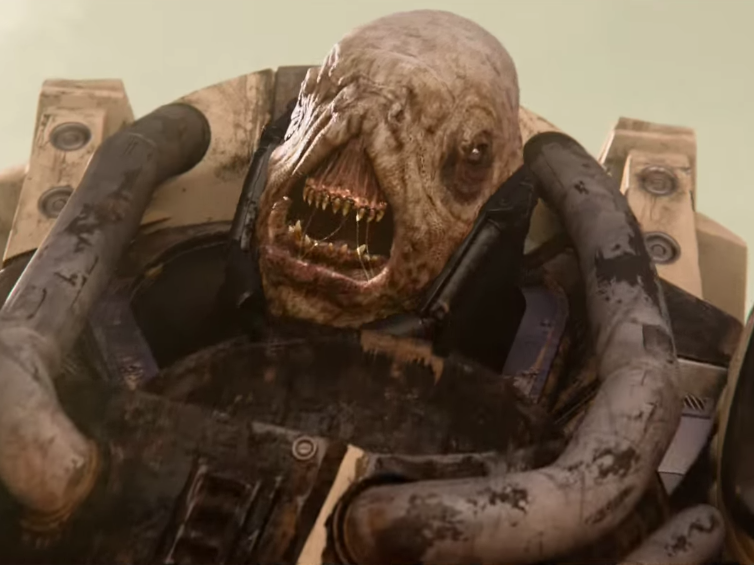 Most gamers aren’t stupid enough to try to emulate games. We need censorship like we need a Gearbox sequel to Colonial Marines. But history has repeatedly shown that the right story is all it takes for good people to believe awful things. If the majority of media a society consumes divides conflicts into unambiguous representations of ‘greater’ and ‘lesser’ lifeforms, certain cultural narratives about otherness are perpetuated. Stories tap into something deeply ingrained in the human psyche, and that’s not always for the better.

Destiny 2 is laugh riot. The shooting mechanics are tight, the enemies explode in all the right places, the environments are jaw-droppingly gorgeous. But the heart of its story is based on so much proto-fascist nonsense I cannot take it seriously. This could have been easily fixed by not relying so heavily on genre cliches. It’s like they watched Starship Troopers and didn’t realize it was a parody, although even the marines in that film didn’t claim they were given divine right by a giant space bollock.

I’m not asking for games to fix all of societies ills. I just want to play better stories.