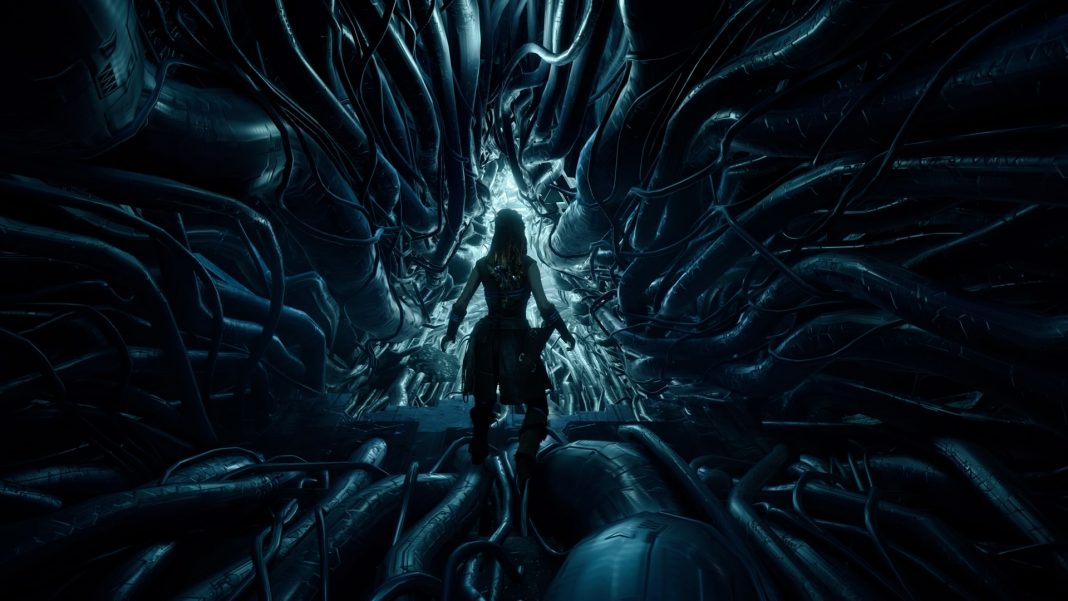 Despite being released way back in the murky, pre-technology days of slightly over a year ago, Guerrilla‘s open-world masterpiece Horizon Zero Dawn continues to inspire a wealth of a new fan art, cosplay, and incredible photography. To celebrate Aloy’s one year anniversary, New Normative asked some of our favourite capture artists to share stories from their journeys in the wilds.

What follows are captures from the Horizon Zero Dawn journeys of four gametography artists – Duncan Birnie, Lady SnipeShot, SpiffSnaps, and Luziferian – and the stories of how they came to be.

“As I perched Aloy on that rock, I just looked in sheer amazement at the ruins before me, the jagged metal structures cementing in my mind the ideas and atmosphere of the wider world of Horizon Zero Dawn. Then to my amazement of course, one of them… moved. Different to the others, it was curved in shape and slowly glided across the other buildings. I’d seen the Tallnecks in various pre-release trailers and images, but here was one in my game. Finally!” 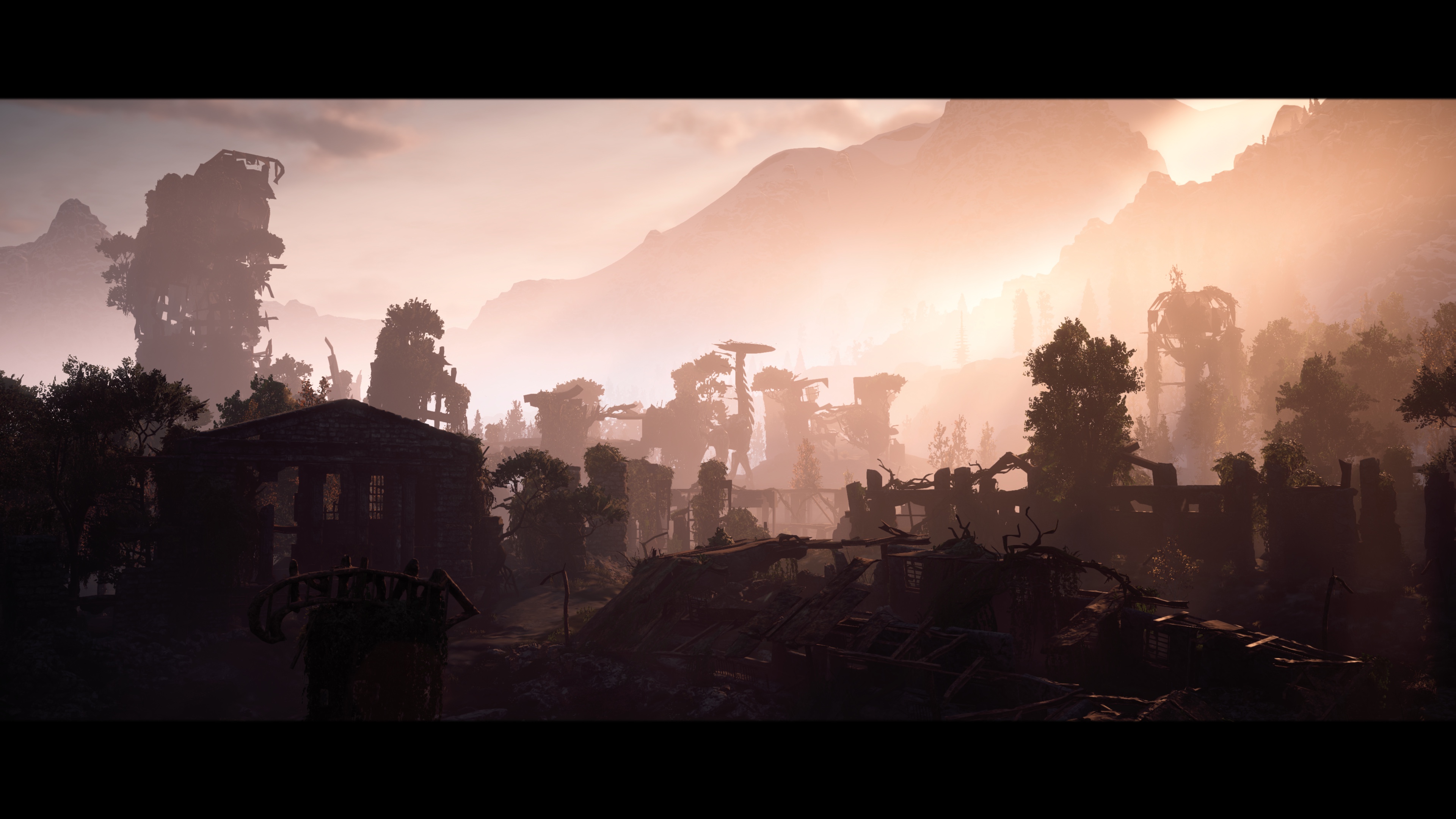 “The morning light got brighter, and I heard the now-recognizable sound of thunderous footsteps echoing around the ruins. I followed the sounds and then all of a sudden it emerged, from behind a very large building, in all it’s glory. I was so struck by it that I literally didn’t move, I just swung the camera to keep it in view. Man oh man, it was so graceful. It wasn’t hostile as I feared it might have been, so I just watched it walk, the feet crashing down into the dirt. It walked straight towards Aloy, turned at the last minute, and continued on its way. I was still too dumbfounded to let it get away, so I gave chase. I continued to watch it walk, fascinated by its movements and its sheer size. I remember running between its legs, the thrill of dodging certain death by crushing amping the sense of awe and scale this game was consistently presenting me.” 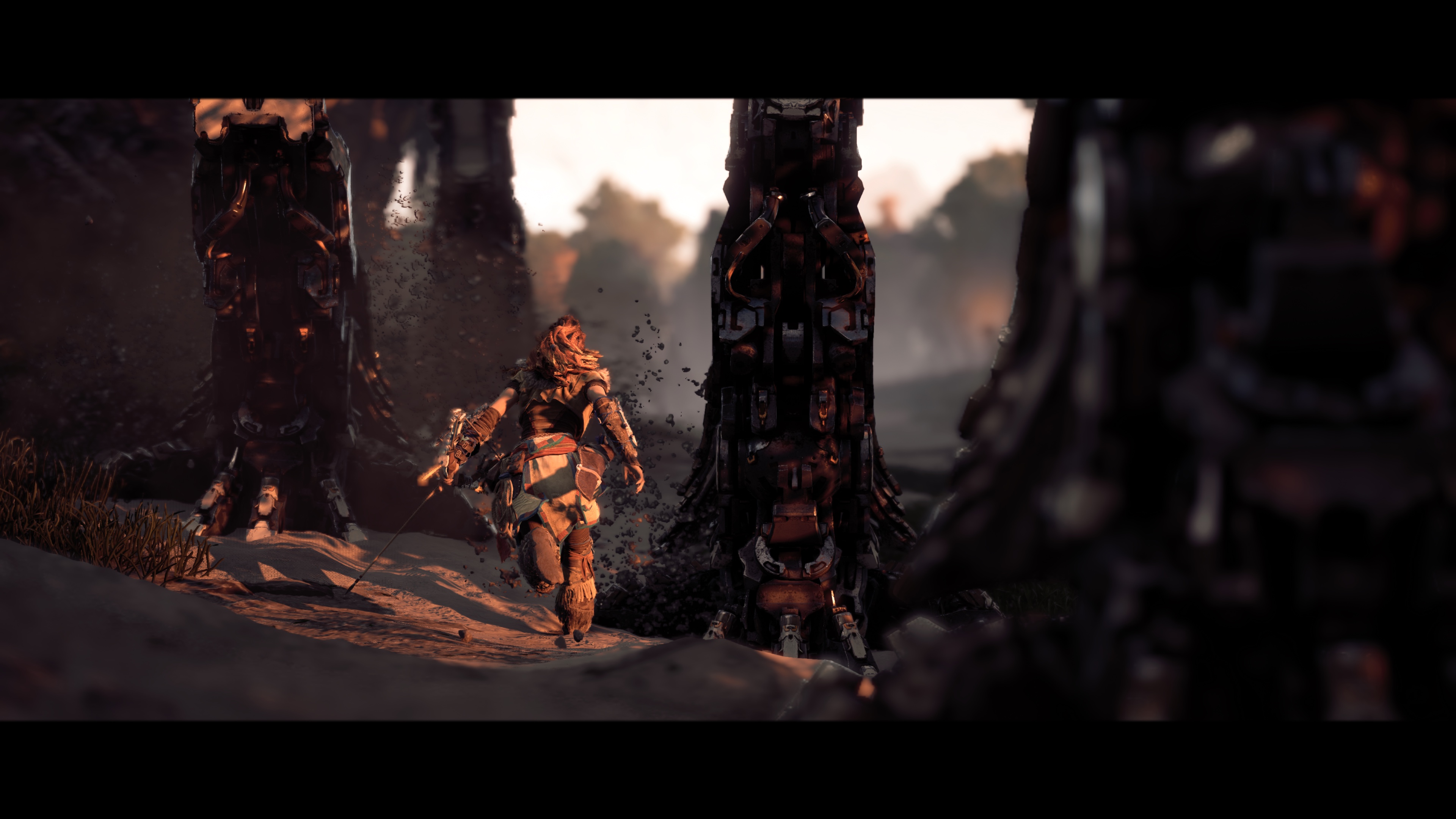 “…that’s what Photo Mode is all about for me: capturing the variety of incredible feelings I experience when exploring strange new worlds”

“One of my most vivid memories playing Horizon Zero Dawn was the first time I saw a Stormbird.” 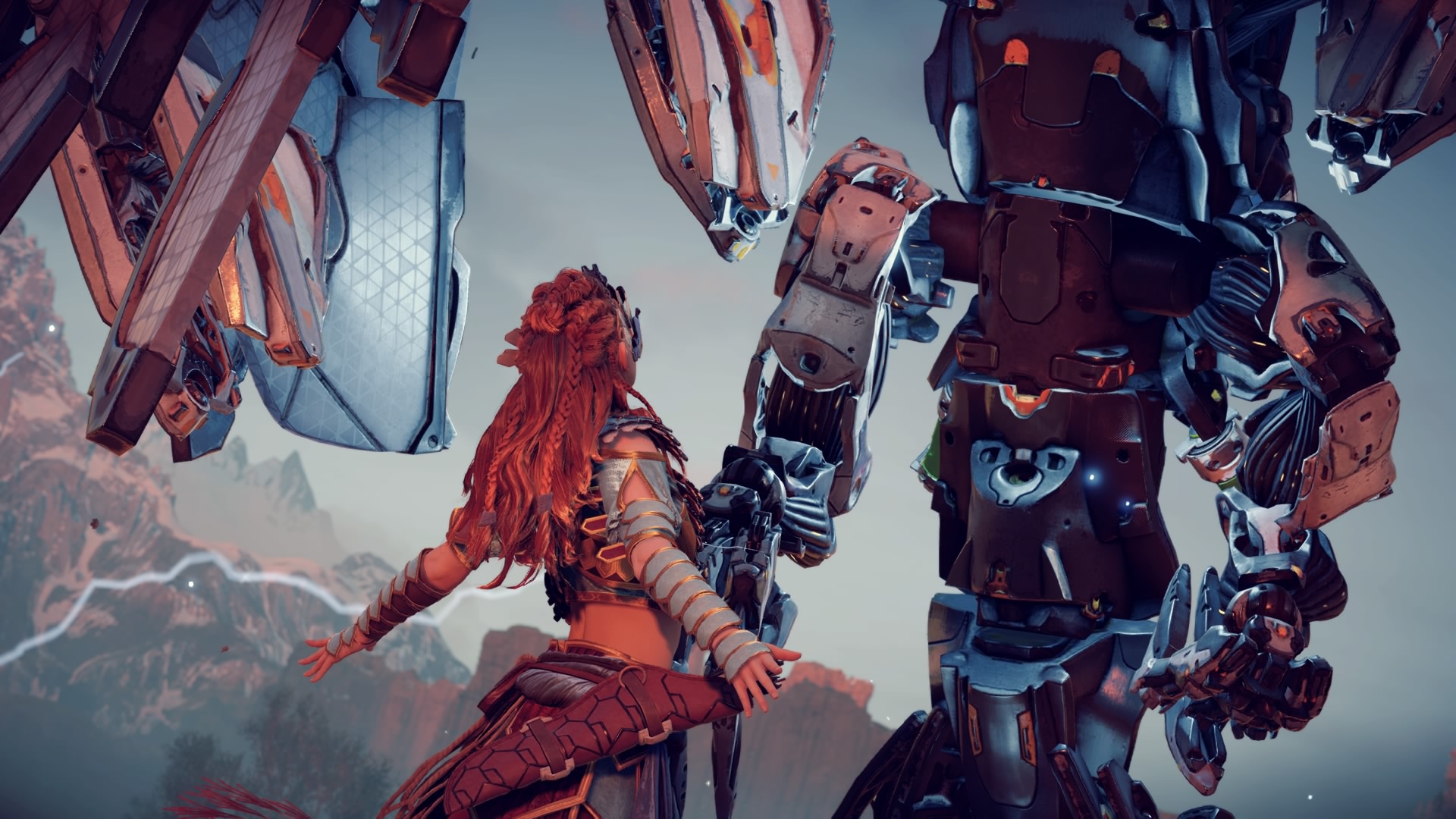 “The very first time you come in contact with a Stormbird is when following the pass where the map transitions from the grassy wooded lands into the desert. I remember the feeling as if it was yesterday. I was traversing the path that curves around the ridgeline when off in the distance I heard this loud whooshing sound. I knew that whatever this was, was enormous. I slowed my pace and ducked down trying to be stealthy. As I turned the corner, this gigantic bird came into view. It was circling over the desert, guarding the lands like a flying sentinel. I remember hiding in the bushes for a moment taking in the grandeur of this beast, the evening sun highlighting its features. I knew at the time I wasn’t equipped to go head to head with him, so I left, trying to stay out of sight until I was away from the area.” 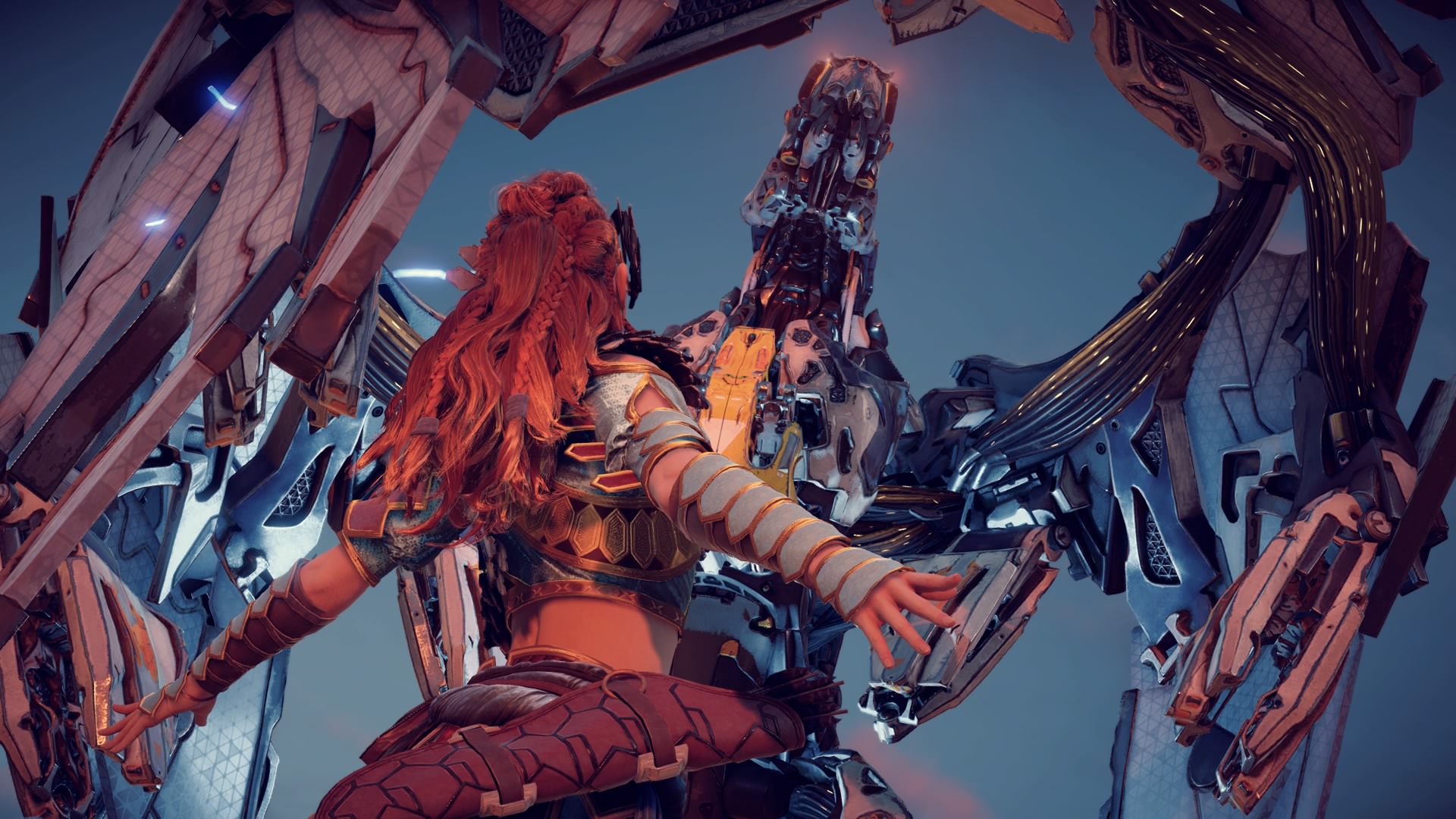 “Later on in the game, after I knew I had the built up my skills and had better armor and equipment I came back to him just for the challenge. It took some time, but eventually I conquered him. Now that I can, instead of destroying the Stormbirds, I override them making them my friends. We now fight side by side and rule the desert lands!”

“It’s easy to forget how intimidating an open-world AAA game can be at the start; the greyed-out areas on the map taunting you like a wrapped present weeks before a holiday. Horizon Zero Dawn is particularly overwhelming when you realize the scale of the map and that it can only be traversed on foot, initially. Equally daunting to me was the size of the Thunderjaw machines.” 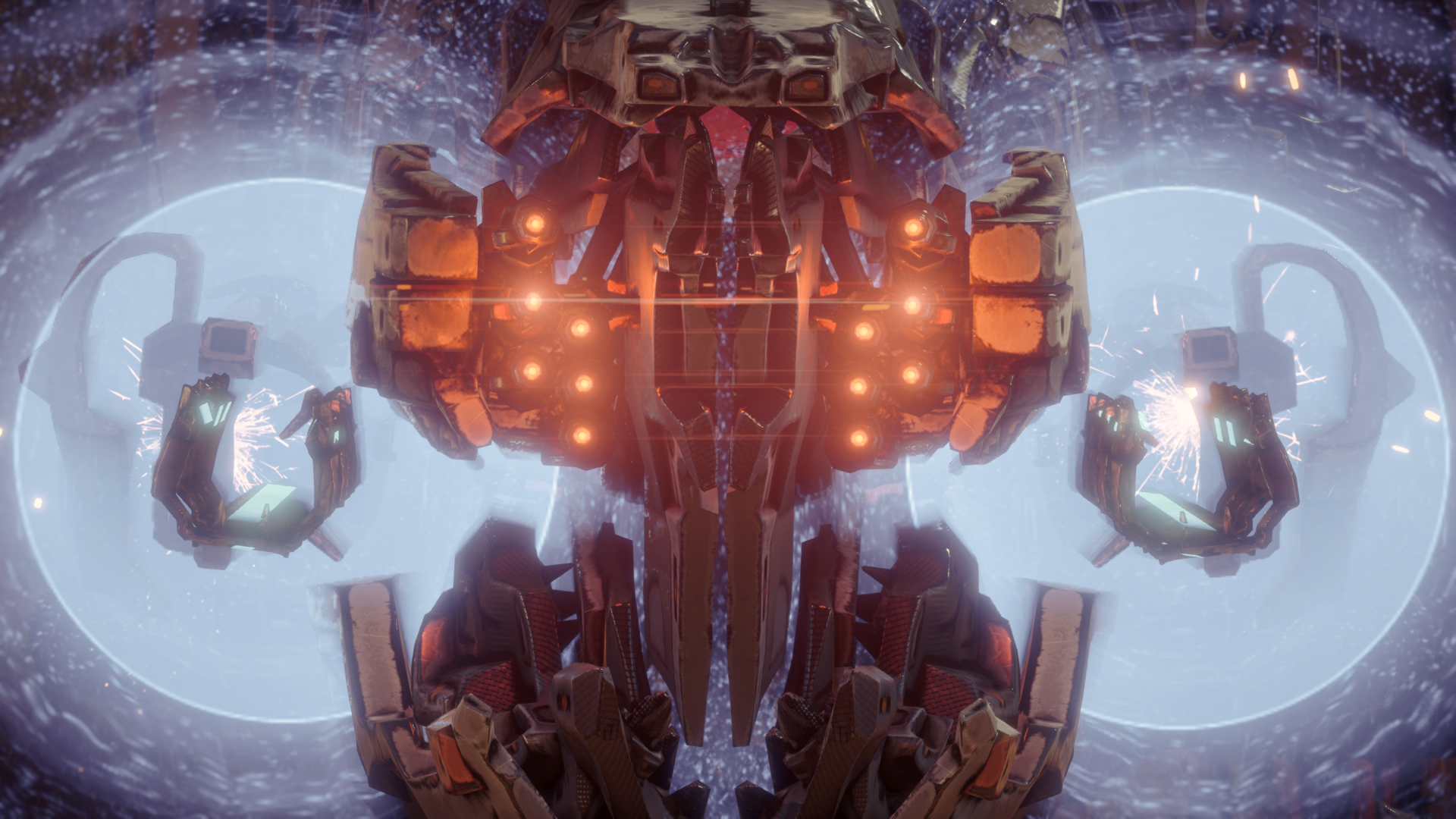 I encountered a pair of them while hiking up a canyonside a few days into my gameplay. Six weeks and forty XP levels later, it was time.  I returned to the site and stealthily turned one of the monstrous beasts to my side, then dove into the fray with my camera at the ready (there’s not much left to be daunted by once you’ve overridden a Thunderjaw). My protector did most of the work and uncovered what resembled a heart assembly of the contending Thunderjaw. I’d never noticed such a component in a machine before. I inspected the flaming wreckage after the epic victory was secured. The “heart” was like an alluring (and hefty) jewel that I wanted to salvage.” 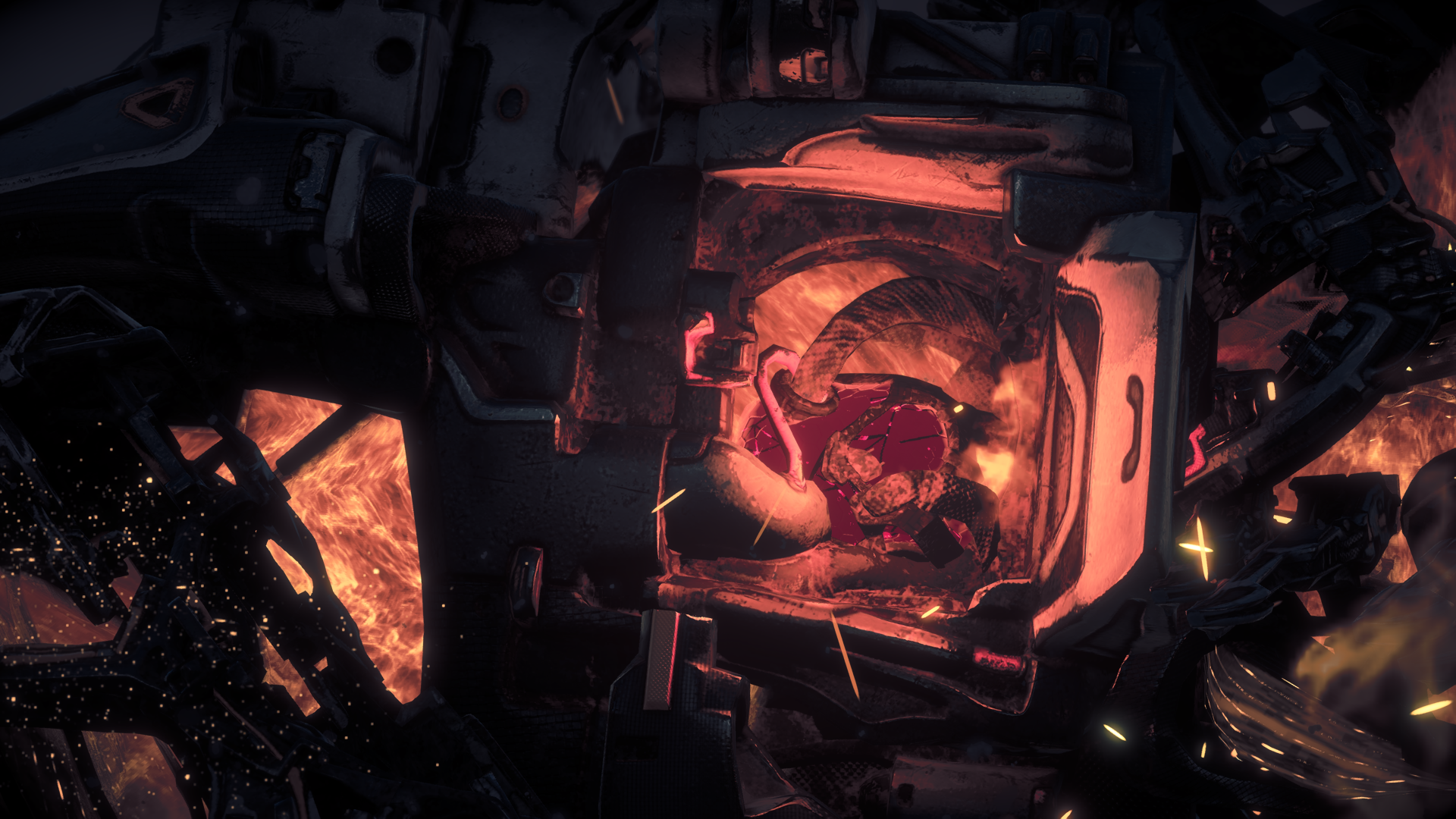 “Funny how a relatively small detail can prove that much more challenging and rewarding to uncover than the vastness of an entire game map.”

“I’m both a real live and virtual photographer from Northern Germany and known as Luziferian/GameroGrapher. As much as I liked some storylines of Horizon Zero Dawn, and my focus is on landscape photography, my favourite memory is quite different. Since I really admire art, design and Science-Fiction I was fascinated by the visuals of the cauldrons.” 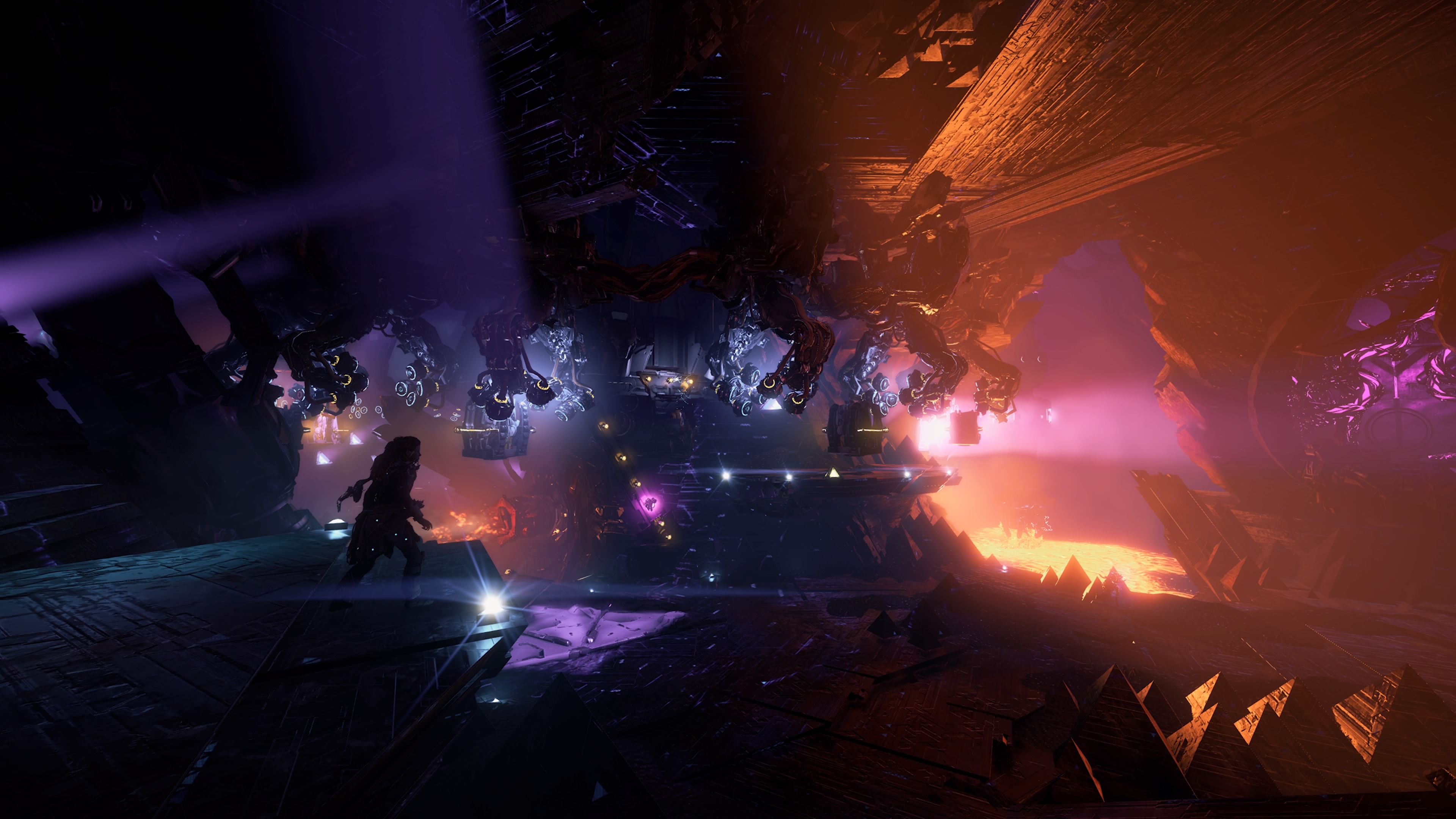 “When entering Cauldron Sigma it reminded me of the biomechanic artworks and designs of H. R. Giger, and the awesome lighting was reminiscent of Ridley Scott’s Alien – a photographer and film nerd’s playground!” 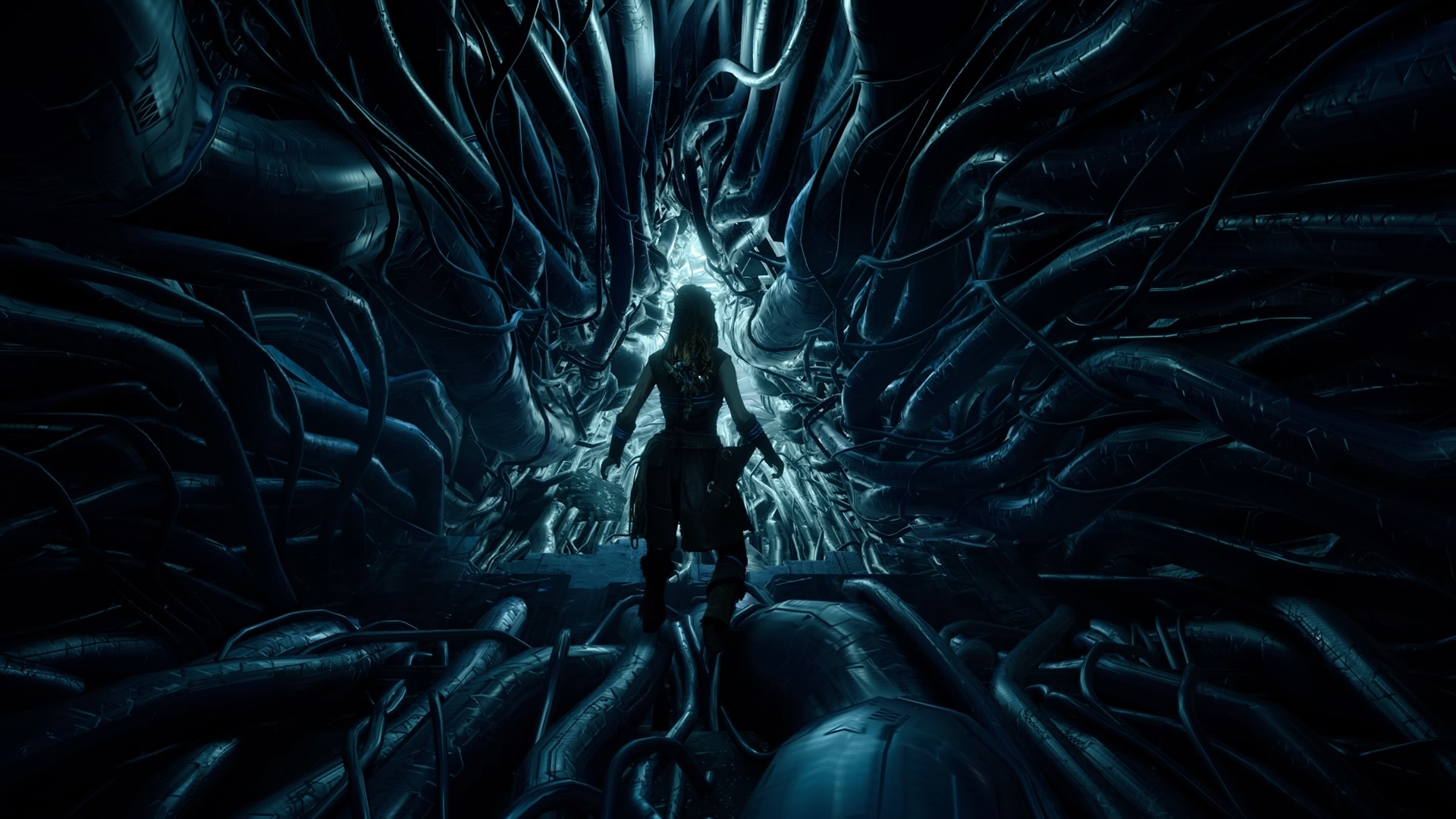 “Ten months later I explored the Frozen Wilds and entered cauldron Epsilon for the finale of the DLC. I considered the ones in the main game quite good but the cyberpunkish 80’s vibes caused be purple and yellow lighting made Epsilon stunning. This capture is one of my personal favorites I took in Horizon Zero Dawn.”

You can keep up with Duncan Birnie, Lady SnipeShot, SpiffSnaps, and Luziferian on Twitter, and head over to Virtual World Photography for stunning captures, competitions and more. Or for more Horizon Zero Dawn Gametography, check out our previous feature with SpiffSnaps.