Turns out people use transphobic memes without ever knowing they’re transphobic. On August 20th 2018 Cyberpunk 2077’s official Twitter account responded to someone with the response “Did you just assume their gender?!”

Queue the cacophony of deep sighs and eye rolling. Those of you not familiar with this meme here is an excerpt from Know Your Meme on it:

“Did you just assume my gender” is a punchline used to mock the sensitivity of feminists, Social Justice Warriors, and the discussions going on in the LGBTQ community, particularly the Trans and Queer communities, involving gender identification.

Yep, it’s a transphobic meme. The meme is used to mock people who care about other people’s feelings and comfort, as well as used to mock trans and nonbinary individuals who share their pronouns. Between this and “I Sexually Identify as an Attack Helicopter”, it’s one of the laziest memes about mocking trans people out there.

According to fans of the theme, the joke is about making fun of cis allies who speak on trans people’s behalf and making fun of nonbinary people with more than one set of pronouns or ones other than “He/She/They”. What they get wrong is that they aren’t doing trans people any favors like this. They ignore that nonbinary people are trans, anyone who identifies as a gender that’s different than their assigned gender is trans. Cis people don’t get to decide who is and isn’t trans.

As for making fun of cis allies, it has nothing to do with them speaking for us. If they had an issue with cis people speaking for us the majority wouldn’t have spent so much time telling trans people how to feel. It’s more that they don’t want cis people helping trans people, most people know we are a very small group (less than 1% of the population) and we can’t do much without help. They have an issue with cis allies helping us because it makes it harder to walk all over trans people.

Considering the group the Twitter joke attracted and the dozens of responses, it’s pretty safe to say it’s either transphobic or transphobic people vouch for it. Either way, the reality of it is trans people are likely too scared or uncomfortable to correct people (especially in person) and that no trans person says this in response to someone getting their pronouns wrong.

Overall the opinion seems to be near unanimous. Some trans people were saying that everyone was overreacting to the joke. But the large majority appear to be quite upset at the lazy low brow humor. Several mentioned they no longer wish to purchase the game. 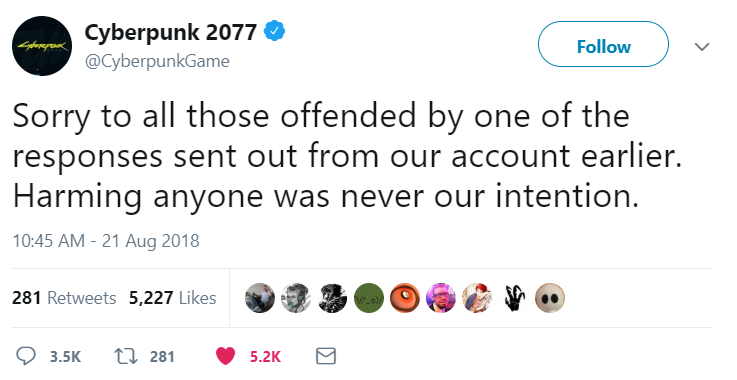 Well, it’s something, that’s for sure. Not a great apology but considering they likely don’t want to upset the larger audience they kept it simple and at a sort of half-apology. It really feels like they’re saying “Sorry you all got offended”.

Honestly, more harm was done by their audience trying to “defend” it. It’s a shame to see what kind of audience this game attracted considering what cyberpunk stands for. It’s anti capitalism, its pro transhumanism, among other things. It’s certainly not about kicking those who are already down. It’s about punching up.