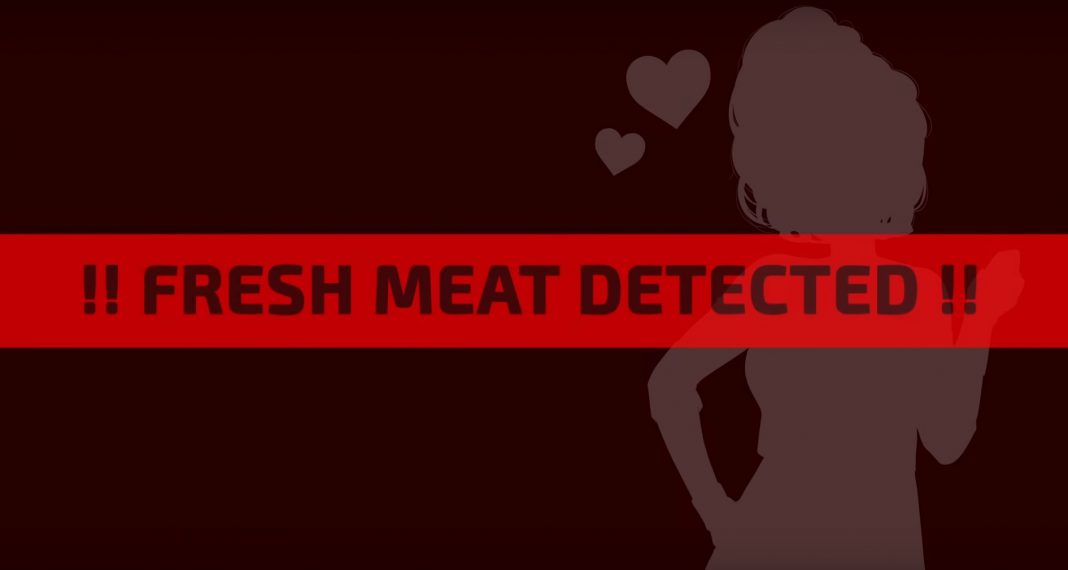 Some of you might be familiar with HuniePop, it’s a game with an adorable anime-esque art style about puzzle games and dating seductive and salacious ladies. If you’re familiar with Hunie Pop the game then you likely already know they’ll be doing a sequel. If you didn’t then you might want to check out this video full of sexual overtones off-color language.  The video goes over all sorts of stuff. Like the locale, spin-off titles, including spin off characters. It also shows off some new ladies, one of which is Polly Bendleson; a “traditional” trans gal who loves make up and also “has a dick! [/sic]”

Yep, she has a dick. As one of the many bedicked girls out there I thought I’d provide some thoughts. Her section of the trailer starts off funny, being introduced in a “new fighter” style from Smash Bros. Then we get a big close up of her bulge, which she doesn’t tuck. Ok, fine, tucking is a pain and sometimes painful but I don’t like the one trans female character being pitched solely on her genital status. 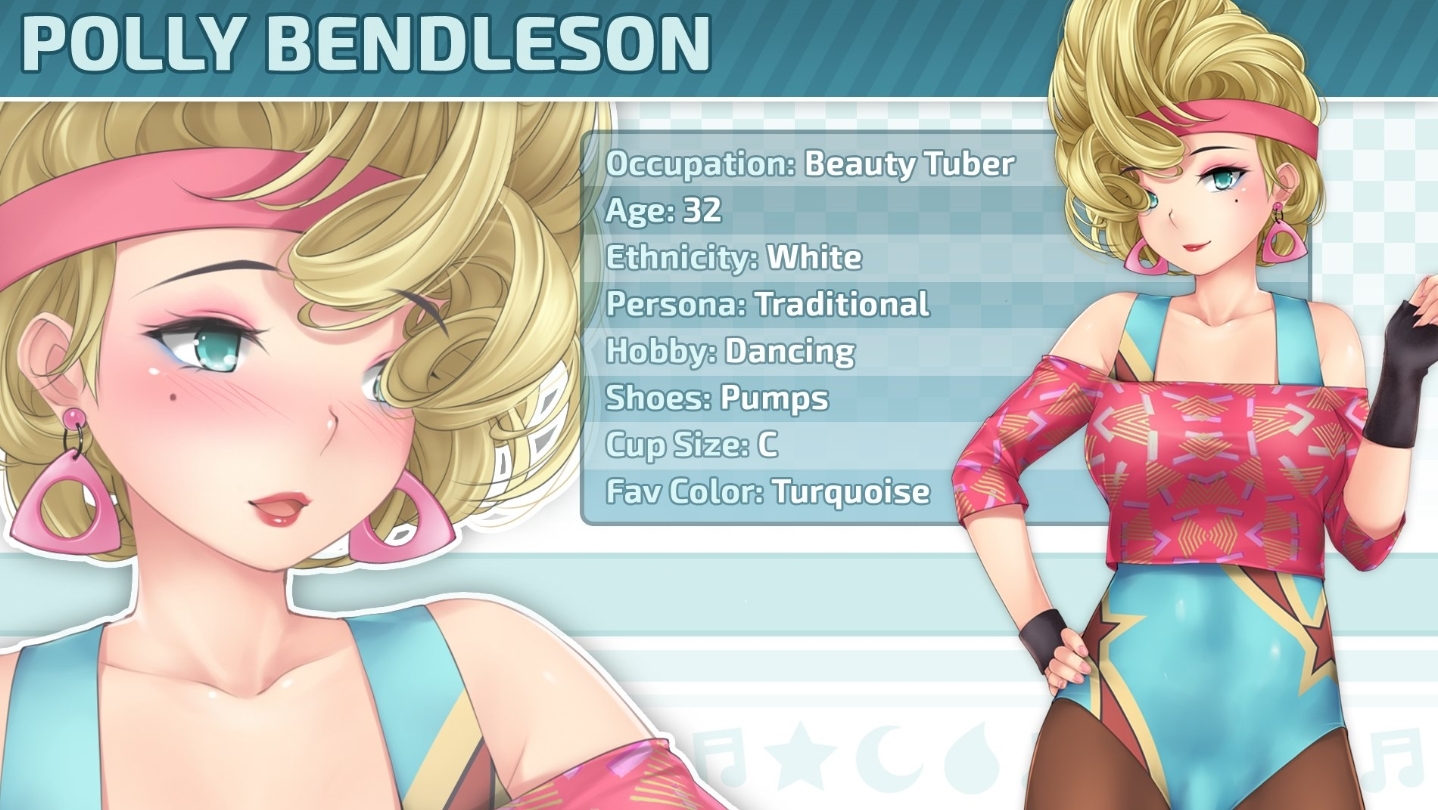 All in the Presentation

Polly has the coolest design, she pops on screen with a very 80s aesthetic of shoulder-less top, updo, leotard, and stockings; very adorable. As Polly’s intro goes on, the announcer goes over her likes. Makeup, fashion; generally stereotypical feminine things. Her main goal in life is to be a house wife. I don’t particularly agree with the stereotype of trans women being obsessed with feminine presentation, I know plenty of trans women who are butch or masc presenting.

Despite how Polly is represented I relate to her. I dig her vintage aesthetics, her looks, and her body positive attitude. I also appreciate her love of femininity, house wife dreams, and her dick. See how weird it is to bring that up unprompted?  But as someone who talks about trans representation a lot in gaming media, I have to go over the flaws.

Considering HuniePop is a game about getting laid, Ms. Bendleson is getting portrayed sexually off the bat. I’m very sex positive, and I believe it’s possible to portray trans women sexually without fetishizing us. But based on this video, they did not manage to do that. From the moment she first appears on screen to the final words about her genitals and the player needing lots of lube, we are told that she is here because she is a chick with a dick. She exists in the game as a fetish.

The other issue, although minor is potential unrealism. Polly has a C cup, trans women don’t typically get bigger than an A and won’t reach tanner stage V without help. Some believe progesterone is key but it’s unstudied. If she wants anything bigger than a B she’d have to get implants, good for her if she did. 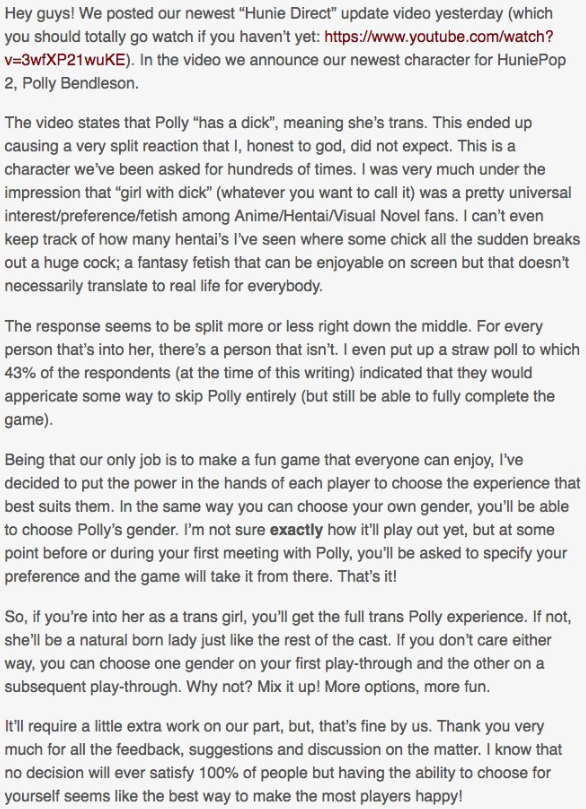 In the picture above you can even see that from the beginning the dev made Polly to be fetish fulfillment. I also don’t appreciate the “natural born lady” comment. I was born a lady but my body seemed to disagree. Though, I can appreciate them wanting to keep her realistic. Either way it’s a shame, I really like Polly and I think she can be in the game and not be fetishized, but it seems like the devs have already decided that fate for her. Who knows to what extent though? We won’t find out until the game launches.

So what’s wrong with her being portrayed as a fetish? When Polly is viewed explicitly as someone to fulfill a fetish she loses her identity. She becomes a pair of breasts with a dick, she is treated as an object, a toy. It’s dehumanizing. When the world thinks of you as a group of perverts, rather than just trying to live your happy authentic life, this kind of thing only builds on it and further alienates us. After all, it’s easy to take away human rights if you don’t consider them human in the first place.

How should Polly be viewed though? As she is honestly, just stop bringing up her dick status. Pull the focus from her genitals and focus on developing her as a female character that just so happens to have a dick. Honestly, it doesn’t need to be mentioned until the last date before you two get physical. People’s genitals are only their partner’s and their doctor’s business.

Regardless, if the HuniePop team puts forward the right amount of work, talk to trans people, hire a trans fem voice actor, and stop focusing on her dick, Polly could be the best representation we have.