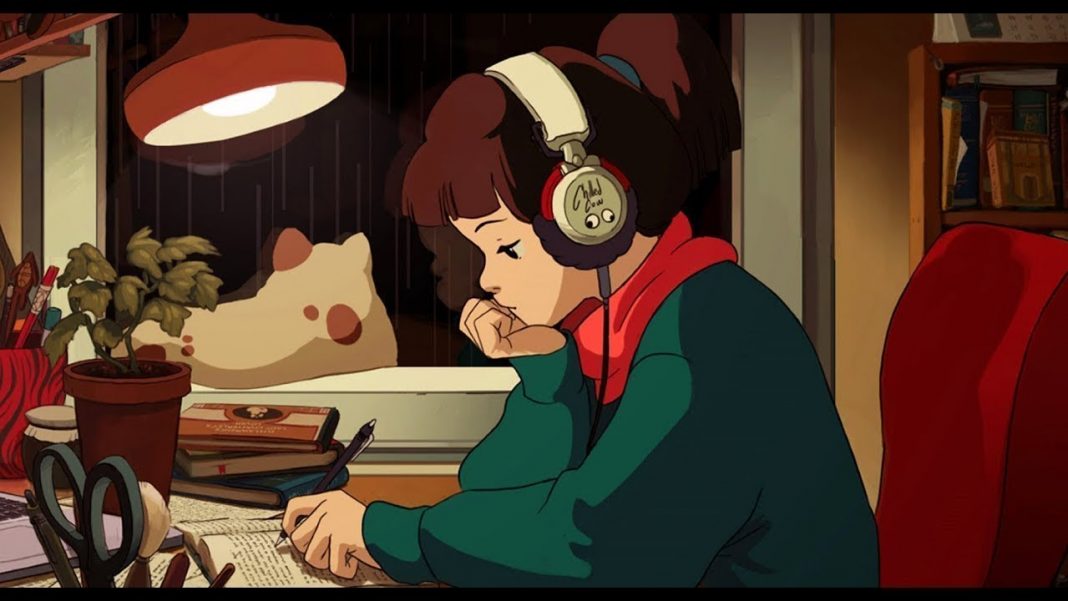 Have you ever noticed that long-running YouTube Livestream of an anime girl studying? It claims to be perfect music to study/chill too, and it kind of is. Lo-fi music emerged from Vapourware and has found a nice niche as background music. This music is perfect for playing while you’re studying, reading, or even playing a game with a soundtrack that’s too full on for your current mood. Game soundtracks are nice, but they can occasionally be a bit much. You don’t always need to hear something devised to soundtrack taking down a god-like boss. Sometimes, you just want to relax.

These playlists feature remixes and extracts from game soundtracks, organised to be a relaxing experience. Most even bring with them that pleasant twang of nostalgia with recognition of the song’s origin. Lo-fi’s main purpose seems to be providing the background noise to other activities, but they’re also great for general relaxation. They can be a calmer choice for those who need some noise to fall asleep or even to help with mindfulness. Whatever purpose you have for them, these are some highlights of gaming sourced lo-fi music.

The Legend of Zelda

This playlist takes inspiration from across The Legend of Zelda series. These lo-fi remixes will fulfil every requirement you have from the genre. The music is slightly more up-tempo than some of the others on the list. However, this is relative to a very relaxed genre so there is still plenty of chilled out moments. There is a slight weighting towards the Nintendo 64 era in the selection, those games are a more common nostalgia target at the moment so it is understandable. A particular standout is Marble Pawns – Zelda’s Lullaby.

Night in The Woods

The music to Night in The Woods is borderline lo-fi its original form. This particular cover takes one of the better songs from Mae’s in-game band and gives it the lo-fi treatment. It’s a fantastic cover of the song, a re-interpretation that maintains the spirit of the original but calms it down a little. It’s also free from the inevitable blotches of wrong notes when you play it in game. Hopefully, they’ll be more covers like this produced, this soundtrack is perfectly suited for it.

Music in Animal Crossing has always been relaxing. There is even a plug-in for Google Chrome that plays the game’s music corresponding to the actual time. The soundtrack is what makes the game the perfect way to relax for a few hours. This lo-fi playlist goes even further. With this, the relaxing animal crossing soundtrack becomes a permanent stream of easy listening beats. This playlist takes inspiration from every incarnation of the game, so you’ll recognise bits and pieces from across the series. Expect to be occasionally thrown back to your GameCube Animal Crossing Town, as well as familiar favourites from New Leaf.

The music found in Pokémon games is not the calmest. Big scores are used to make the Game-Boy era sprite battles feel as epic as the cartoon series made them out to be. Making big tunes out of the game boys limited hardware is part of what made the original Pokémon games such a triumph of imagination. This remix takes the basics of those songs and reworks them into calming lo-fi background noise. This playlist is perfect for getting things done. The Goldenrod City Soundtrack is a particular highlight. A remix from Let’s Go also features, that’s a remix of a remix which starts to become a little abstract from the original.

The third autofill suggestion for Stardew Valley is Stardew Valley lo-fi. While the farming simulator has its problems, music isn’t one of them. These tracks aren’t even remixes. They are tracks selected and curated from the game’s expansive soundtrack to best match the lo-fi genre. It works pretty well, serving as another example of why Stardew Valley is one of the best relaxing games out there.

Kingdom Hearts isn’t the first game that comes to mind when looking for relaxing music. This playlist makes a good argument that it should be. These lo-fi tracks earn a place with the well-worn Animal Crossing playlists. From the first slowed down PlayStation intro tone, this playlist will calm and delight while you wait for Kingdom Hearts 3.

Whoever compiled this lo-fi playlist had probably been playing a lot of Smash Bros. Kirby and Ness are apparently best friends in some peoples imaginations, so their music is combined into one playlist. It doesn’t really matter why these two series are jammed together when the music is so good. The highlights include Earthbound by Nolandandfriends and Say Fuzzy Pickles by RecD. Mother 3 is never coming to the west, so use this playlist to calm down whenever you get the urge to fire off some angry emails to Nintendo.