Australian developer, Samurai Punk is inviting gamers to experience a future where guns are the solution to every problem. In their upcoming virtual reality title, The American Dream, players explore a vast futuristic complex and shoot everything. The complex, constructed by a group of respected gun manufactures, is a ‘World’s Fair’ styled attraction. Their goal is to show American’s the virtues and everyday uses of guns for common tasks.

It’s a tongue-in-cheek satire game similar to Owlchemy Lab’s Job Simulator. The player utilizes a variety of firearms to complete typical, daily tasks. Eating a meal, driving a car, working to provide for your family; everything is handled with guns.

This is the point where second amendment conservatives start clutching their pearls in fear that I’m going to criticize this sort of laissez-faire view of guns in video games. Sorry to disappoint, but if anything The American Dream doesn’t go far enough in it’s grab for absurdity. American’s already use guns for a multitude of unusual, sometimes bizarre purposes. With that in mind I’ve put together a small list of tasks Samurai Punk may want to consider including in their game.

[For the purpose of this article I omitted any situations where guns were handled improperly resulting in injury or death. This is meant to be a look at unusual and offbeat everyday jobs performed by guns, like those featured in the game. With the possible exception of one of the amateur lumberjacks, the following examples all fall within the broad category of safe gun use. Enjoy.] 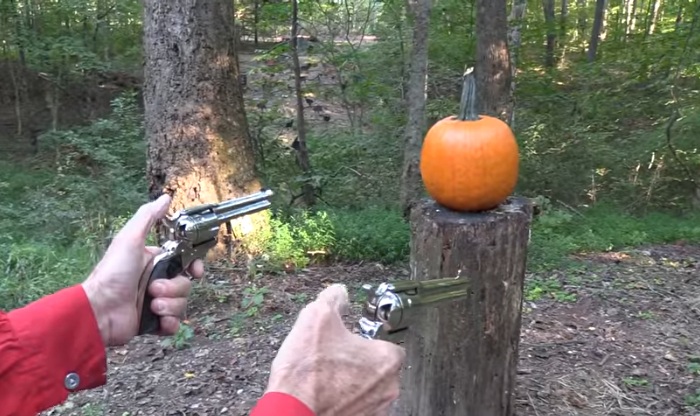 Why would you bring a knife to a pumpkin carving fight when you could bring a gun? That is likely the question Greg Kinman asked before posting some videos of himself doing the most efficient carving job ever on some unsuspecting pumpkins. Kinman has carved up pumpkins and watermelons alike with his personal arsenal. You can find more of his work on the Hickok45 YouTube channel where he continues to show the gourds who’s boss.

Once you’re done with your pumpkin you might as well chop down some firewood. Sure you could make a separate trip to grab your axe, but this is America and you’ve already got your gun in hand. Might as well let loose on some unsuspecting poplar. This is actually a fairly common practice according to my quick Google search. If a tree’s gotta come down and you’ve got bullets to spare it just makes sense to kill two birds with one stone. After all, what could go wrong?

After the chores are done it’s probably time to head home for the day, or is it? Better check the clock. No true American would want to be caught unaware while glancing down at their watch. You never know when thieves or small game could be about. Luckily with the pocket-watch gun you’ll never have to let your guard down. This probably also lends itself well to some puns about killing time.

Another time when you could really use a gun is when you need to unlock something, but also remain vigilant. Starting all the way back in the 17th century Jailers have recognized the need to have a gun in hand at all times. To avoid this, the jailers began filling keys with gun powder. This way the keys could be detonated if there was any trouble while opening a cell. In a pinch you can also forego any hint of subtlety and just shoot the lock. You can find more pictures of key guns here. 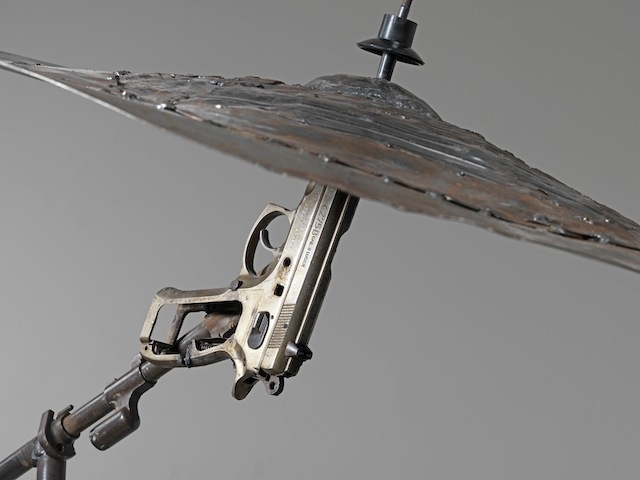 Making music with a gun probably doesn’t seem so outlandish. That is likely because you’re picturing a musical instrument that just happens to look like a gun (see above).

That would be far to obvious and not really keeping with the spirit of using an actual gun to do the job. Instead I found Jim Huish who takes the takes the idea of musical firearms as literally as possible. Combining rhythmic “tapping and racking” with vocals and some old fashion firepower, Huish covers popular songs while shooting. The result is surprisingly enjoyable, maybe Samurai Punk can book him for the soundtrack. You can find more of Huish’s work on the iTunes store.

The American Dream will be released in 2017 on major VR platforms. The game isn’t overly concerned with realistic gun safety, but it makes sense that they had to go as overboard as possible with the “all your everyday needs are solved with guns” premise. How else would American’s know it was meant to be satire?