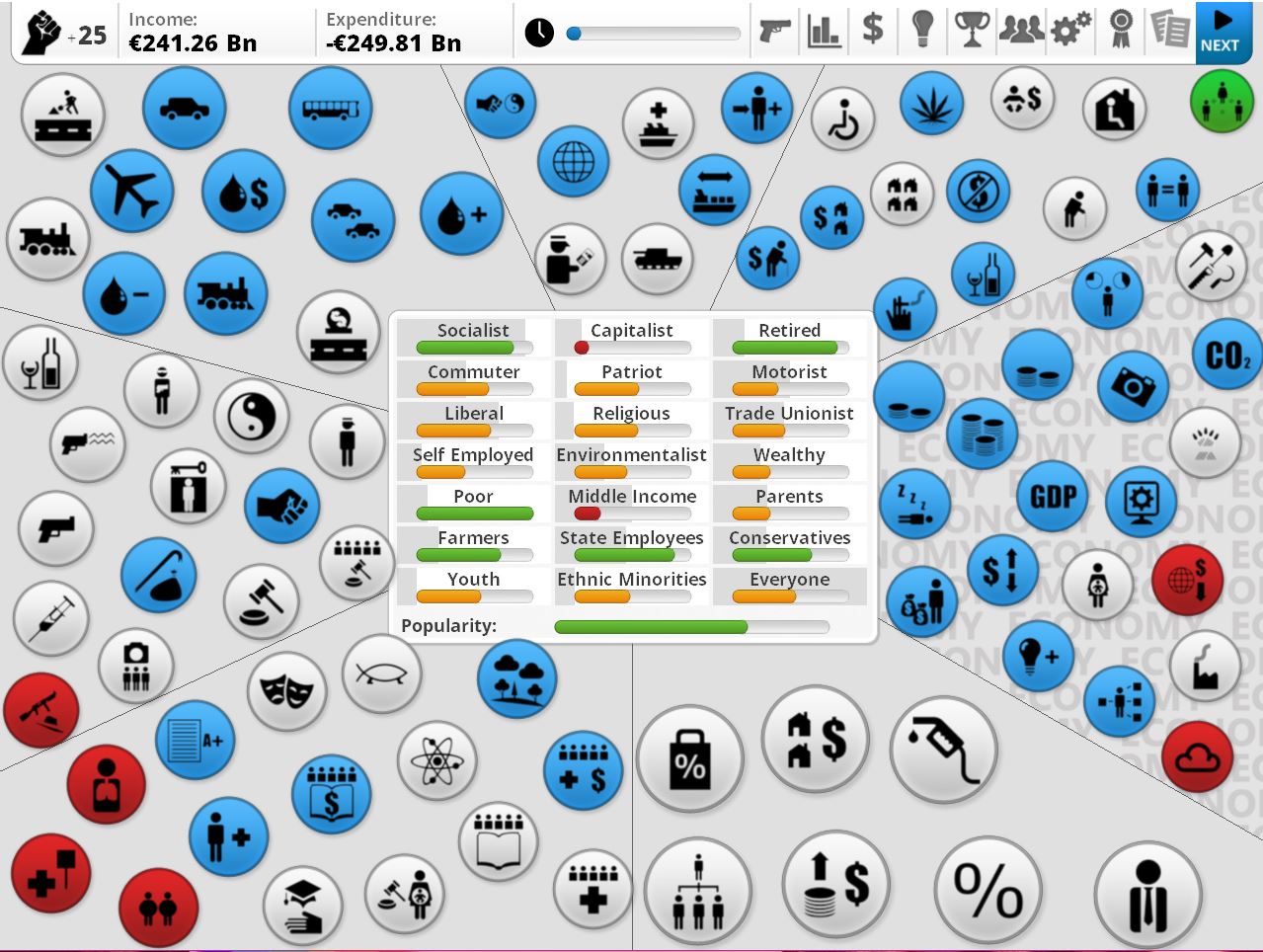 I purchased Democracy 3 on Steam in June 2014 after watching Sips play the game on YouTube and feeling incredibly frustrated with how he played the game. Everything was dandy. My first seven hours into the game were fantastic. During hour eight, however, I noticed the connections below when hovering over the “Maternity Leave” bubble in the game.

The game treats a maternity leave policy as having a negative impact on productivity! Once I saw that nasty red line, I didn’t play the game for three whole years. Maternity leave was one of the few (if not the only) policies in the game specifically about women in the game, and of course, it hurts the economy. There’s no policy regarding reproductive health except abortion, and naturally, the religious hate it. Interestingly, women isn’t even one of the demographics you have to consider in the Democracy 3, but I digress.

It wasn’t until I pitched this article idea earlier this month that I picked up the game again. Within those three years, I even bought DLC for game, but I had a hard time coming around. Treating maternity leave as a negative on overall economic productivity is short-sighted at best and wrong on how the policy works at its worst.

Maternity Leave as a Negative is Short-Sighted

Viewing maternal leave as a negative on productivity only looks at the four to 12 weeks the mother is away from her job. It doesn’t consider how paid maternal leave keeps women in the workforce who may otherwise take an extended absence from the workforce to fulfill childcare responsibilities. Paid maternal leave also allows women to take time off when they wouldn’t take the time off if the leave was unpaid. Those women, who are often lower-income women or women of color, are more likely to work jobs where taking time off means they could lose their current job. Don’t believe me? Recent research out of the University of Virginia and Rutgers on the effects of paid leave say so. Companies who’ve implemented their own paid leave policies have seen a decrease in attrition rates.

I understand Democracy 3 is a video game and that video games sometimes simplify certain aspects of life the same way movies and television shows do. Ultimately, they are fiction and everything in those works doesn’t have to be true to real life. But the maternal leave thing really just got to me. That wasn’t how maternal leave worked. It seemed like a reflection of rhetoric arguing the policy will only cost businesses money and be too burdensome, although research has found that businesses haven’t seen a negative effect on profitability.

Granted, if none of the policies were controversial in the game then it’s not much of a game. It’s bad enough the United States is one of two countries in the world that doesn’t guarantee paid maternal leave. I didn’t need a game to remind me of the work that still needs to be done.

All this doesn’t make Democracy 3 a bad game. Democracy 3 is a great game. I’m having fun again trying to get all the accomplishments and seeing what happens when you, for example, try to create a capitalist paradise. I’d also love to give Democracy 3: Africa a try and play the game as a developing nation. There’s also the two DLCs I don’t have, Electioneering and Clones & Drones, that I still want to try as well. Especially Clones & Drones since I am doing work locally around mass surveillance.

After three years, it doesn’t bother me as much as it used to. The U.S. is coming around in regards to paid maternal leave, as three states currently offer paid family leave (New York’s policy kicks in in 2018). There are bigger fish to fry, both in video games and in politics. Overall, the example illustrates the complexities of full inclusion and diversity in video games.