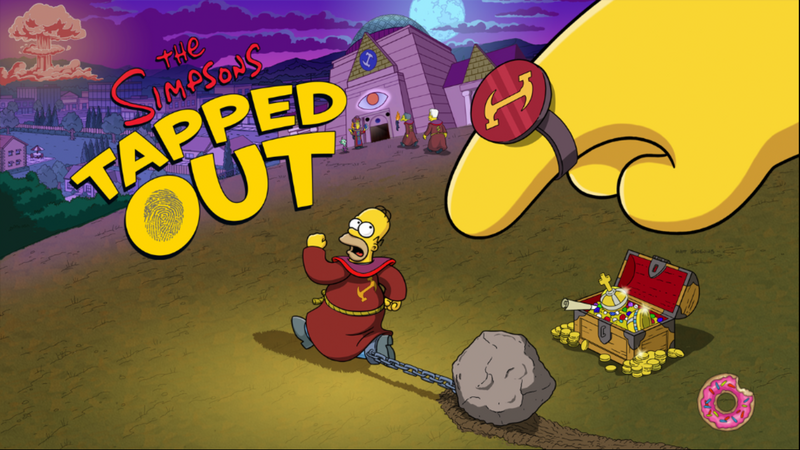 Fans of The Simpsons are no strangers to the franchise developing in uncomfortable ways. The heavy drop off in quality leading to the current show is well analysed and documented. One side effect of The Simpsons going from sitcom to merchandise franchise, seems to have been the birth of the Tapped Out style game. It’s an example of just how much money could be made from a game with so little gameplay.

Tapped Out deserves particular attention within the free to play market. It uses the humour and nostalgia for the classic episodes of the Simpsons to sell something completely at odds with the satire that made the show beloved.

The game takes characters’ dialogue and jokes from the show as its starting point. The characters usually draw more heavily from the classic seasons, playing into fans nostalgia. It’s level 38 before you’re rewarded with a character from later seasons.

Tapped Out has dragged itself through 6 years with constant content. It’s still mining the golden years before going towards the endless pot of modern content.

This over-reliance on the first ten years of the Simpson’s history shows that EA are well aware which elements of the Simpsons actually drives fans to play the games.  You couldn’t make the same amount of money by selling characters exclusively from Lisa Goes Gaga. This isn’t wrong as of itself, of course you’d rather focus on the positives of the franchise. Once its combined with the lazy game it becomes clear its mining good will from the show, in a way that directly contradicts the spirit of the series.

Simpsons video games have always been a mixed bag, with some highlights. Few of them match the quality of the series, but most have some gameplay. Tapped Out has neither. Its gameplay is essentially just sitting and waiting, while clicking through quotes and references to episodes you previously enjoyed. It’s the sort of product that can only exist in a late capitalist society.

The jokes used in every opportunity in Tapped Out often contradict the hollowness of the game. The Simpsons constantly hit back at Fox’s attempts to make it into a money printing franchise. The idea that the show was anything more than a sitcom was a punching bag for The Simpsons.

The hollowing out and exploiting of its own past is something the modern show does an awful lot of. Usually for something quite cheap. Extract money from consumers using nostalgia and gambling strategies use… well that’s Mr Burn’s level of evil.

What is Left of a Legacy?

Tapped Out runs directly against what the legacy of the proper Simpsons was. It does so by parcelling up bites of nostalgia and using it to sell you donuts. Remember the surprisingly affable Bond Villain Hank Scorpio? Yeah, you’ll an equivalent of Itchy and Scratchy Land dollars to see him.

Itchy and Scratchy Land features the use of a false currency, only useable in ridiculously specialist ways. It’s a trick so stupid, only Homer falls for it. EA uses quotes from this episode to sell you more of it’s digital currency. It’s then only redeemable for digital icons of characters and access to more quotes. Then you can make them set a timer before you can click on them again.

Tapped Out‘s gameplay is empty and repetitive; its borderline non-existent mechanics existing only to sell you small digital pictures, with a quote you remember attached. However, It’s built on a solid foundation of exploiting what made the Simpsons great in the first place. It makes it a particularly great example of late Capitalism beginning to eat itself.