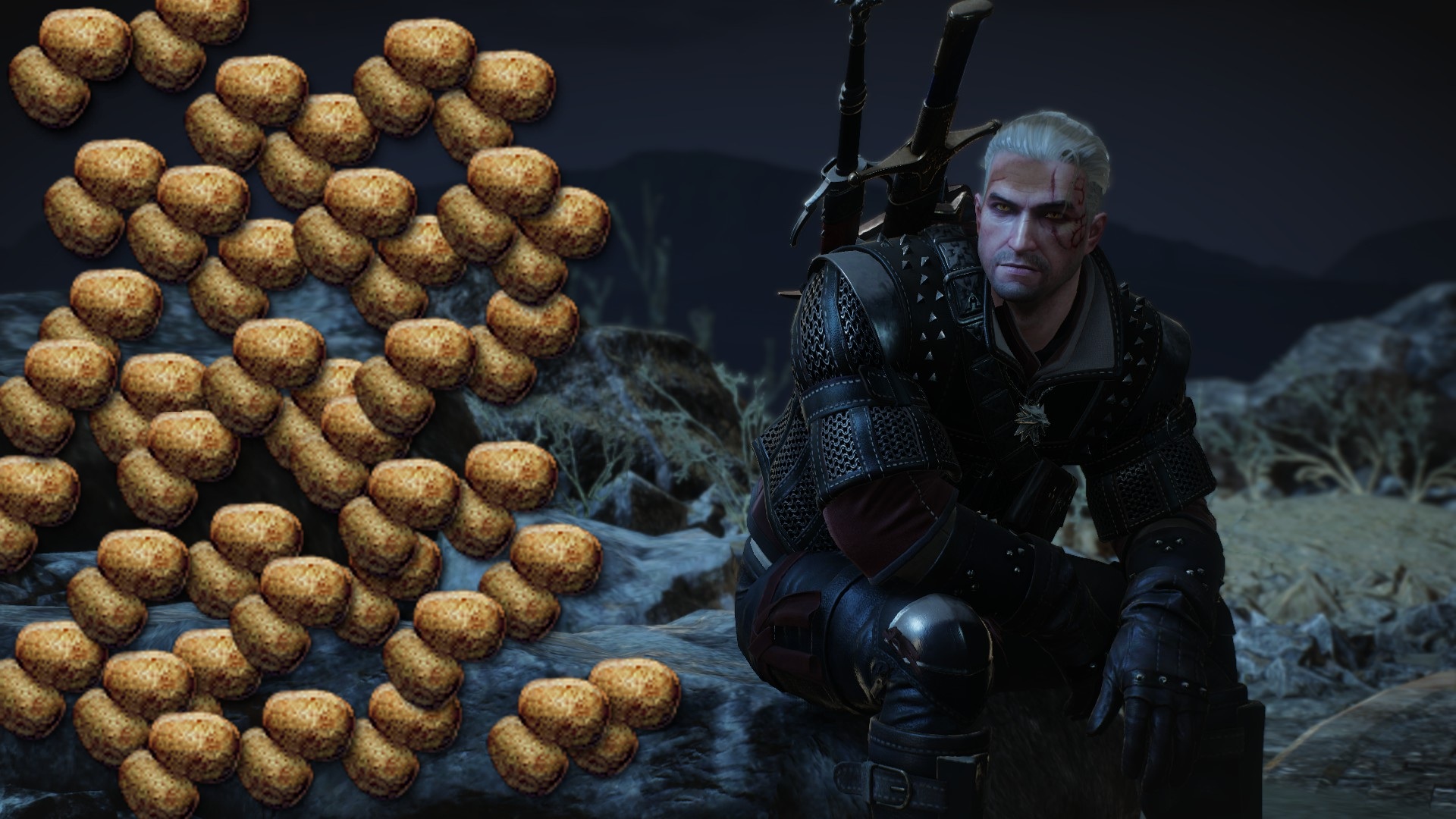 Fantasy RPG’s can take us to worlds we could only ever imagine. Worlds where dragons freely roam the skies and all the spooky monsters of lore actually exist. The only worlds that, even now, remain out of our reach are those with true diversity. Why is this still so difficult?

Historically, people of color, those of races and ethnicity that fall outside of the white spectrum, are underrepresented in video games. This is despite the fact that, amazingly, not all gamers are white men.

I can hear people rolling their eyes from here. Yes, we talking about diversity again because it’s important to talk about these things. Ignoring this issue is what allows games like, The Witcher 3 to be released without a single non-white character or NPC. In a game that features prominent racial narrative in how Elves and Dwarfs are treated, doesn’t it feel weird to not have even a little diversity in skin tones? Unsurprisingly, people get a little uptight when you ask about this. 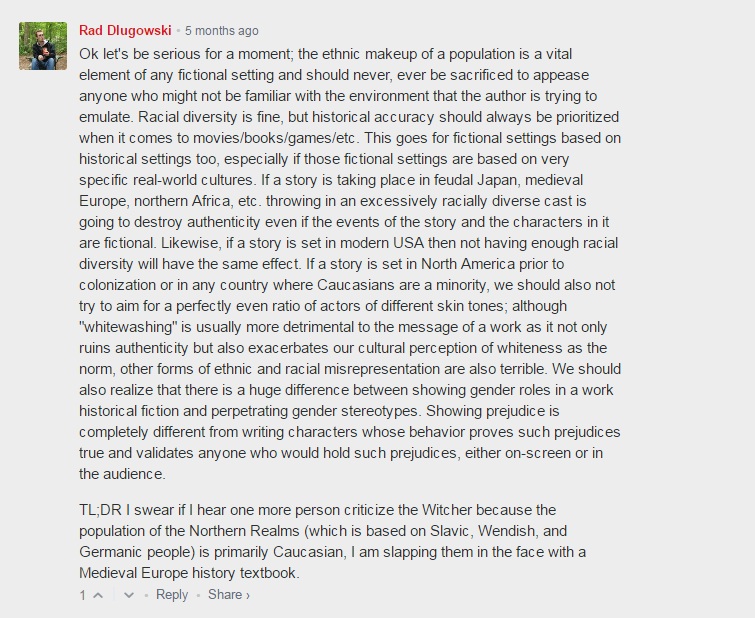 Basically, the gist of this wall of text is thus, historical accuracy is hugely important in establishing lore. Even fictional settings with a hint of specific real-world cultures, must be considered authentic and preserved. There’s nothing wrong with diversity, as long as it doesn’t challenge any preconceived notions.

Since The Witcher 3 depicts a fictional medieval Poland based on mostly Slavic lore, the population should be largely Caucasian. After-all, lots of white folks live in northern and central Europe. Sometimes if we’re really lucky, proponents of this argument will share real-world statistics to back up their claim. Oddly, they don’t jump to share statistics for the number of ghouls and drowners running rampant in each region. Evidently, fantasy can only encompass so much. Entirely new and imaginary creatures, fine. Black folks who’ve traveled to predominately white countries? Hell no.

The trouble with this argument is that it entirely hinges on the premise that, fantasy elements aside, The Witcher 3 is a historically accurate portrayal of Medieval Poland. Except, it’s not. Twitter user, Díacolleté recently dropped some inconvenient truth bombs that have some “history buffs” in an uproar. 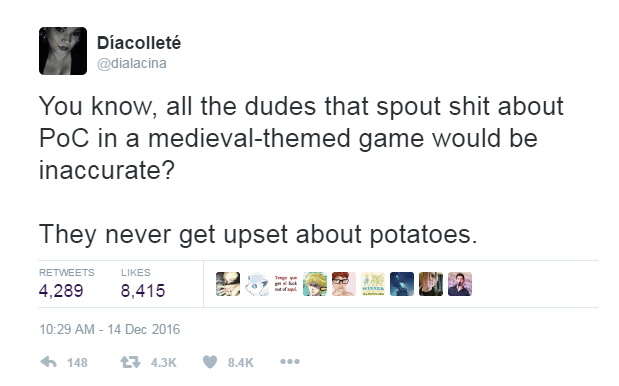 You see, while the potato is widely popular in Poland today, everyone’s favorite tuber didn’t fully integrate itself in Europe until the end of the 16th century. 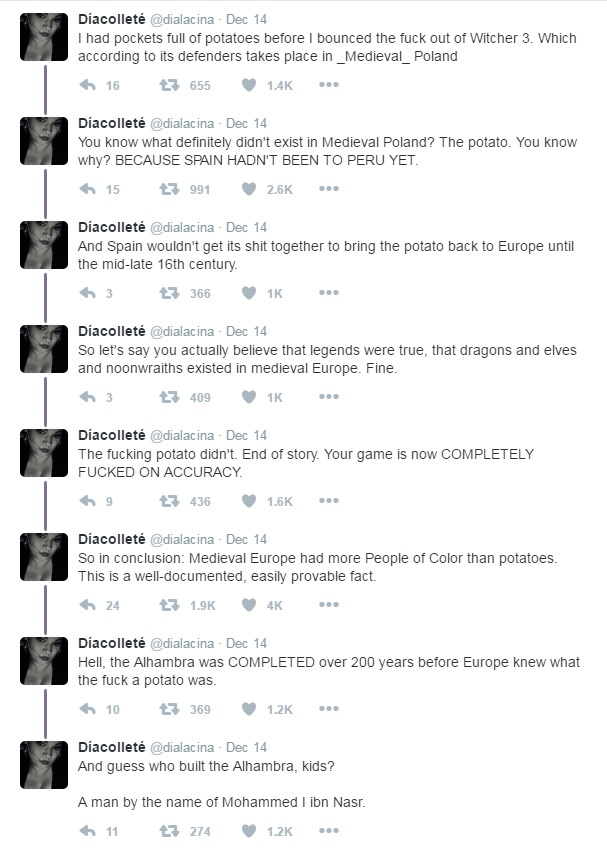 Naturally, once this over-sight was brought to everyone’s attention, Twitter collectively got together and had an educated discussion on diversity in gaming. Just kidding, people totally lost their shit.

What Did The Witcher Ever Do To You?

Suddenly, it wasn’t as much a matter of historical European accuracy, as just an overall “realistic gritty medieval” fantasy being preserved. Some fans went so far as to point out that The Witcher 3 likely doesn’t take place on our version of Earth, and as such allows for more creative liberties. Fair enough argument, that completely misses the point. Fortunately, Miss Díacolleté was kind enough to elaborate further.

With the internet so quick to shoot down any criticism of a beloved gaming series, often even perfectly reasonable criticism gets tossed aside. This argument was never about The Witcher 3. It was never about calling CD Projekt Red out for not including black people. What it has always been about is pointing out how people of color are forgotten or brushed aside in popular media.

This argument, much like this article, isn’t about attacking a game and demanding the developer tack on diversity to appease a minority quota. It’s about reminding developers that people of color exist even when they are easy to overlook. It’s about a segment of the population who support games and want to see themselves represented in them. Even those that take place in a magical fantasy setting.

Honestly, I don’t believe CD Projekt Red had any malicious intention of excluding people when they released The Witcher 3. It probably just didn’t occur to them to include a more racially diverse cast at the time. An oversight they have since corrected with the addition of DLC.

If It Doesn’t Matter To You, It Still Probably Matters

That’s why we keep having this same discussion over and over. Contrary to popular belief it isn’t because a handful of cry-baby progressives always have to have something to complain about. It’s because in an industry dominated by white males, it’s easy to overlook things like racial and gender diversity. Things that a vocal segment of the community insist they don’t care about, yet still rise up with virulence when anyone dares ask about it.

This isn’t a problem that just goes away because a one game gets a playable black protagonist. It’s an issue that we in the gaming community have to address and readdress until it’s no longer an afterthought. If after reading this you still feel compelled to go out of your way to insist that diversity has no place in fantasy games, maybe, just maybe it’s time to admit historical accuracy isn’t your real problem.