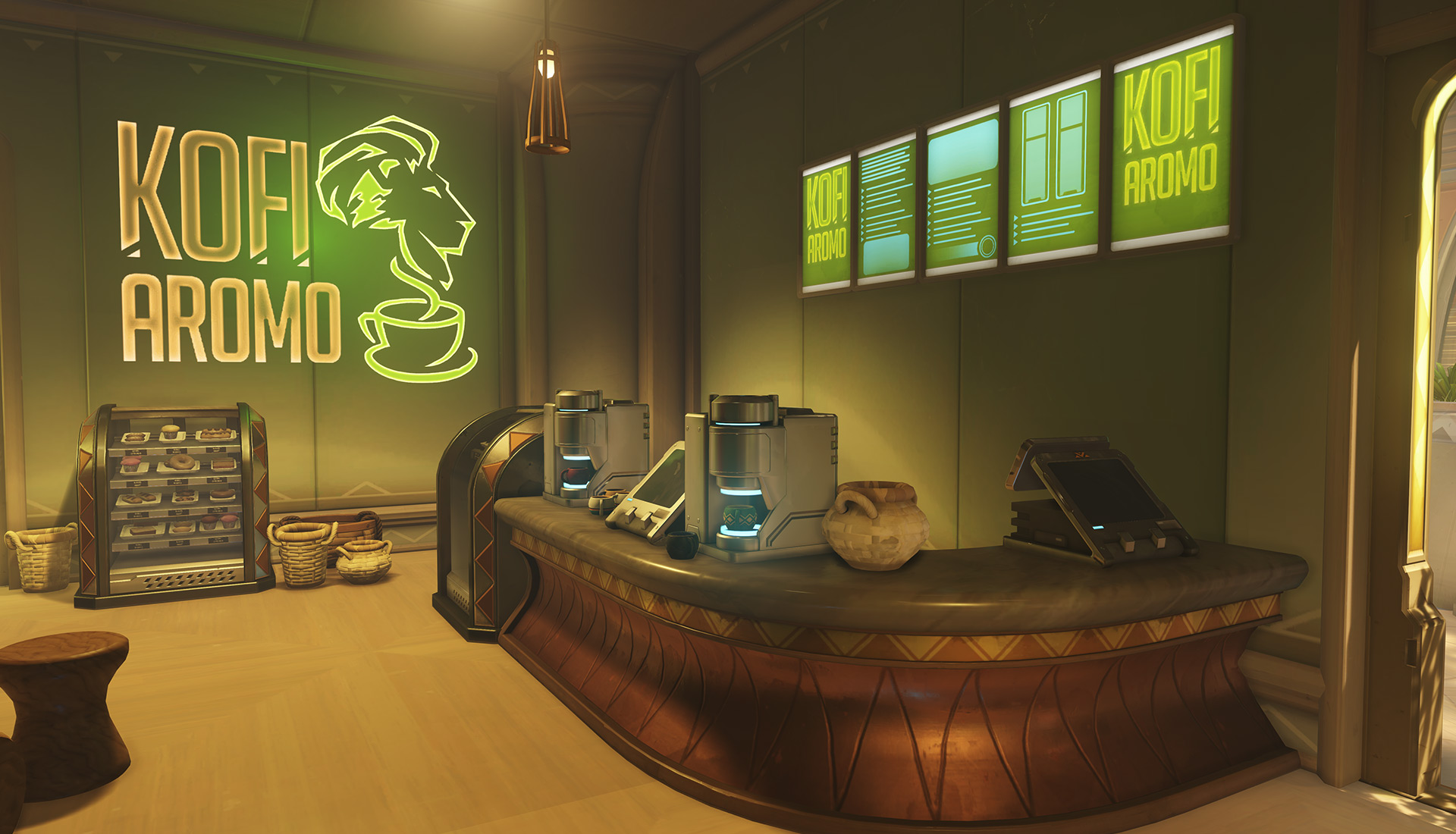 On May 24, Overwatch celebrates its first anniversary. And it’s been a hell of a year. The game has been front and centre in major industry talking points without pause: sexualisation, diversity, harassment, fan culture, Doing It Right™ versus getting away with its continued failures, and, of course, a deluge of memes. In short, Overwatch has been, and will undoubtedly continue to be, a microcosm for the wider industry and culture that bore it.

Of course, while the game launched a year ago, its impact did not. When it was announced at BlizzCon 2014, the built in fan base that came with Blizzard’s popularity were hyped. The wheels of Overwatch’s influence were already in motion.

As were the wheels of discourse. At that same BlizzCon, Blizzard’s Senior Vice President of Story and Franchise Development Chris Metzen announced that they intended Overwatch to be welcoming to “Boys and girls—everybody.” Metzen discussed how his daughter had questioned the “swimsuit” attire of various World of Warcraft characters and how Overwatch was intended to do better.

People were rightly skeptical. At this point the five female heroes (of twelve total) were all unequivocally slim and conventionally attractive. Plus, whilst Pharah has her heavily armoured flight suit, the others – particularly Widowmaker – weren’t doing much better than Warcraft’s “swimsuits.” 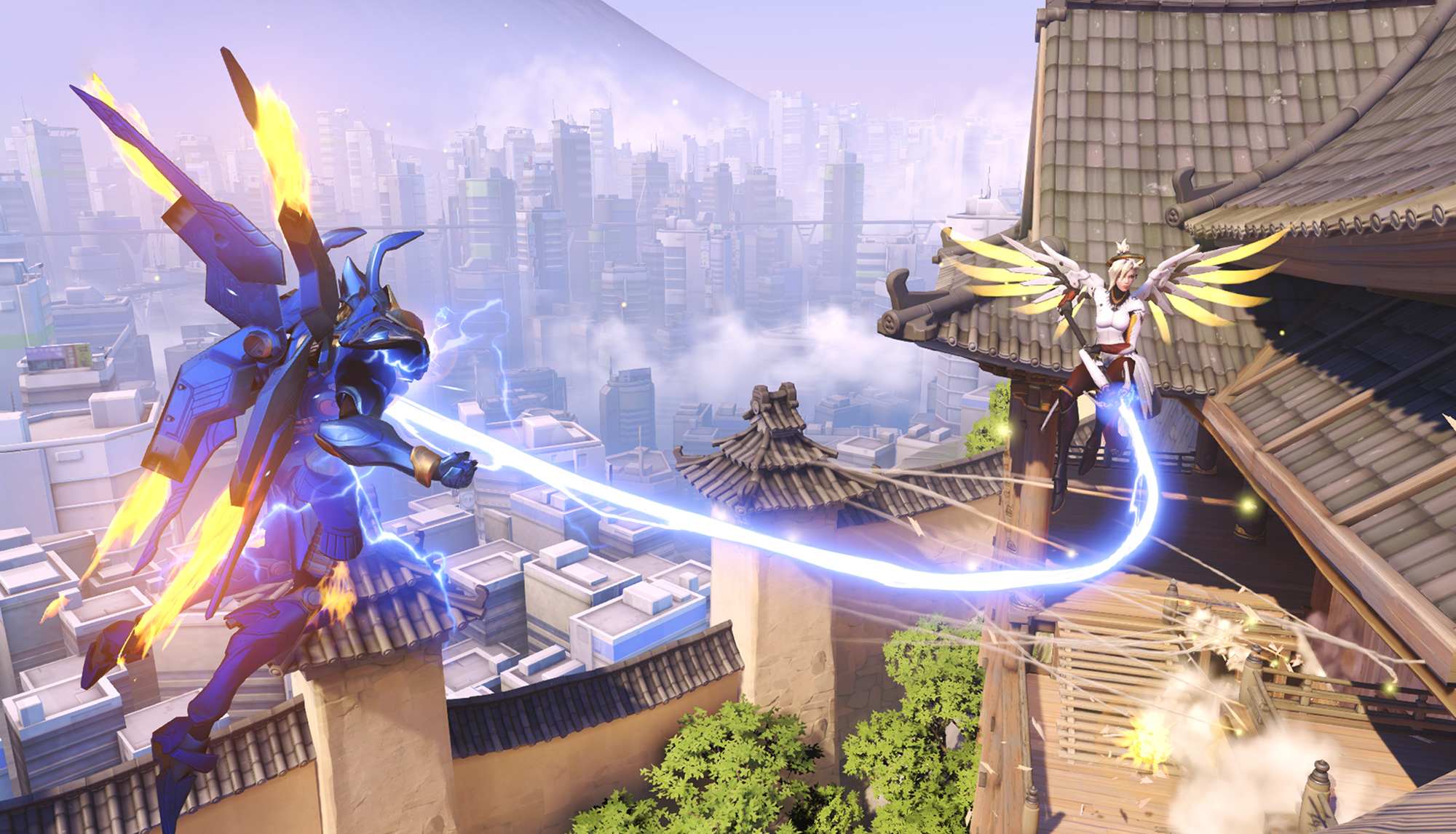 And one more thing had begun: shipping. Fans – specifically queer female fans – watched Tracer and Widowmaker throw down in the earliest cinematic and asked that age old question: what if, instead, they kissed?

More information about the game trickled out as the game’s release approached. Blizzard revealed a suite of new characters, including women with slight variations on the silhouettes of the prior five. First D.Va, whilst still svelte and wearing a skin tight suit that adhered impossibly to her breasts, at least spent most of her time in a giant pink mech. Then Mei, a chubby woman wearing a thick coat, though how much of her shape is attributable to each factor is a continuing debate.

Finally, Zarya was unveiled, and she was, in a word, buff. With her reveal, Blizzard took care to specifically draw attention to the fact that they were “listening and…trying hard” to have “diversity in different body types.” 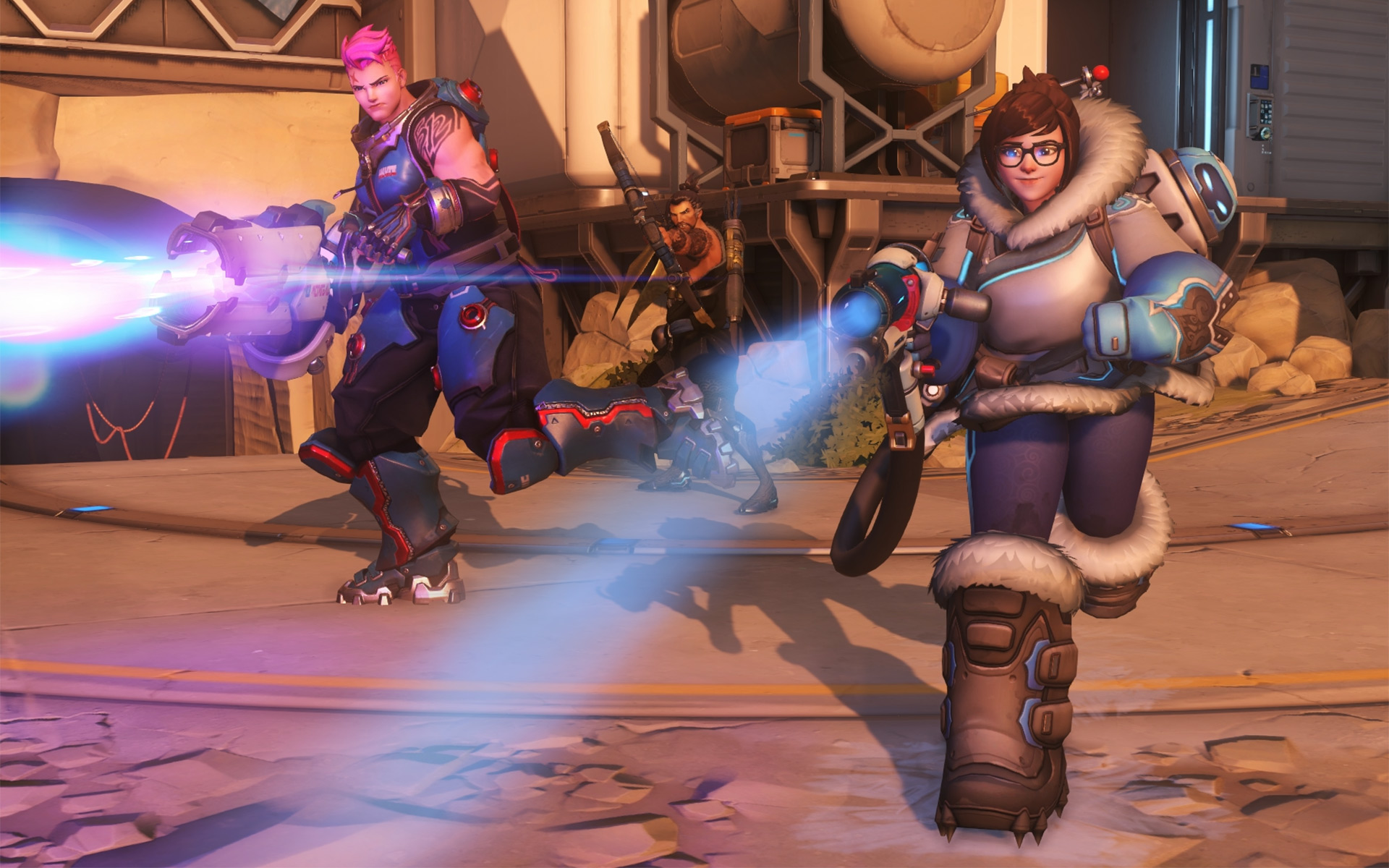 And with that, the launch lineup was complete. Debates, on the other hand, were just getting started.

On one hand, it was difficult to argue that Overwatch presented one of the most diverse rosters available. But that bar wasn’t exactly high. Blizzard’s offering was most commonly compared to Team Fortress 2, which doesn’t even offer playable female characters.

And yes, Blizzard had shown a willingness to listen with Zarya, but they had also produced eight female characters (of 21 in total) with the vast majority being slim and/or sexualised. When compared to the vast dichotomies of the male heroes, who were allowed to be stout (Torbjörn), fat (Roadhog), grimy (Junkrat), or even non-human (Winston), the eight women were clearly not allowed to fall outside narrow parameters of what is generally considered to be attractive. Did it matter that they were doing female characters better if it was still so meagre?

First, Blizzard patched out some environmental storytelling that implied that Symmetra was jerk off material, canonically, to other characters in the game. Then they did the same for a victory pose that showed off Tracer’s impossible wedgie.

People were furious. How dare Blizzard “censor themselves”? How could they cave to “SJW pressure”? Others were confused: Blizzard had merely listened to a comment from the beta that was intended to receive player feedback.

Blizzard, for their part, played both sides in a way that has ultimately become characteristic. At first, director Jeff Kaplan said that they had removed it to prevent anyone feeling “uncomfortable, under-appreciated or misrepresented.” “We’ll try to do better,” he said, leaving in an almost identical victory pose for Widowmaker and replacing the removed pose with one cribbed from a vintage pin up girl poster that “[spoke] more to the character of Tracer.”

Regardless, Tracer was no less popular among fans. And the second animated short sent shippers into overdrive with a tease that she had known Widowmaker before she was brainwashed into becoming an assassin. 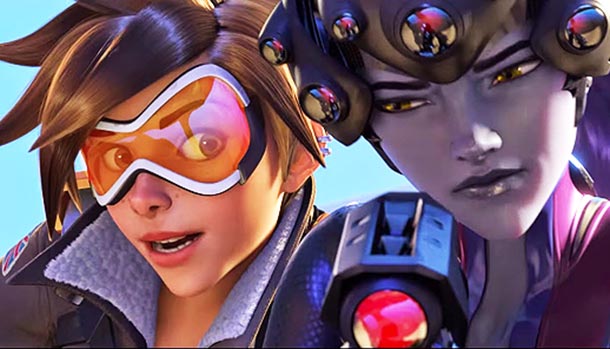 At this point, there was only one thing that could intensify all of these different threads.

With the full game in front of them, fans could start picking into the details. There was some good news, like Tracer’s punk and Widomaker’s huntress skins as less sexualised options – and then there was the cultural appropriation. Overwatch includes a handful of heroes of colour – it isn’t often that you get an Indian, Egyptian, or Brazilian character in any game, let alone all in the same one – yet many of the legendary skins are garish caricatures of marginalised cultures. And Blizzard only dug their heels in when criticised – at one point Kaplan even said that Pharah’s Raindancer skin was his favourite.

So too began the harassment. Yes, towards everyone (as if that somehow makes it better), but in particular women and people of colour, like Geguri, a 17 year old Korean woman who caused two pros to quit after she proved that she wasn’t hacking but was in fact just that good at the game.

Yet Overwatch’s marginalised fan base thrived. With in game interactions to supplement the other lore, a thousand ships sailed. Blizzard were coy, promising that there were “multiple” LGBT+ heroes but not making any announcements. Fans filled in the gaps with their own imagined representation, as I wrote about in August of last year.

And Overwatch characters became icons against real world oppression. First Zarya became a gay icon despite the homophobia of her current home government in Russia, and then D.Va became a symbol of feminism in Korean gaming circles.

In some areas, Blizzard continued to improve. In their first year they have released three new characters: an aged Egyptian mother, a brilliant Latina hacker, and a robot built by a child prodigy. Ana and Sombra are both unsexualised women of colour and, whilst they are both thin, Orisa, being a centuar robot, falls far outside the parameters of the silhouette Blizzard had previously forced female heroes to adhere to. And, alongside Afrofuturist Orisa, the Oasis map, set in Iraq, demonstrates an imagination of the future that explicitly celebrates areas of the world that are all too often overlooked or disparaged by other media, especially games. 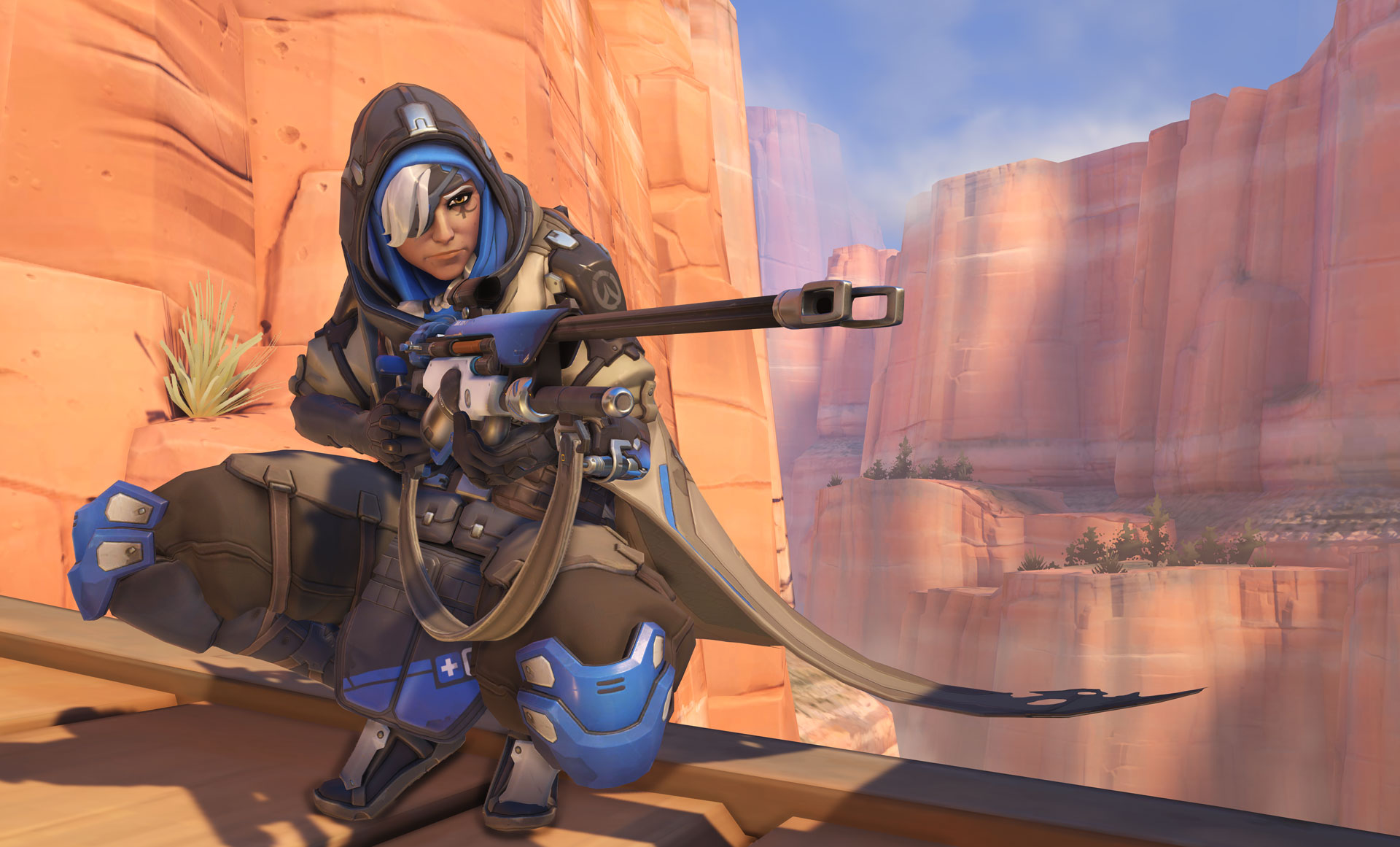 Yet in other areas, Blizzard remains stagnant. Despite two overhauls to the report system, Overwatch continues to be plagued with toxicity. As I wrote recently, one pro’s 30 seconds of screaming slurs isn’t an isolated incident; it’s a fundamental problem with the game (and yes, most online games – as I said, Overwatch is a microcosm). Filtering gg ez was funny, but now serves to look a little silly as an acknowledgement that the chat system so often sucks and, aside from this essentially useless change, has been left to fester since launch.

The game’s events have been characteristically mixed bags when it comes to Blizzard’s professed desire to be inclusive. Halloween, for example, brought Mercy’s sexualised witch skin and the whitewashing of characters like Symmetra. Year of the Rooster gave us D.Va’s excellent palanquin skin, in which she wears a traditional Korean hanbok. It also attempted to bring Mei out of her puffy coat and straight up broke her in the process. Uprising finally gave us a Mercy skin without a boob plate, but also presented…whatever that Widowmaker skin was.

It was, though, the Winter Wonderland event that brought the most talk. Not because of the in-game event itself, but because of a tie in comic, Reflections, that finally revealed that Tracer is gay. Remember how I was talking about queer fandom carving out their own space earlier? Well, suffice to say they were thrilled.

And with good reason. We’re still waiting on the “multiple” characters Blizzard have promised us, but having their first announcement be that the face of Overwatch is a lesbian – a happy lesbian in a good relationship – was joy inducing for a community who are used to meagre scraps in any media, not just video games.

Sure, it wasn’t the be all and end all of queer representation. But it is pretty great that you can’t look at Overwatch – not its packaging nor its advertising nor the game itself – without seeing a lesbian being celebrated. The game almost universally accepted as 2016’s game of the year, fronted by a woman who lives happily with her adorable girlfriend. The character used to introduce the game way back in 2014. She’s gay.

I could go on. Suffice it to say this was easily the high point in Overwatch’s history for many, myself included.

There’s little chance Overwatch will slow down during its second year, so now is a good time to reflect.

Firstly, discourse never dies. Overwatch is an intense case study because of its wild popularity, and it’s popular in a different way than other games are. People don’t just want to play it. Fans are engrossed in its wider universe and want to be a part of it, whether that be through fanart, fanfiction, forum posts, memes, or in depth analyses of the game’s many problems and successes.

And while Blizzard lauds themselves for “challenging stereotypes” and championing inclusivity, they have a long way to go. Only this week were they hastily attempting to retcon Pharah’s appropriative skins. Dia Lacina eloquently points out the problems with this, as well as with blindly cheering any of the representation in the game.

I continue to be over the moon that Tracer is a lesbian. Nothing will take away from the pure expression of joy that I watched unfold and experienced myself when her sexuality became canon. But I fully agree with Dia’s assessment of her: Blizzard capitalised on the work of queer fans who had adopted her because it required little effort on their part and made them money.

It’s still important. Young queer women still get to see themselves as a hero. But it’s not simple. When it comes to Overwatch, not much is.

So it’s important to continue to hold Blizzard’s feet to the fire. If they want to capitalise on diversity, we need to hold them accountable for their failures. And hey, if they really want to listen and improve, as they claim to, then they should encourage it.

Overwatch’s second year will no doubt have highs and lows and endless controversies of its own. We know there will be new heroes, maps, and events, but not exactly what they’ll bring.

But we know everyone will be talking about them when they arrive.