Home Read Habbo Hotel Taught Me How to Be Gay 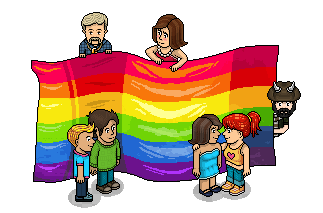 Habbo Hotel is an MMO social game that was first launched in 2000 by the Finnish video game company Sulake.  Habbo was originally just created as a virtual chat room that was later then converted into a game. The gameplay of Habbo Hotel is centered around players exploring the hotel, creating their own rooms, collecting items and furniture (furni), playing minigames, and socializing with other players. As stated by the developers, Habbo is a lot of things and the experience of the player is heavily determined by what kind of player they are. Based on the confines of the mechanics described the players really bend the game’s structure to their will. Player’s create their own companies, create complex trading economies, and have intricate Harry Potter roleplaying.

I was a heavy player of Habbo Hotel from the years 2007-2011, so from when I was 12 to 16. During that time period I was their target audience: a late pre-teen to early teen. Early on in my experience with the game I engaged with it in the ways that it was specifically designed. I built rooms, I played the mini games, and I lightly interacted with other players creating some loose friendships. I the way I played the game evolved in a way that was somewhat mirroring my pubescent non-virtual life.

In the real world of 8th grade and Middle School I was quickly coming to the realization that I was a queer woman and I had nobody in my life I was able to share these scary revelations with. But I was an active player of Habbo Hotel. One of the most popular destinations in the game was a room called the “LGBT Wonderland”. This was a room within the game that was a safe space for the LGBT youth who played within the Hotel. The LGBT Wonderland was not a room that was created by an employee of Habbo Hotel, but rather a player who felt like a space like this was necessary. The creation of this room is very similar to the World of Warcraft guild The Others as detailed in “Play as Transgression: An Ethnographic Approach to Queer Game Culture” by Jenny Sunden.

In “Play as Transgression” Sunden details why, “The feeling of entering the guild was one of relief and happiness. It was a feeling of relief related to no longer having to worry about covering up bits of your life that would not fit in, or would even be regarded as ‘inappropriate’ in the game environment.”  Sunden was tired of playing in guilds that were mostly dominated by straight cis males and found herself struggling to connect and be respected by her fellow guild members. Sunden found The Other’s guild through controversy with Sara Andrews, a player who was being threatened with a possible ban by Blizzard for advertising her LGBT guild on the Blizzard forums. Blizzard at the time had a strict “don’t ask, don’t tell” policy in order to protect players that were members of the LGBT community from being harassed in game. Andrews would go on to win a case against Blizzard to get them to dismantle this rule.

In the paper Sunden goes on to talk about how The Others goes against the “intended” way to play the game and defines this as transgressive play. In defining transgressive play Sunden defines it as the following:  “Play against the ‘ideal’ or ‘implied’ player of the game, of playing the game and bending the rules in ways not anticipated by design. Transgressive play is play as innovation and, possibly, subversion, of finding, exploring and exploiting loopholes in the game fabric”. So transgressive play is interacting with a game in a way that is different than the intended by the game designer. World of Warcraft is a AAA game that is designed by straight men for the play and enjoyment of straight men. In this passage Sunden goes on to describe that even being a player that is anything but the targeted demographic in and of itself is transgressive play.

Sunden describes her experience finding the guild as follows:  “Coming to the guild – with the previous experience of playing in more mainstream guilds – felt a bit like coming home, even if ‘home’ in queer circles may be ambivalent. Sexuality functions as a tie that binds people together (people who may otherwise have had little in common)” The intended purpose of guilds within the game was just to allow for the organization of raids to be easier. The formation of these gay guilds in WoW seem similar to the importance of the “gay bar” in American Queer identity. Bars and guilds were established as pivotal points of interaction and then marginalized communities adapted these formats to fit their own needs. Being the center of queer interaction was not the intended purpose of either of these places or groups, but became very central to the formation of people’s identities and finding community.

This brings us back to LGBT Wonderland, which was very different from the Habbo I was used to. The people in the room would openly share intimate details of their lives with the entire room, talking proudly about subjects nobody my age would dare speak of. People in this room even looked different than people in the rest of the hotel.  Your avatar in Habbo Hotel, as in most other MMO’s, is the most direct way you express who you are to other players. In the LGBT Wonderland many of the girl avatars had short hair and wore hoodies,  many of the boy avatars had bold hair choices and wore tank tops, and many people across all genders had crazy hair colors. It was a diverse and eclectic group and it first made me too nervous to even talk.

Over time I was accepted, with these people in this online game were the first I ever came out to. What’s specifically intriguing about the LGBT community inside Habbo Hotel in contrast to the ones described within World of Warcraft is the age difference. In Sunden’s guild it seemed everyone was an adult who had already accepted their sexuality and was comfortable in it. But since the demographics of Habbo Hotel skews so much younger, the queer community within the game is one of kids who are still in the closet and discovering who they are. Though that obviously wasn’t the intention behind Habbo Hotel, the players who created a community within these queer spaces are transgressing the assumed demographics and use of the game and its repurposing for themselves.

How do the developers of Habbo Hotel react to the queer transgression? Since Habbo is a kids game it has an in-game word filter to censor any profanity a player may say. Of course standard cuss words are filtered by the system, but so are words such as lesbian and gay. In a game that has such a vibrant and open LGBT community words that are labels that one can use and identify with are automatically banned. Players are given the option to turn off the filter, so the LGBT community can still openly talk about their lives and naughty thirteen year olds can type ‘fuck’ to their hearts content.

It seems strange that curse words and personal identifiers in this game are put on the same level. It seems clear the logic behind the decision is similar to the thinking of the World of Warcraft “don’t ask, don’t tell policy”. Calling somebody gay or a lesbian is seen as an insult and often thrown around by bullies hoping to get a rise out of somebody or hurt their feelings. 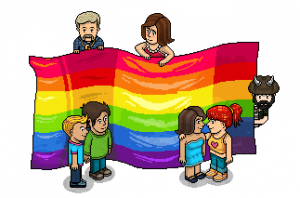 Though I haven’t played Habbo Hotel since I was sixteen years old, I did check back in with my old account to do a bit of research for this article. I was very happy to see that the LGBT Wonderland still exists, though under a different owner than in my time, and is still one of the most popular rooms in the game. I also found a recent forum post on a Habbo fan forum called “Habbo Quests” where they talk about the room. The following quotes are statements from the forum.

“Yep I’m in there quite often and I can vouch! Most of the time bigots chant and spam disgusting homophobia and/or transphobia. My initial response is to report them because the LGBT room is supposed to be a fun and expressive room where Habbos can go and meet people without any hassle.”

“Although I report those people who are saying just inappropriate nonsense in the room, Habbo doesn’t do much about it.”

These online communities for LGBT youth were an important place for me to learn to understand myself as I was growing up and I am glad to see that they continue to be important to the children and teens of today. Though I am happy these communities are still flourishing, I look forward to the day when online games such as Habbo Hotel won’t ostracize players that different than the ones they had in mind as their target audience or even better develop the game in the future with marginalized groups such as the LGBT community in mind.