Spider-Man has had a such huge impact in the half a week its been out, its inspired pretty much every hot take going. Many of these have upset one side of the spectrum or the other. Quite a few have been ridiculous, like discussion over the World trade Centre Tribute or the absent Trump Tower. Others are a little more grounded, but still strange; like the public airing of one couple’s break-up. It’s also recently ignited something of a debate on the role of police, and the way comic books games portray them.

Spider-Man is a friend of cops in the game. He loves them like a five year old whose been given a tiny patrol car for Christmas does. He works directly with them and takes their lead on everything. Ending every crime-stopping with actually calling them rather than just handing out justice by way of his fists. This hasn’t sat well with everyone given the current reputation of the NYPD. It’s not necessarily a problem that Spider-Man loves the NYPD.

Games should work to accurately portray social issues. However, mainstream superhero media has rarely been the place for nuanced debate over the role of law and order. Spider-Man is a wise-cracking but naïve kid. It’s part of what makes the character so well liked. He’s not like Batman, violently beating everyone he runs into. To make him a ‘friendly neighbourhood Spider-Man’, he has to be working within the legal system of justice more other brooding vigilantes.

Superhero Media is Not Reality 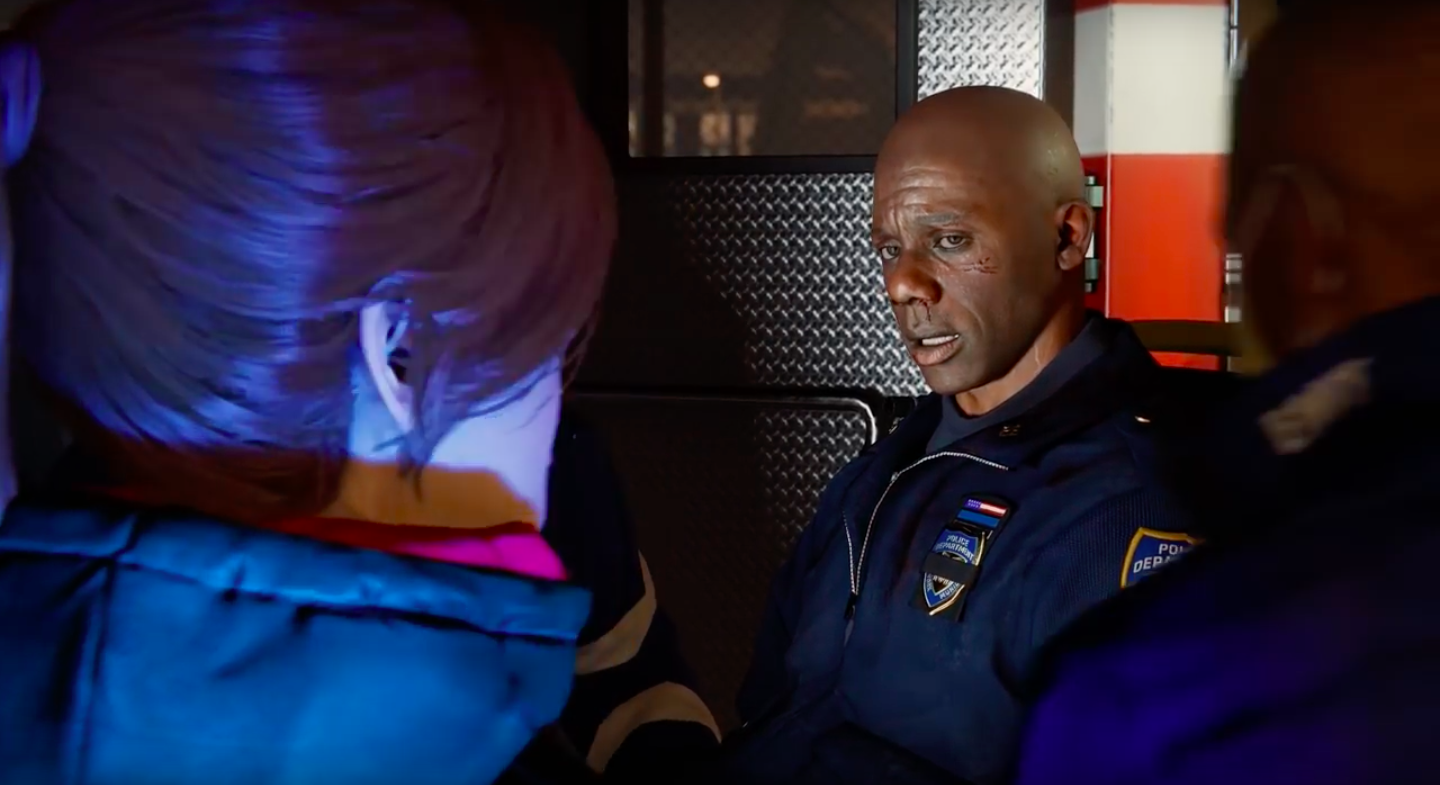 The game doesn’t give an accurate depiction of modern policing and its institutional rottenness. It doesn’t have to. It’s a story about a kid who got bit by a radioactive spider. He now fights crime and tries to help people out. It has to have a more naïve view of the police than we’d accept from more grounded game. This is just to avoid the entire game focusing on that moral issue.

A Spider-Man title that portrayed the ongoing discrimination and abuses practised by some police offices would probably have very little time to focus on anything else. It would be an inherently different game. Maybe it’s the sort of title we need given the other options on this issue. You’d probably still end up wondering why this interesting game about the role of the police features Spider-man.

Insomniac are probably aware of how controversial their portrayal of the NYPD would be. The only cops who are given any sort of time or focus are minorities. Your main police connection is Yuri Watanabe, a NYPD captain that’s been an ally of Spider-Man in comics. Making her the main police delegate was not an accidental choice, she’s a recent addition too so her inclusion was not a given. The other major police figure is Jonathan Davies. Leaving spoilers aside, he plays an important role.

Only minority cops are given names or substantial roles. This was not accidental. While this doesn’t address the problem, it does at least take away the issue of Spider-Man working with a nearly all white police force. It’s not a perfect solution, but it is probably the best that can happen in a blockbuster Superhero game.

Spider-Man Versus the Stereotypical Triads 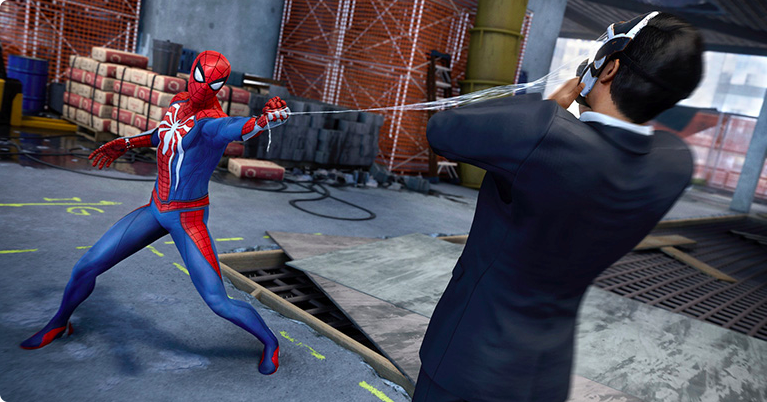 Avoiding an all white police forces within the game is important, especially when you consider what you’re up against. The first wave of attacks come from Fisk’s thugs. A triad-like gang later replaces them.

Comic book characters that harken back to Yellow Peril are still disappointingly prevalent. It’s a problem that persists and a lot of it stems from how long most titles have been running. You only have to look at how many villains have Soviet or Eastern European backgrounds to see this is still a problem. Outdated characters based on old stereotypes and fears are still common. These need updating for modern interpritations. If not the negative stereotypes just perpetuate.

Like Iron Man’s Mandarin, it’s hard to approach these outdated clichés in modern uses of the character. The cinematic version of the Mandarin side-stepped the issue entirely. In doing so it managed to upset fans who wanted a racist caricature by not using one.

Spider-Man hits up against this issue pretty hard. The gangs are classical Asian triads. It’s not the games finest moment. If any part of Spider-Man deserves to be called out for it’s depiction of society, it’s this. Not depicting police brutality in a super-hero game is not as big of a problem as continuing to depict criminals in racially charged ways. The game has some positive depictions of Asian characters, like Yuri the police Captain. It still really wouldn’t have hurt to not refer to the Demon Gang in such culturally charged terms.

The World’s Most Public in-Game Break-Up 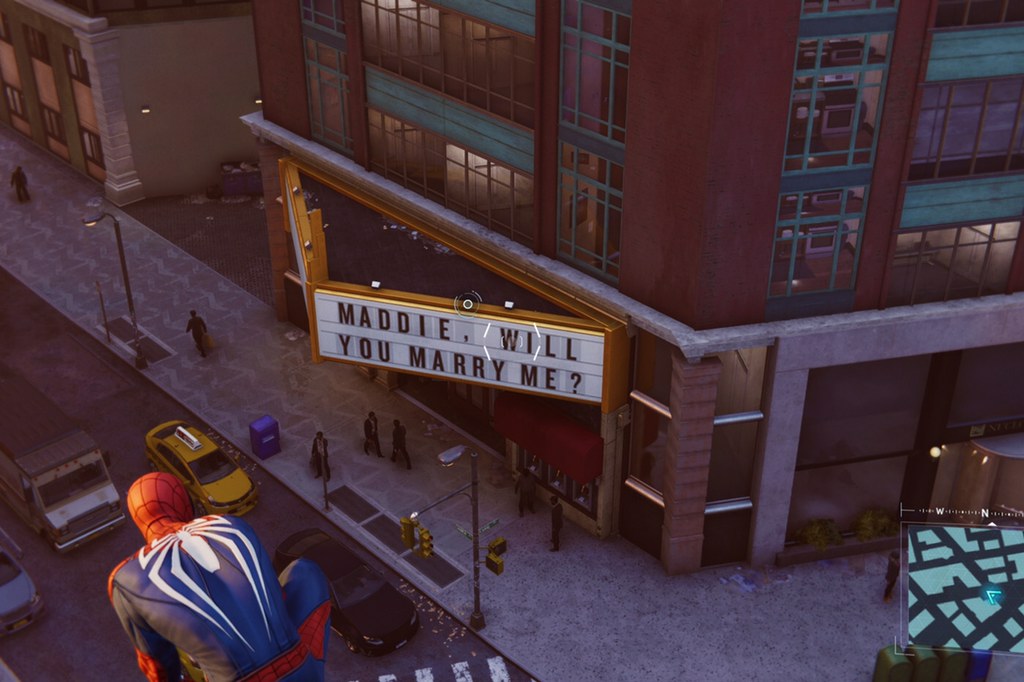 The ‘Saddest Easter Egg Ever’ has served as great fodder for countless hot takes in the last few days. It’s also inadvertently reignited some old GamerGate problems. Once again exposing how quickly self-described ‘Gamer’ communities will step up to harasses women. The initial story was kind of funny. Man proposes to girlfriend in game, its over before she even sees it and she doesn’t like video games anyway.

What was un-necessary was the airing of dirty laundry in public while telling this story. This could all have been avoided if the proposer had just avoided publicly shaming his ex-girlfriend. Instead we’ve been treated to the entire internet appointing itself arbitrator over both sides of the break-up.

This was a private break-up. No one wants all of their personal problems and flaws exposed on an international level. Break-Ups after that amount of time tend to be quite horrible experiences. It’s a shame that one side seems to have left with enough bitterness to want to publicly call the other out for choosing to not be with them. It’s still a situation that’s best kept private.

The online communities continued harassment and refusal to leave people to solve their personal problems in private is nothing less than harassment. It’s true the original proposer provoked this, but he’s been greeted with back-up of internet misogynists. It’s unacceptable behaviour and it needs to be called out and stopped. No one is obligated to accept a proposal from a guy who got it put in a video game. Toxic relationships are the business of those involved and those they chose to involve. Not something for bad side of the internet to spew their hateful venting at.