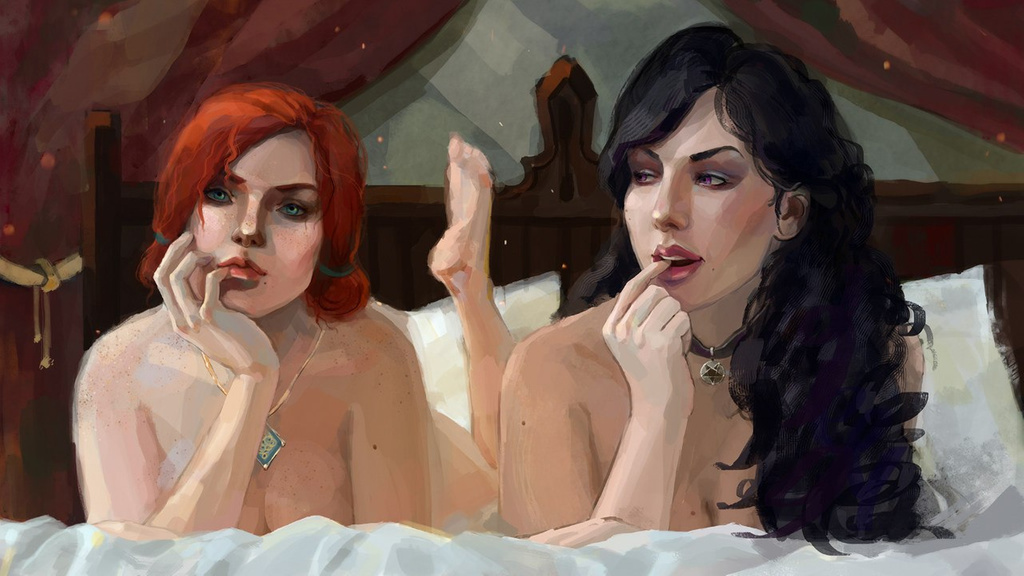 Ever noticed how tits ‘n ass are all we ever see in sex scenes? The Witcher has hundreds of sex scenes throughout the series, and yet, have you ever seen Geralt’s penis? It seems like every sex scene in any 18+ rated game is filled with boobs and naked females aplenty, but men’s genitals are almost too sacred to be shown on-screen. Women too have been given the ‘black bar’ treatment – covering their most private areas for fear of exposing some kind of monstrosity.  If a true sexual encounter were to take place in a game, the developers shouldn’t be half-assed about it, they should show the body the way it is, without the shame and stigma that seems to be attached.

Before we continue – a vocabulary lesson. Nudity implies being without clothes. Nakedness implies being exposed: being put on display for someone’s pleasure. Here’s my problem: sex in games exposes a woman’s nakedness. There is a feminist concept called ‘the male gaze’, meaning that art (in any form) is catered to men, and that women are depicted as unrealistically proportioned in such art. Have you seen Geralt being straddled by a ‘fat’ chick? It’s because games are still in the male gaze phase. Seeing as women are a relatively new addition to the gaming community, developers seem to be catering more to their (former) primary demographic. Women have been depicted unrealistically for centuries, because it was always men who were painting/drawing/animating them. Triss would not have been on the cover of Playboy if she had a potbelly. But here is the honest truth, ladies and (especially) gentlemen: women don’t look like that. Of course, men see Victoria’s Secret models and beautifully shapely women in the games they play, but take a look around when you come back to the real world: the most common shape for women is pear (when the hips are wider than the shoulders). Why? Because women were designed to give birth, and it’s difficult to push a miniature human out of this:

Therein lies the problem of society: assuming that women look like Triss or the shapely female Inquisitor in Dragon Age: Inquisition.  Real women obsess over this by dieting, wearing spanks, or even getting cosmetic surgery, just to live up to this standard of beauty. The tiny modicum of respect that I have for the Kardashians (it really is a tiny amount) stems from the fact that they have brought back the idea of ‘shapely’ beauty – with the exception of the fake asses.

If you think I’m speaking total crap, consider this:

This painting by Ingres illustrates my point perfectly. Ingres portrayed his idealistic vision of what women should look like, but only shows the ‘good bits’, and not the entirety of what a woman’s body is. This is as present today in the art of gaming as it was in the days of Ingres and Degas.

I’m sure you’re wondering what the hell this 150-year-old painting has to do with sex in gaming. My point is simply that the culture surrounding modern games still idealises women and treats their bodies with less respect than males. If you’re going to show the true form of a body, at least show it authentically, and yes, I include both sets of genitals in that statement. If you’re thinking “ew”, then you too are succumbing to the culture of the male gaze – men don’t want to see some other guy’s junk in a game, but a woman, fully naked, is great. On the other hand, we have Conan Exiles, in which you can literally customise the barbarian’s penis. Men playing Conan can feel ‘more manly’ by making an excessively large penis, but the issue I have is still relevant: Conan’s penis is not there for the pleasure of the viewer (or at least no more than the pleasure of living vicariously through a well-endowed video-game character), but instead a physical manifestation of masculinity and power.

In the ancient world, the penis was considered god-like. Most men still think this, but I mean it literally: centuries ago the male sex organ was considered the ultimate personification of manhood. There are hundreds of statues and sculptures that have been found depicting the penis as a manifestation of power. The Bible even has a verse along the lines of: “if a woman’s husband is in a fight, and the woman grabs the other man’s genitals, her hand must be chopped off without pity”. I’m not even kidding. Google it. Thus, I’m of the opinion that, while male nudity shows power and ultimate masculinity, female nakedness shows vulnerability, and the vagina is almost almost stigmatised (why can’t we customise the labia of our female characters too?). Developers currently put more effort into making the women in their games as sexy as possible, without giving their nakedness the power that Conan and his customised penis has.

I’m not a radical feminist: I’m not saying “boycott game-boobs!”, I’m simply pointing out that it is unfortunate that games are perpetuating the myth of the ‘perfect female body’. Even Mattel is on-board by giving Barbie a realistic makeover, thus breaking the cycle of young girls striving to look like a superficial and impractical version of a plastic play-thing (I’m talking about Barbie, perverts).

My point is: we no longer live in the ancient civilizations when the Bible was still in the drafting phase. We live in a modern society where women are allowed to vote, and even grab a guys junk without losing an appendage. A penis is just a penis. It is no more sacred than a pair of breasts or a vagina. Why then, are developers comfortable showing women fully naked, but rarely men? In fact, even films shy away from male full frontals. The argument that men are self-conscious about size is not good enough – don’t you think women feel the same about their breasts? That’s why boob jobs keep cosmetic surgeons in mansions and Bugattis.

If women are to be naked for the pleasure of men, then they should at least be portrayed more realistically, and digitally-unaltered penises should play just as important a role as the female body, in all its glory. Games will never stop depicting nakedness, but they can certainly improve upon making it more realistic. An RPG is a simulation of another person’s life. If there are sex scenes, they should be authentic. In life we don’t avoid looking at genitals during sex. It only makes sense to add realistic genitalia to gaming in order for full immersion to truly take place. I ask only that the women in these games stop being some idealised porn-star version of a sultry succubus, but instead, as a real woman, with flaws, and not as another Barbie doll for the adult world.