This year Pokémon turns 20. It’s a good time to look back on how the English speaking world welcomed Pokémon. A few years after it’s Japanese release, Poke-mania took the world by storm. The cartoon, the games, the endless merchandise, all of it was a fairly baffling fad for society. Explaining what this Japanese craze was took a lot of hot takes. Then the dangers also had to be found and explained.

The coverage is filled with confusion. Although strange, most of the misunderstanding comes from cynicism. A lot assumed that the collect-a-thon nature of the game involved shelling out for each individual Pokémon. Clearly a lot of work went into finding an alarmist interpretation of Pokémon. Writers stretched to make a harmless game into a problem.

Here are a selection of press clippings of the original reaction to the Pokémon craze.

A High-Tech Hybrid of Specimen Collecting and Cock Fighting

This article from the LA Times makes the astute observation that Pokémon is just a mixture between cock fighting and species collection. Not entirely wrong really. However, it then goes on to the hit the notes of the franchise being a cash grab.  Professor Oak gives you the first Pokémon as a freebie. However, the rest your’ll have to buy. Buying the other 150, with money, that’s got to be what its really about. That’s the accusation here. is probably a legitimate worry when it comes to merchandise and trading card, but this is an actual review of the game. The reviewer should have played Pokémon. Yet he seems completely unaware of core mechanics.

“Mine Was named Squirtle” He looked like a turtle. See how the naming system works? The killer Pigeon is named Pidgey.”

This is an unwarranted and frankly out of line assault on the objectively best Pokémon. Squirtle. Aside from this, the reviewer found the game hollow and empty. Nothing but limited battling presented in primitive Game Boy visuals. After he so successfully deconstruction a game he has played for all of 10 minutes of, this reviewer then raves about Motocross Madness.

The fear mongering is never far away. This article tries every angle to make the Pocket Monsters into monsters. Pokémon is built entirely around consumerism. It’s also taking advantage of youngsters and milking parents for money. It’s also a weird video game for an out of date system, lacking in the corrupting violence that kids usually go for. This is all in one byline, it is at once a positive influence compared to other games and an exploitative empty vessel for capitalism.

This article also includes a cute outro, that Nintendo’s goal is to try and sustain the popularity for the whole of two to thee years. That’s an eternity in the world of video Games.

This take on the series is surprisingly twee. Containing a pronunciation guide.

The Guardian‘s later takes continue the love-in. An affection-filled three page spread helpfully explains the anime to parents prior to the European release of the games.

“There are already 8429 pages about it on the Internet”

Is that how the internet used to work?

“If it all sounds like a bloodier version of Mortal Kombat, rest arrued; Pokemon stressed the virtues of strategy  loyalty and friendship rather than glorying in the pile-ups of gristle and internal organs; with it’s team building oaths of allegiance, and performance related rewards, it could be re-marketed as My First Management training Video.”

Pokémon, preparing the world for middle management paper pushing. Odd interpretation, but it does acknowledge the franchise is essentially optimistic in the lessons it teaches children.

“So those responsible for flooding the market with this deadly kiddie-narcotic? Pokemon is, in fact, the brainchild of one man; Satoshi Tajeri, described as a “Reclusive Genius” Practically nothing is known about him, except that he locked himself in his workshop for three years, emerging with Pokemon.”

A Narcotic Like Game. The myth building around the creation of Pokémon is also pretty notable. This article uses hyperbolic phrases and has some poor understanding of the game. (“We would say invest heavily in Beadrill and Kakuna” in reference to Pokémon cards) It’s still a very positive assessment of the craze.

There’s also this sweet exchange with a young Pokémon fan. The hearts take up 15% of their bodies.

“Craig Gibbs, a 16-year-old who has gotten Mew from a Nintendo store brags about his Pokémon prowess. “No. I am a Pokémon genius!” he declares “I can beat all the kids in my street and I can capture all 150 Pokémon in 12 hours!” That’s about 10 times faster than the average time it takes to complete the game (Though Nintendo’s Lucy Fortey doubts the veracity of his claim) Craig is now prowling around the mall challenging others to take him on….      Craig spends at least five hours a day playing Pokémon. Spit pools in the corners of his mouth when he speaks and he appears to have lost the ability to blink.”

This fascinating character paints quite a grim picture of what Pokémon does to your children. Another segment reveals a grim turn the cards have taken.

“The Cards aren’t banned at my son’s school yet.” Says a young mum. “But they will be. The kids have started gambling with them and paying money.”

Craig trawling the local mall lying to children is probably not be above ripping them off with gambling too. Parents should learn their lesson, Pokémon causes teenagers to loose the ability to control their spit or blink, and children to become gambling fiends.

Inevitably the religious faction found a reason to reject Pokémon.

“It is a singularly inappropriate gift for Christmas. The ideal Christmas gift is one that will draw a Person closer to Jesus. Whose birthday is being celebrated. The motto of Pokémon Is “Gotta Catch THEM ALL.” Which drives the hunger for more cards, games and logo material….”

This is a fairly typical criticism of the commercialisation of Christmas, and that bit gets a pass. The focus on the commercial aspects of Pokémon is probably fair, there was a lot of merchandise back then. The games themselves, with their focus on collecting, weren’t trying to sell you anything. You’d bought the game, they wanted you to sink enough time in to capture all the Pokémon. That children want merchandise for a popular fad is nothing new.

This particular one throws it insults so far and wide its hard to pick what to address. The section about sexual preoccupation is strange. Brock is not a latching pervert, he’s prone to crushes. It’s a non sexual type of attraction. Cross-Dressing Jerks too? What does that even mean? Which character are they even referring too? There is that one banned episode, but that aside what could possibly have inspired that comment?

The fun could not just last forever. Eventually crossing dressing jerks had to give way to Burger King fights and Card Sharks. A noticeable trend in most of this coverage is the trading cards being more to blame than the game or cartoon themselves.

“Being a ‘90s parent’, I’m not comfortable with allowing my children to engage in any activity I don’t understand. So, I launched an investigation to make sure Josh wasn’t being brainwashed into violent thoughts but characters marketed by Nintendo Corp…

I tend to shun pop culture, and I was relived when Josh ignored Power Rangers and Rugrats, but he’s not letting this one go.”

If anyone has any way of contacting Josh, assure him that Rugrats is fantastic.

You rarely see those 90s kid’s memes referencing how we were all raised by parents who had to understand any activity we were a part of. Most of this seems an attempt to genuinely understand something a kid is into. I it’s just a shame he’s into sexually preoccupied, cross dressing jerks. He’d have been better off playing Motocross Madness. 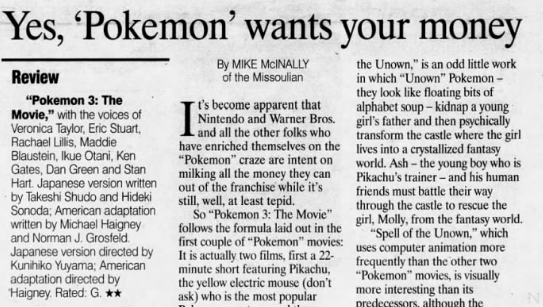 A few years later and the cynicism has increased, even if the scaremongering has largely subsided. This cutting from 2001 shows Pokémon could last another three years, and it still wants your money.